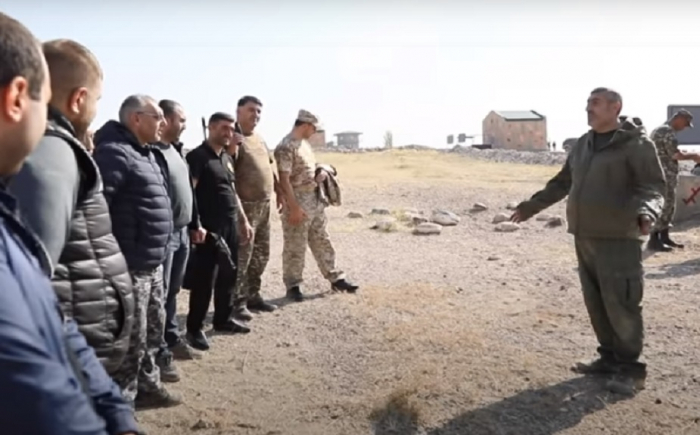 After the Azerbaijani troops broke through the defense line of the Armenian occupation forces and came close to the city of Shusha, panic broke out among the Armenian nationalists and the authorities of the separatist so-called "Artsakh". They no longer know who else can be thrown to the front to keep the occupied Azerbaijani territories of Karabakh. And then the names of the longtime sponsors of separatism and loyal servants of the Armenian lobby, the former aide to the President of the Russian Federation Vladislav Surkov and the former separatist "premier" of the separatist so-called "DPR" created in eastern Ukraine, Alexander Borodai, surfaced.

The fact that these people are absolutely unprincipled has long been known. Boroday himself bragged about how he was trading his former comrades-in-arms in the separatist war in Donbass, sending them as "cannon fodder" to various hot spots as mercenaries within the PMC.

“It is very good that Russian private military companies are entering the market, demonopolizing it, taking a piece of bread and butter and caviar from the Americans and the British, increasing their military and political influence in the world. Thus, they create new conditions on the market, bringing down prices ”- Boroday cynically admitted until recently.

And now there is a huge demand for "cannon fodder" from the Armenian invaders in Karabakh, who no longer have enough reserves and whose most combat-ready units have been destroyed and "ground up".

Surkov and Boroday urgently gather on October 31 a congress of the so-called "Union of Donbass Volunteers". The main issue that will be considered there is the sending of these very "volunteers" (or rather mercenaries) to Karabakh, which Alexander Borodai frankly admitted in a recent interview with the "Free Press" in the material: "Alexander Borodai: Russian volunteers are ready to go to war in Nagorno Karabakh "(
https://svpressa.ru/war21/article/280106/?fbclid=IwAR36CM0mR7Sk6NCceU3OEEVBhUqrRNQY_Iq5n8TCZzH1PXkL8wQwJVV49bk).

“- The issue of Nagorno-Karabakh is on the agenda of the congress of the Union of Volunteers of Donbass, because a large number of Russian volunteers are willing to go to Artsakh and help the people of Karabakh and Armenians in the fight against the Turks. This issue will be raised at the UDV congress, Borodai said ...

- Armenia is indeed a very important geopolitical point for Russia. Not to mention the fact that our military bases and border detachments are located there. Of course, Russia will have to intervene in the conflict if the war continues. Today it has no tendency to fade. It is clear that the immediate interests of Russia today are associated with developing Azerbaijan and, of course, with Turkey, with which we have common economic projects. However, one must understand that there have been insoluble contradictions between Turkey and Russia for hundreds of years, if Russia wants to maintain its positions in the Caucasus and Transcaucasia, it cannot allow the defeat of Armenia and Nagorno-Karabakh. " - said Alexander Borodai.

At the same time, the Armenian lobby, counting on former separatists and mercenaries from Donbass, as well as Borodai and Surkov, have certain problems. Greed and the pursuit of money led to the fact that Borodai and Surkov "wholesale" sold almost all of their "volunteers" - mercenaries from Donbass in various hot spots from central Africa to Libya.
And in order to again pull these mercenaries out of that even Africa and transfer them first to Russia, and then to Karabakh, time is needed. Not to mention the fact that there are obligations to those who have already paid them for the mercenaries, and they may not understand when the "cannon fodder" leaves the front before the end of the contract.

Therefore, traders in "living goods" urgently gather mercenaries and separatists who are in Russia on vacation or recovering from injuries. The names of those who have already spent their fees for previous military expeditions and promise new "generous earnings" in Karabakh (Armenians have money - they hint!). It is no coincidence that in his interview to Free Press, Borday speaks directly about the influence of “a huge Armenian lobby in the world, which exists not only in Russia, where about 3 million Armenians live, but also in the United States, where there are about the same number of Armenians and many of them are rich. and influential people."

Nevertheless, the contingent of mercenaries gathered by Surkov and Borodai is unlikely to be too efficient and motivated. Still, no matter how it relates to those who fought in the Donbass, they were mainly people from the outset "ideological" who fought for the "Russian world". And what kind of "Russian world" can there be for Armenian nationalists who heroize the Nazis?

Therefore, in addition to mercenaries, former separatists from Donbass, Armenian nationalists pin great hope on the "Javakhk" separatists from Georgia. And in every possible way they urge them to go to fight in Karabakh through the media. This very “propaganda material” was published in the “Sputnik Armenia” publication under the heading “A detachment of Armenian citizens from Javakheti prepares to be sent to the front in Karabakh” (https://m.ru.armeniasputnik.am/video/20201030/25120026/Otryad -grazhdan-Armenii-iz-Dzhavakhetii-gotovitsya-k-otpravke-na-front-v-Karabakh --- video.html). Here are excerpts and video from this material:

“The citizens of Armenia, natives of the Armenian-populated region of Georgia Samtskhe-Javakheti, have formed a detachment of volunteers to participate in the hostilities in Karabakh.

The initiator of the creation of the detachment was the deputy of the Armenian parliament Shirak Torosyan, according to the report by "Zinuzh Media" of the Armenian Defense Ministry.

“We have formed this squad and intend to make our modest contribution to the victory,” he said.

He noted that at the moment the squad members are going through all stages of preparation.

The detachment includes immigrants from Javakheti, as well as Armenian citizens living in this region of Georgia.

It should be noted that, according to paragraph 1 of Article 310 of the Criminal Code of Georgia, joining the military service of a foreign state or foreign organization to the detriment of Georgia's external security, as well as persuading other persons to commit such an act, is punishable by imprisonment for a term of five to eight years. Consequently, the citizens of Georgia - ethnic Armenians cannot fight in Karabakh.

“We decided to go to protect our borders, the security of our borders. We are ready to help ours in every possible way,” says one of the volunteers.
Another noted that everyone has a fighting spirit, and they are ready to defeat the enemy.

"Any Armenian, regardless of whether he lives in Armenia or abroad, must be aware of his mission in protecting his homeland, his historical land," said one of the volunteers.

See the video for more details.

Georgia should in no way allow separatist militants from Samtskhe-Javkheti to enter Karabakh from its territory. Since having gained "combat experience" these separatists will inevitably return to Georgia to fight for the secession of "Javakhk" and against the Georgian state and the Georgian people.