The settlement of Abkhazia by "Artsakh" Armenians is being prepared: "have pity on the unfortunate refugees" 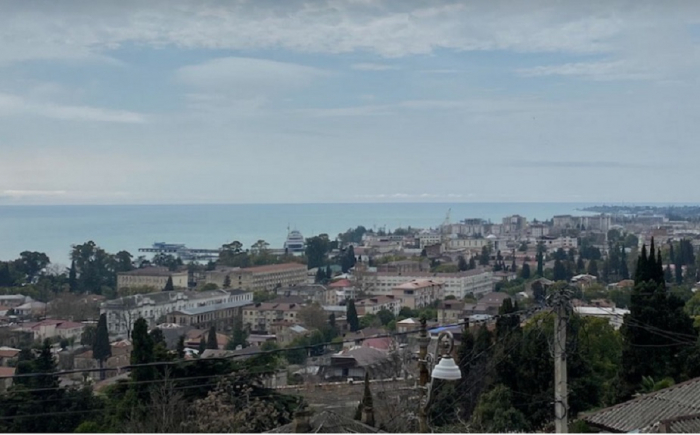 In fact, the Armenian lobby made a decision. The separatist "Artsakh", formed on the lands of Karabakh liberated by the Azerbaijani army today, is doomed and most of the Armenians living there will be evacuated. A decision has already been made where - to the separatist Abkhazia. But not a single Armenian media tries not to talk about it directly.

For one reason - not to show it to Georgia ahead of time. Yerevan does not want Georgian law enforcement agencies to "take up" the "fifth column" - the separatists of Samtskhe-Javakheti, as a real danger to the country.

After all, the news about the impending mass settlement of "Artsakh" Armenians in Abkhazia can make even the most "lulled" by Armenian speeches about the "brotherhood" of Georgian politicians "start to shake up". Georgian refugees from Abkhazia have not forgotten the atrocities of the battalion. Bagrayam and the fact that “long-suffering” Armenians, the descendants of refugees from the mythical Turkish genocide, live in their houses and apartments.

If today Georgians find out “ahead of time” that “brothers Armenians” want to finally and irrevocably settle in Abkhazia on Georgian soil and in Georgian houses, forever depriving Georgian refugees of the opportunity to return to them, the Armenian lobby fears that the reaction will be harsh. Georgian patriots will immediately raise the issue that separatism in Samtskhe-Jvakheti must be suppressed in the bud, so that the tragedy of the Georgians of Abkhazia does not repeat there.

Therefore, the Armenian lobby acts very cunningly. It begins to advertise secessionist Abkhazia as a “refugee haven”. Knowing the good attitude of Georgians towards Ukrainians, including those who, by the will of fate, found themselves "on the other side of the front line" in Donbass, they actively began to make informational stuff about how "well" these refugees are treated in separatist Abkhazia.

One of such materials “Forcibly displaced” with the subtitle “at the height of the war in Eastern Ukraine, more than 200 families from Lugansk and Donetsk found shelter in Abkhazia” (https://spark.adobe.com/page/X8BMuZAsjiQ71/) “Javakhk” separatists, jam-news.ne/ edition.
Here are excerpts from this material:

“Ilya moved to Abkhazia from the city of Luhansk in eastern Ukraine in 2010 to take care of his sick grandmother. And four years later, an armed conflict broke out in eastern Ukraine. Fleeing from the shelling, residents of Lugansk and Donetsk left their homes en masse. Some fled to Russia, others found refuge in Ukraine. When the wave of refugees or, in the official language, IDPs reached Abkhazia, Ilya opened a consultation and headed the Luhansk-Donetsk Diaspora….

“In April 2014, when the war began, I urgently left for Lugansk to pick up the rest of the documents, see what happened to the apartment, and, in principle, to understand how things were going. Ukrainian border guards did not let in for a long time, then they broke through with grief in half, but they could not get to the city. We came under fire twice ... We returned to the border. And there, on the Russian side, a huge refugee camp was set up. I went there and asked how to help. Everyone who learned that I was from Abkhazia said, go home, there you will be more useful".

In June 2014. Ilya returned to Abkhazia and immediately got down to business - to gather together immigrants from Eastern Ukraine to Abkhazia.

“To begin with, I tried to understand how many of us there were. It was very difficult, because there was no centralized information. People from Lugansk and Donetsk were reluctant to make contact, they were banal afraid. I managed to find about 15 families, we exchanged phones, kept in touch. In early 2015, international organizations - the United Nations Development Program (UNDP) and the Danish Refugee Council - helped a lot. They implemented projects here for repatriates from Syria, and I managed to somehow break in. Together we created a database and held the first meeting of the Diaspora, on more than 100 families came to her, and many had information about others who also lived in Abkhazia, but could not come. By the end of 2015, there were 205 families in our database "...

At the end of 2018, Ilya went home - he took the Abkhaz delegation of observers to the elections to the Luhansk People's Republic. There he met his future wife Vika. They got married in the summer of 2019, in the fall Vika and her daughter Sasha moved to Ilya in Abkhazia.

Unlike Ilya Vika, the war found itself in Lugansk.

“The first shots were in early May 2014. Gradually the shelling became stronger, we boarded up the windows, and Sasha was only two years old. You can't explain to your child why you can't go outside, she was capricious, wanted to walk. My brother was in the militia and when They took out the wives of the militiamen, he put us in this column, so in July we left with my daughter and mother for Krasnodar. A year later, the fighting more or less subsided, and we returned home".

Since 2000, Vika worked in the Luhansk regional hospital as a nurse, and then as a paramedic in the Ministry of Emergencies.

"In Abkhazia, at first there were difficulties with work. Usually there are not enough doctors everywhere, but since there is a medical school, there are a lot of junior medical staff. They took me to the ambulance, I think, because the head physician appreciated my work experience, I have the highest qualifications. I'm getting used to it, but the first duty is tomorrow. Schedule a day in three. "

In 2018, when Russia announced that citizens of the LPR and DPR would be able to obtain Russian passports, all international organizations stopped financial support, says Ilya.

In parallel with this, a massive outflow of refugees began to return to their homeland. The period of active hostilities stopped, it became safer, some LPR authorities restored housing, someone went to get a passport and received a lucrative job offer. "In general, many have left, there are about 90 families left, but these are unlikely to leave."

Despite the fact that Abkhazia does not officially recognize the independence of the LPR and DPR, the regime of entry into Abkhazia is simplified for their residents. For example, tourists with Lugansk and Donetsk residence permits are allowed at the border without a passport and without visas, upon arrival they just need to register with the police at their place of residence, and it is not a fact that someone will ask her when they leave. And if people want to move for a long time, then they need a work visa (it is issued for a maximum of a year) and a work permit. All together it will cost about 13-15 thousand rubles (160-190 dollars).

Ilya fought for a long time for the citizens of the LPR and DPR to be issued a temporary residence permit for up to 4 years. But since there are no diplomatic relations between Abkhazia and the LPR / DPR, this was not achieved”.

In general, everything is clear. Separatist Abkhazia recognizing the so-called. "Independence" so-called. "Artsakh" (which Armenia itself did not recognize!) And has "diplomatic relations" with it is ready to receive "Artsakh" Armenian refugees.

And they even inserted a “comforting” part into the ordered material, they say, don’t worry, how refugees from Donetsk and Lugansk are now returning to their homes, and the “Artsakh” Armenians will return.

No matter how it is! Having settled in Abkhazia, the "Artsakh" Armenians will not go anywhere. It was not for this that the Armenian lobby developed such a multi-step combination and tore away Abkhazia from Georgia, it was not for this purpose that it organized ethnic cleansing of the Georgian population here, so as now to miss such a "chic" opportunity to "move" the so-called "second Armenian state" from the Karabakh seas.

And the separatist regime in Sukhumi, which does not want to return more than 300 thousand Georgian refugees to their homelands, showed “kindness” towards refugees from Donetsk and Lugansk for a reason. 200 families of refugees from Donbass, who will sooner or later be “driven out” and “sent home” by representatives of the “ancient long-suffering people”, will not make the difference in separatist Abkhazia. But there will be a precedent for the settlement of the primordial Georgian land by refugees, but not by Ukrainians, but by Armenians.