Why did Armenia send its militants under the Parliament of Georgia? 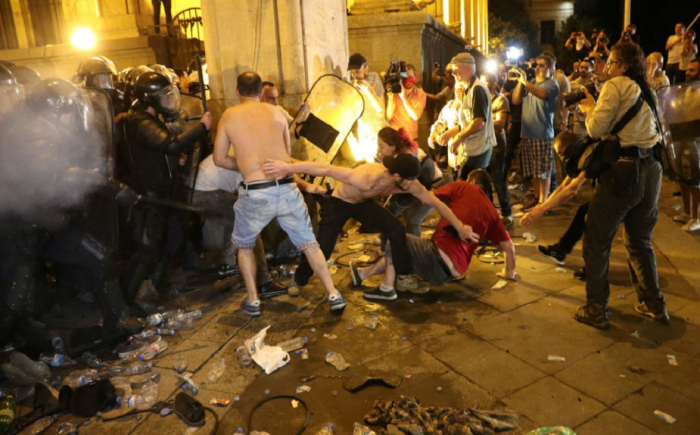 The Armenian-Georgian business forum held on June 28 in the Armenian Dilijan attended by Georgian Prime Minister Mamuka Bakhtadze made a dual impression. Of course, there were many “official speeches” about “friendship and cooperation”, but it was obvious that the head of the Georgian government had questions for Prime Minister Nikol Pashinyan. In particular: what did his associates do - the “revolutionary” Armenian militants on June 21 under the Georgian parliament.

Shot of chronicles make it possible to see that the attack on the Georgian parliament came “professionally”. There were clearly prepared provocateurs, there were attack aircraft, which apparently attacked the police on command, and they were coordinated by actions: some "retreated to the rear" in their place others advanced, who continued to "press" the police. There didn’t smell with "peaceful citizens" among the attackers on the police.

At the same time, despite the “operational evacuation” of Armenian militants, at least two of them have been identified.

One of them is a citizen of Armenia, Minas Miansyan, a representative of the Soros Foundation, an Armenian liberal and Pashinyan's associate. The Armenian Embassy in Georgia immediately rushed to rescue him, apparently on the direct instructions of Nikol Pashinyan. As a result, with the assistance of the Embassy of Armenia, Minasyan was released early on June 25 - and this is completely in vain, since it creates a precedent for the impunity of agents of the Armenian special services who are directly involved in this crisis in Georgia.

But there was another fighter - David Grigoryan. He truly, formally is a citizen of Georgia. But one wonders: why immediately when it became known that Grigoryan was injured under the Georgian Parliament during a failed assault - did the Armenian Foreign Ministry begin to worry about his health?

“Grigoryan was injured in the head. He was operated on, and now his doctors assess his condition as stable. Positive dynamics have emerged,” the press office of the Armenian Embassy in Georgia reported.

It was announced that Armenian diplomats visited the victim. The embassy is constantly in touch with doctors and promises to periodically inform about his condition.

Obviously, there were at least two Armenian "revolutionaries" who were under the Georgian parliament on instructions from Armenia participated in the assault.

These are those who suffered and who were detained. But there were others who "did not fall". How many were there? Obviously not one dozen or two.

This gives grounds to say that Pashinyan Armenia is directly involved in the attempt to seize Parliament in Georgia. The question is - why?

The fact is that the attempt of the state coup in Georgia coincided with a sharp aggravation of the Iranian-American relations. They spoke directly about the possibility of bombing Iran by American aircraft that the South Caucasus is the best base for such bombing. Especially in light of the fact that Turkey has made it clear that it will not provide its territory for an attack on Iran.

And in Armenia, after last year’s Maidan, a clear pro-American regime is in power. Besides, Armenia directly borders with Iran. However, in order to make Armenia a base for the US attack on Iran, it was necessary to imitate “breaking through a corridor” through Georgia. This would allow Pashinyan to openly and quickly break with Russia, take control of the Russian military base and, moreover, in return for “services” to support American aggression against Iran, demand recognition of the occupation of Azerbaijani Karabakh.

Well, the fact that as a result of the confrontation, Georgia will be on the verge of a civil war - the Yerevan regime also suited. After all, the collapse of Georgia allowed it to “grab” huge chunks of Georgian territory, the same Samtskhe-Javakheti.