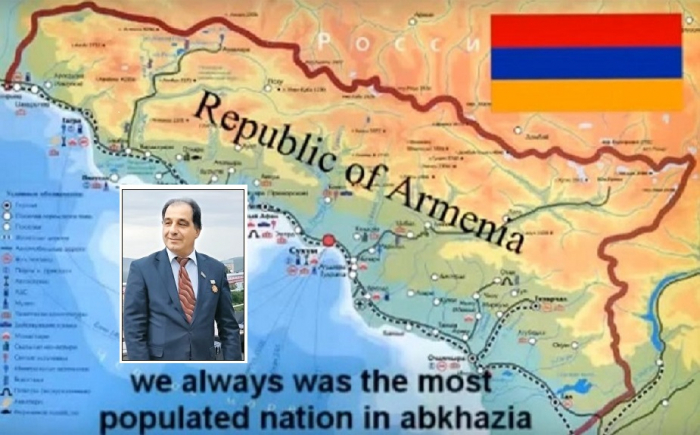 In order to predict where the Armenian nationalists will create their "second Armenian state" after (as recent events show) the almost inevitable loss of Azerbaijani Karabakh, one should read their "program" media. One of these is the Russian-language edition "Noah's Ark", full of all the traditional Armenian nationalist "attitudes": the myth of "genocide", "Artsakh", "Great Armenia" and so on.

With the outbreak of hostilities in Karabakh on September 27, during which the Azerbaijani army, step by step, began to liberate their native land from the Armenian invaders and separatists, it would be logical to expect a whole series of extensive “Artsakh” materials and interviews in such a publication. But it never happened. The "core" article in No. 8 (331) October 2020 of the "Noah's Ark" publication was the material by Grigory Anissonyan under a very eloquent title: "Galust Trapizonyan: Abkhazia has a great future."

Here is the beginning of the article:

The Armenian public is "broadcast" about the prospects of Armenians in Abkhazia, none other than the former commander of the thugs of the Baghramyan battalion, and now, in fact, the "shadow leader" of separatist Abkhazia, who has an official post in the separatist government, Galust Trapizonyan. The fact that the current separatist "president" Aslan Bzhania is a puppet in his hands, Galust Trapizonyan immediately makes it clear:

“I was the confidant of the presidential candidate Aslan Georgievich Bzhania. During the election campaign, we visited many regions of Abkhazia, including those where the Armenian population lives. A lot of fruitful work has been done. At meetings with voters, Aslan Bzhania emphasized that representatives of the Armenian diaspora, like other national diasporas in Abkhazia, should be represented in state structures, actively participate in all spheres of the republic's life.

Aslan Bzhania's victory in the presidential elections in the republic was convincing. This was noted by Russian President Vladimir Putin. The election result showed that the difference between the number of votes cast for other candidates in favor of Aslan Bzhania was more than 20 thousand."

And then Trapizonyan notes with satisfaction that the puppet is listening to the "master":

“- Three months have passed since the election of the new President of Abkhazia. Are your campaign promises being kept?

- They have already been implemented. For the first time in Abkhazia, in the Armenian regions - Gulrypsh, Sukhumi - the posts of the deputy head of the administration have been created, to which our compatriots have been appointed. In these areas, the Armenians have never entered the power and administrative structures. After the presidential elections, the situation changed. Aslan Bzhania has repeatedly said that the local population should have a representative in the district administrations. And it's done.
The Armenian population is represented in the presidential administration, in particular, in the protocol department, in the information department. Our compatriots, among whom are young people, work today in the government of the republic, sit in parliament. It is safe to say that the policy of Abkhazia, a multinational republic, in terms of nationality has changed. Aslan Bzhania emphasizes in his speeches that "we are united" and all together must build the Abkhaz state".

To what extent the separatist "state" will be "Abkhazian" is a big question. However, there is no doubt that it will be "Armenian" and despite the fact that the Armenians are seizing key posts in the separatist government.

The fact that in fact all the key issues in separatist Abkhazia are resolved by Trapizonyan, he does not even hesitate to say:

“The committee headed by me unites several important directions at once, which are given increased attention in the republic. All projects implemented in accordance with the Investment Program of the Russian Federation in Abkhazia must undergo technical supervision. During the tourist season, consumer supervision is also important - supervision over the quality of products and the food sector. Energy supervision is equally important. Thus, the powers are broad and the responsibility is high."

Let us recall that the separatist regime lives exclusively thanks to the so-called. “Investments” from the RF budget. And also thanks to the free electricity received from the Inguri hydroelectric power station. And all this is under the control of Galust Trapizonyan. And Aslan Bzhania is actually just an obedient puppet with him. He is a “talking doll”, so to speak, designed to speak official speeches (which the Armenian “masters” will dictate to him in advance) and to pretend that Abkhazia is still ruled by the Abkhaz.

Galust Trapizonyan does not bypass the issues of "separatist unity" of Abkhazia and the so-called. Artsakh:

“After the collapse of the USSR, the CIS-2 was formed - Abkhazia, South Ossetia, Transnistria and Nagorno-Karabakh. The presidents of the four unrecognized republics met in Abkhazia and signed agreements on interaction and cooperation.
Abkhazia has the warmest relations with Artsakh. The new presidents of Artsakh and Abkhazia were elected with a difference of one month, they congratulated each other and exchanged plans to visit the republics. I am convinced that our relationship will deepen and expand. The prospects are most favorable, including at the diplomatic level, consuls have been appointed.
Recently, Artsakh hosted a football championship among unrecognized states. The football team of Abkhazia was greeted with bread and salt, Abkhaz flags were fluttering at the stadiums. We can do a lot together in the development of sports, culture, communication of young people.
I hope that both Abkhazia and Artsakh will live in peace. There is peace in Abkhazia, because it is protected by Russian troops. Unfortunately, the situation in Artsakh is alarming, but I am sure that the leadership of the republic will do everything possible to achieve peace. "

Trapizonian's last phrase should be understood in such a way that he hopes that Russian troops will help Armenia to hold the occupied Azerbaijani territories. But there is also a hint that if this does not work out, then the Armenians already have Abkhazia "being taken over". It is for the protection of the Russian troops and the foreign land seized by the Armenian nationalists will not be taken away from them so easily.

And Galust Trpizonat touched on the church issue very interestingly:

“- There is an Armenian church in Gagra, tell us about the history of its construction.

- The construction of the Armenian temple of Surb Amenaprkich is a great achievement of the Armenian community, the Church Council, the religious community of Abkhazia, as well as the population of the republic. The church was built not only by the Armenians.
The history of its construction began with the creation of the Alley of Heroes, which we decided to open in memory of 244 Armenian children who died in the Abkhaz-Georgian war. I fought with them, I was one of the commanders, I myself was seriously wounded, I lost my leg.
To create the Alley of Heroes, to perpetuate the memory of the heroes, I turned to Vladislav Grigorievich Ardzinba, who was then the chairman of the Supreme Soviet and whom I knew well. We were given a place in Gagra on the rise of the bypass road.

- You were the initiators of this project?

- Yes. When we started building the Alley, it became clear that a chapel was needed. And we installed it. But the chapel was small and could not accommodate everyone. And then it was decided to build an Armenian church. We turned to the then Prime Minister Socrates Rachevich Jinjolia and received permission and a place for its construction near the Alley of Heroes.
Together they raised money, but there were very few of them. Then they turned for help to the Armenian South Russian Diocese in Krasnodar since there is no Armenian Diocese in Abkhazia. The head of the diocese, Bishop Movses Movsesyan, supported us. In Krasnodar, we met Andrey Mikhailovich Amosov, a well-known public figure, philanthropist, thanks to whose financial assistance the construction of a church in Gagra became possible ...
The opening of the temple was attended by the leadership of the Republic of Abkhazia. More than 40 Abkhaz families baptized their children in the Armenian temple. Russian families also baptize children in our church.
During the recent events on the Armenian-Azerbaijani border, a rally was held near the church, which was attended by the deputies of the parliament of Abkhazia and the city leadership. An appeal was made to end hostilities and restore peace."

This revelation by Galust Trapizonyan shows the real attitude of the Armenian Apostolic Church (AAC) towards Georgia and Georgians. Not only does it absolutely illegally claim at least 442 Georgian churches officially, but it is also building its churches in the occupied Georgian lands in memory of the militants guilty of the genocide of the peaceful Georgian population of Abkhazia. And after that, these bitter enemies of the Georgian people, glorifying their murderers, militants and terrorists, still say something about "Christian solidarity" ?!

It turns out that killing neighbors and seizing their homes, not letting Christian refugees to their native land, in the understanding of Armenian nationalists, is "Christian". And also to claim hundreds of shrines of the "brotherly" Christian people.

And Galust Trapizonyan mentions very interestingly about Ruben Tatulyan, who does not even hide his intention to become the next “president” of separatist Abkhazia after the Armenian nationalists decide that they no longer need the “screen” in the villa of the puppet Aslan Bzhania:

“The name of Ruben Tatulyan is well known in Abkhazia, his contribution to the development of sports and education in the republic. Ruben Tatulyan provides financial assistance to general education schools - Abkhaz, including the Gagra secondary school No. Chamagua, Russian and Armenian. Finances the training of elementary students at the Abkhaz State University. Supports the development of sports, which was repeatedly noted by the head of the State Committee for Sports of the Republic of Abkhazia Gubaz Dzhemal. Ruben Tatulyan takes an active part in arranging football fields and gyms, providing Abkhaz footballers with uniforms. Participates in many humanitarian actions. Taking this opportunity, on behalf of the Armenian community, veterans of the Patriotic War of the people of Abkhazia and myself, I would like to express gratitude and gratitude to Ruben Tatulyan for his activities for the benefit of society."

The material in "Noah's Ark" kind of "consoles" the Armenian nationalists, who realize that they cannot hold Karabakh. Say, do not worry, we have land for a "second Armenian state", in where the best natural and climatic conditions, on the seashore... Under the protection of "Russian bayonets". Where churches are glorified and built in honor of the militants who killed Georgians - this is like a hint that the same "needs to be done" for the Armenian separatists in Samtskhe-Javakheti.