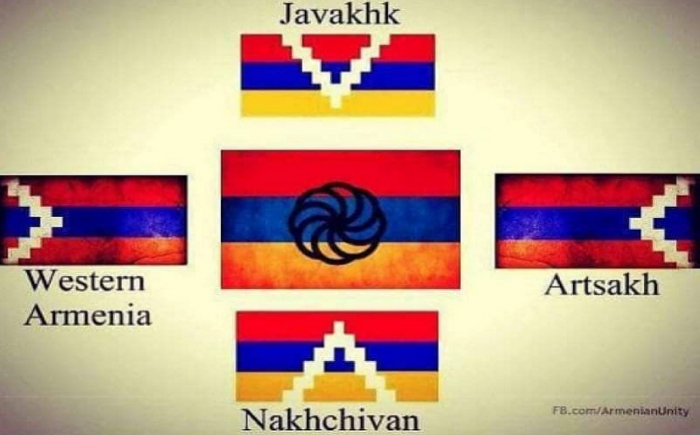 It seems that the Yerevan regime, which today suffers a crushing defeat in the Azerbaijani Karabakh occupied by Armenia, begins to understand that initially the aggression against Azerbaijan and attempts to announce its territories were a mistake. However, the Armenian nationalists, of course, cannot refuse to try to seize foreign lands. If it did not work out to do it "in the eastern direction", then, most likely, they will strive to do it in a different direction.

And the first in their plans, by all indications, is the northern, "Georgian" direction, where in fact, with the help of Russia and local separatists, they have already managed to snatch from Georgia one of its best corners - Abkhazia.

Having been "driven out" from Azerbaijani Karabakh, the Armenian aggressors are likely to start a new war. And to pick up for this a weaker enemy in their opinion.

And here it should be remembered that even on the eve of the collapse of the USSR, when voting at the Dashnak congress for the priority direction of Armenian expansion, the now miserably collapsing "Artsakh" direction received only one vote advantage over the "Javakh" one. That is, directed towards the Georgian Samtskhe-Javakheti.

It seems that Nikol Pashinyan also remembered this, who perfectly understands that defeat in Karabakh is almost inevitable and could be the end of his political career.

Pashinyan posted on his Facebook a photo of a recent rally by local Armenians in the Samtskhe-Javakheti region of Georgia, indicating the name of the region as “Javakh”. And not in Armenian, but in English. Those. Pashinyan does not even want to particularly hide his claims to Georgian lands. Official Yerevan is already making an application for its claims to the Georgian land: recall that on Armenian maps, Armenian nationalists mark Samtskhe-Javkheti as “Javakhk”, depicting this Georgian land as part of “Great Armenia”.

It is possible that the Pashinyan regime will try, after the defeat in Karabakh, by mobilizing the remnants of the Armenian army, as well as terrorists and militants gathered from all over the world, to immediately ignite a new war against Georgia. This time, according to Yerevan's plans, a victorious one, which, as the Armenian nationalists hope, should at least end with the expansion of the territory of "Great Armenia" in the northern direction, namely, in the direction of the Georgian Samtskhe-Javakheti, and at the most, with the destruction of the Georgian state and "breaking through the corridor" to the sea and to Abkhazia, already in fact captured by the Armenians.

Preparations for this aggression have already begun in fact. The Armenian society is being turned against the Georgians and Georgia, thanks to which, in fact, Armenia exists, since practically all the transit of vital goods goes through the Georgian territory. The fact that Georgia has banned the transit of weapons and militants to Armenia through its territory only testifies to its constructive position and desire for peace in the South Caucasus region. But this is exactly what wildly outrages the Armenian nationalists and they send curses to Georgia.

In addition, separatist Abkhazia and the Tskhinvali regime, where, first of all, are the Russian occupation forces, may open a "second" and "third" front against Georgia. The Abkhazian Armenian community, which in fact has seized control over Georgian Abkhazia and is guilty of the genocide of the civilian Georgian population, will inevitably come to the aid of its "Javakh" fellow tribesmen.

Proof that Armenian nationalists are resolute and belligerent towards Georgia is the recently published article by Nils Harutyunyants on the Armenianreport website “Sobering up“ indignant ”Georgians, where, in addition to insulting the Georgian people, they directly threaten Georgia with war. Here are excerpts from this material:

“A formal reason for“ indignation ”has been found in Georgia. Moreover, traditionally quiet, without the involvement of the leadership of this country, which, being a neighbor, behaves openly treacherously and meanly towards Armenia and Artsakh. The Georgians were “outraged” by the photo that Armenian Prime Minister Nikol Pashinyan shared on his official Facebook page.

This is a photo signed by Javakhk. So what? What is the problem? The prime minister shared the photo on his social media page. Should he ask the Georgians for permission to do this? How else should Nikol Pashinyan sign the photo from Javakhk? He had to write that it was San Francisco, Marseille or Krasnodar Territory? It seems that the neighbors are completely lost.

After all, they know to whom Javakhk belongs historically. They know that Armenians have historically lived and live there. They even know that many other territories of Georgia, including their capital Tbilisi, are historically Armenian cities. But they continue to portray "indignation." And, I repeat, not even daring to express it officially.

This is the whole nature of Georgians. For the most part, these are cowardly people, constantly trying to justify their problems with different "explanations". They are trying to convince the whole world that they have “heroically lost” the war for South Ossetia to the Russians. Although in reality it is all about the weakness and cowardice of the Georgian army. The Americans trained her for many years, they also stuffed her with the most modern weapons. But in the end it didn't help.

Because Georgians are not warriors. This is a nation of lovers of table toast, choral singing and wine consumption in huge quantities. That is why they lost in August 2008 to South Ossetia, whose fighters had the main advantage - high spirit, courage, willingness to die for their native land. Yes, the Russians helped them in some way. But, I repeat, the Georgians were supported by the Americans for many years!...

As for the Georgians, they help Azerbaijan by prohibiting the delivery of humanitarian supplies to Armenia and Artsakh. Including the one collected by the Armenians of Javakhk. To say that this is meanness is to say nothing. Georgians are trying to prevent our victory over the Turkish-Azerbaijani armada….

We will have to show the Georgian side all our political power by increasing pressure on politicians in the United States, France and Russia to support Javakhk. Plus, having dealt with the Turkish-Azerbaijani military clique, we will be able to demonstrate to the Georgians all the might and fortitude of the Armenian warrior. They themselves are forcing us to this, acting treacherously at the most fateful moment for our people".

Georgia should expect Armenian aggression. The southern neighbors are already actively preparing for it and are setting their population up for a war against the Georgians as, they say, a “cowardly people”.

To dispel these illusions of arrogant Armenian nationalists, Georgia must now prepare for the worst scenarios. And naturally, to take tough measures against the Armenian "Javakh" separatists.