An attempt to illegal transit of weapons through Georgia to Armenia was suppressed: military equipment "in diapers" 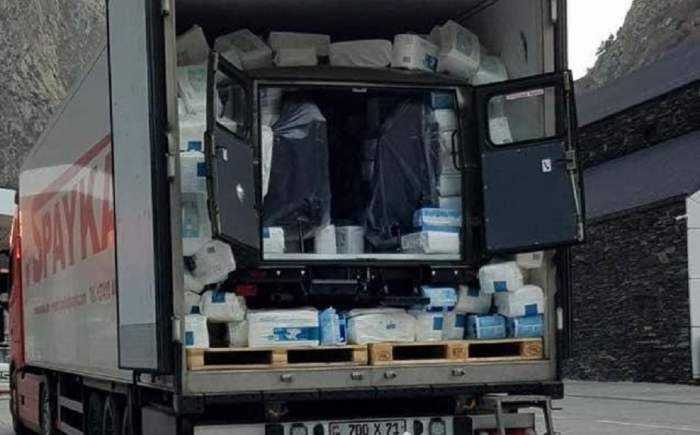 The situation with the armament of the Armenian occupation army, which is now suffering a crushing defeat in the Azerbaijani Karabakh, is critical. Not only that, already some of the weapons (including tanks, artillery pieces, mortars) went to the Azerbaijani army as trophies. Believing that Russia would once again fight for them, the Armenian aggressors did not equip their units with equipment adequate to the conditions of modern warfare and did not create sufficient ammunition reserves. Moreover, they hoped to the last that Georgia would succumb to their pressure and allow the transit of weapons and military equipment not only through its territory, but also through occupied Abkhazia and the Tskhinvali region.

One Georgian leadership took a position in line with national interests and completely closed its borders for the transit of all types of weapons. At one time, Armenia had a “corridor” through Iran, but firstly, the Russian military transport aviation would have to make a significant “detour” over the Caspian Sea for this, and secondly, the Azeris of Iran were outraged by the supply of the aggressor through Iranian territory. As a result, the regime in Tehran is forced to carry out transit semi-legally and secretly. And as you know, you can't carry a lot of weapons.

In desperation, the Yerevan regime employed even high-ranking government officials and diplomats to transport weapons. So at the beginning of October, Deputy Prime Minister of Armenia Mher Grigoryan went on a visit to Moscow. And although it was officially announced that the purpose of Grigoryan's visit was to hold a meeting with his Russian counterpart Alexei Overchuk, in reality he went to Russia with a different purpose. There was information that the Deputy Prime Minister of Armenia is trying to bring weapons from Russia on a civilian plane.

Grigoryan, leaving for Moscow on a civilian plane belonging to Armenia, wanted to load weapons and ammunition into this plane and bring them to Armenia through the airspace of Georgia. This information became known to journalists, the Russian bureau of APA sends a request to the Ministry of Foreign Affairs and the Ministry of Defense of Russia and, apparently, the mass transfer of weapons by Pashinyan's deputy did not work. As a reminder, in accordance with the rules of the International Civil Aviation Organization and the International Civil Aviation Convention, it is prohibited to carry weapons on civil aircraft.

As a result, the Yerevan regime began feverishly to seek other ways for the illegal transfer of weapons. Since the situation at the front is critical for the Armenian invaders, he began to transport military equipment in trucks with "peaceful" cargo, simply throwing them in a hurry.

And just recently, an attempt to smuggle weapons across the Armenian-Georgian border was prevented. A vehicle with military equipment was hidden in a truck belonging to the Spayka company (Armenia). Weapons and military equipment were simply "thrown" with packages of household goods, apparently with diapers and the like. Moreover, they did not even really disguise a military vehicle. Throwing away several packs of "diapers" Georgian customs officers discovered the prohibited cargo. Naturally, it will be confiscated in favor of the Georgian state.

Georgian customs and law enforcement agencies should dramatically increase their vigilance at the border. Armenia, as an aggressor striving to keep occupied foreign lands, will try to smuggle weapons through Georgia in any form: in diapers, in bananas, covered with grain, etc. All trucks and containers going to Armenia are carefully checked. As well as those coming from Armenia. After all, there were many cases before when Georgian customs officers and border guards detained radioactive materials at the border. And today the Armenian terrorists may well organize the illegal transportation of radioactive substances for the production of a "dirty" bomb, from which Georgia and the entire region of the South Caucasus may suffer.