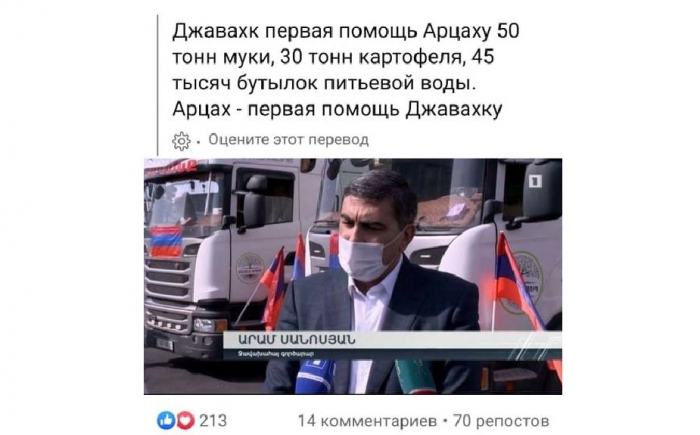 After the so-called “Hayastan All-Armenian Fund” launched a fundraising campaign “We and our borders: all for Artsakh” in the municipalities of Akhalkalaki and Ninotsmida of Samtskhe-Javakheti region, it became obvious that illegal financing of terrorism and separatism is taking place in Georgia. at the expense of Georgian citizens (albeit of Armenian nationality).

Thus, due to the Armenian nationalists and separatists, Georgia, in fact, is being dragged out and become a country on whose territory funds are collected for international terrorism and separatism.

Judge for yourself - today in the occupied Azerbaijani lands in Karabakh, in addition to terrorists from the Kurdistan Workers' Party, whose militants were actively transferred to the Armenian occupation zone on the eve of the military provocation of the Armenian armed forces on September 27, the terrorist organization ASALA is openly operating and fighting with Azerbaijani troops. Meanwhile, ASALA has long been listed in the register of international terrorist organizations, which is responsible for the mass of terrorist attacks and dozens of killed Turkish diplomats and statesmen.

Moreover, if someone thinks that ASALA and other Armenian terrorists will "leave alone" Georgia, then they are very mistaken. Georgia has already been registered as "enemies" by the Armenian nationalists alongside Turkey and Azerbaijan, and the Armenian youth is already being treated in the way that Georgians are a people hostile to Armenians. Here, for example, is a video that shows how young Armenians are today towards Georgians.

That is, the Armenian lobby incites hatred of the Georgian people. In principle, Armenian nationalists are already waging an undeclared war against the Georgians (just remember the atrocities of the Baghramyan battalion in Abkhazia), but at any moment this war can be officially declared. And then what? ASALA will begin to "hunt" for Georgian diplomats and Georgian citizens around the world, just as it is doing today for Turkish diplomats and citizens. But Georgia, unlike Turkey itself, does not have its own special services that could counter terrorism around the world.

Armenian nationalists and separatists in Samtskhe-Javkheti, collecting money from Georgian citizens on the territory to help the separatist "Artsakh" and the ASALA terrorists, are no longer even shy. When assigning funds, they directly write that this is “assistance” to Artsakh. ” Although they could have written that something is not so obvious ... For example, "for humanitarian needs", "assistance to the civilian population", etc. But no - the money is intended specifically for militants and terrorists, and for the war.

At the same time, lists of donors and donations to “Artsakh” are openly posted on the social network. Those. Armenian "Javakhksie" separatists are no longer afraid of anything. Although they know very well that the financing of terrorism and support for separatism is prohibited by Georgian law. What does this mean? Is it not about the fact that they are simply sure that the time of 'Javakhk' is about to come. And it will come according to their plans for anyone.

If the Armenian invaders in Karabakh are defeated (and this is almost 100%), the surviving Armenian militants and terrorists will be thrown into reclaiming lands for “great Armenia” in the direction of the weakest neighbor of the Armenian state - Georgia.

If a miracle happens and the invaders somehow keep Azerbaijani Karabakh, then, all the same, the Armenian state project will not last long without access to the sea. That is, they will still break through the "corridor to the sea." And if possible, and to the already de facto Armenian separatist Abkhazia.
Any activity of the separatists and their open and brazen fundraising for the separatists of "Artsakh" and the terrorists of ASALA on the territory of Georgia, the gathering of militants, the organization and mission of battalions of "volunteers" to Azerbaijan is a threat to Georgia and a violation of its laws. This must be stopped immediately, the perpetrators must be arrested and brought to justice, and all funds raised by them to support separatism and terrorism must be confiscated.