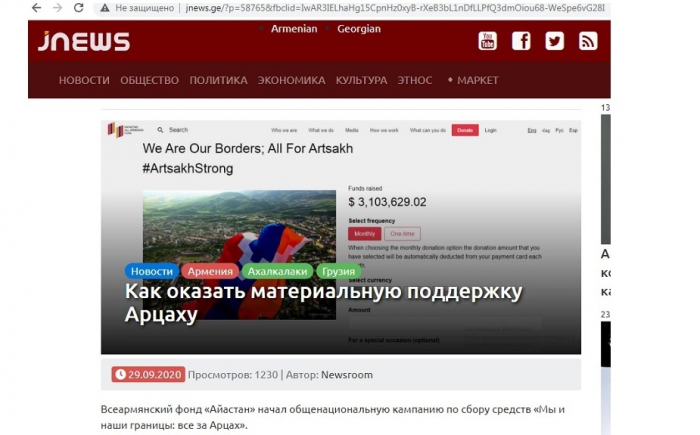 After the start of the counter-offensive of the Azerbaijani army in response to the armed provocation of the Armenian occupation forces in Karabakh, Armenian nationalists around the world launched an anti-Turkish and Azerbaijani campaign. At the same time, countries that have friendly and good-neighborly relations with Turkey and Azerbaijan may also come under attack. And Georgia may become the first victim of Armenian terrorist and separatist activities.

Moreover, there is a great danger that the defeat of the Armenian invaders in Karabakh and the loss of control over these Azerbaijani lands will force them to urgently start expanding the borders of "Great Armenia" in another direction - "Javakhk". In the very one, which at one time lost only one vote to the "Artsakh" direction of the Armenian aggression.

We are also talking about a possible Armenian military-terrorist strike with a simultaneous separatist rebellion in the Georgian region of Samtskhe-Javakheti, through which the most important transit routes for the Georgian economy pass. Armenian extremists and separatists have already begun to block these highways. In particular, under the pretext that, allegedly, by trucks from Turkey to Azerbaijan through Georgia, "weapons are being transported" on September 29, local Armenian separatists blocked for some time a strategically important road connecting Georgia and Turkey in the region of the Armenian-populated village of Kartsakhi.

Law enforcement agencies of Georgia managed to quickly unblock the road. But the actions of the Armenian extremists, perhaps, are explained by the fact that the Georgian authorities, unfortunately, practically did not react to the open gathering of militants for sending to Karabakh, which is punishable under the Criminal Code of Georgia? The recording of the militants took place in broad daylight on September 28 at the central stadiums of Ninotsminda and Akhalkalaki.

It turns out that the Armenian extremists and "Javakhk" separatists are becoming impudent every day, violating Georgian laws, carrying out open sabotage against the Georgian state and its economic interests of Georgia with impunity.

Armenian media and resources registered in Georgia with the .ge domain propagandize separatism, recruitment and organization of groups of mercenaries to be sent to the war in Azerbaijan in the Samtskhe-Javakheti region, openly announce the collection of funds among Georgian citizens of Armenian ethnicity to finance terrorism in the territory of friendly Azerbaijan ... After all, as you know, terrorist groups recognized throughout the world, in particular ASALA, are fighting against Azerbaijan in Karabakh.

Here is an example of such agitation on the separatist resource jnews: "How to provide material support to Artsakh" ("http://jnews.ge/?p=58765&fbclid=IwAR3IELhaHg15CpnHz0xyB-rXeB3bL1nDfLLPfQ3dmOiou68-28WeSpe6v on fundraising “We and our borders: all for Artsakh”.

The question is: what does the Georgian region of Samtskhe-Javakheti have to do with the Armenian "borders"? Or have the Armenian nationalists already included it in their borders as they draw them on the maps of “Great Armenia”? Looks like ...

Unfortunately, no one is punished for such illegal and anti-state criminal acts as recruiting mercenaries and raising funds for financing terrorism. This leads to the fact that the calls of Armenian nationalists and separatists against the Georgian state are becoming more and more impudent.

Anti-Georgian calls are openly disseminated on social networks. Here, for example, is an example of such a call by Karen Oganesyan, which essentially announced plans to organize a separatist rebellion in Satskhe-Javkheti and put strategically important transport transit routes passing through this region under the control of Armenian extremists. 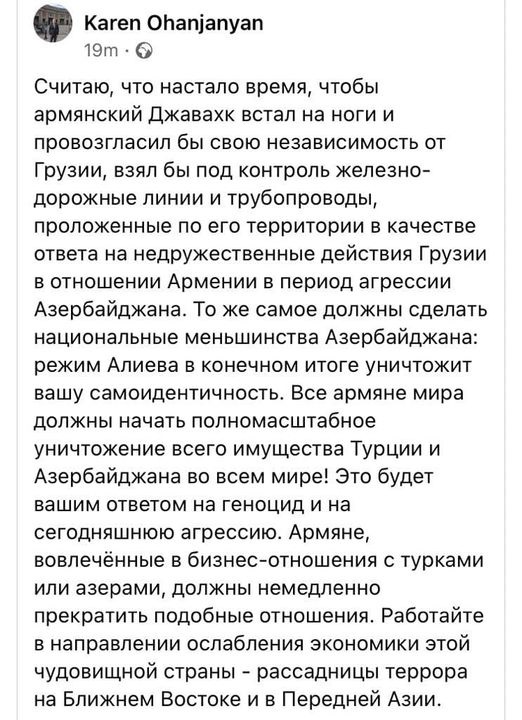 The Armenian lobby already has fighters in order to implement this plan; there are also clandestine warehouses with weapons in the Samtskhe-Javakheti region left from the time the Russian military base was here. Therefore, if the illegal and anti-state activities of Armenian separatist and nationalist organizations are not stopped in the near future, the consequences could be the most tragic for Georgia. As follows from the appeal of Karen Hovhannisyan under the pretext that there are Turkish and Azerbaijani investments, terrorist attacks and sabotage are possible against these objects. This can be the most disastrous.

Indeed, if there are terrorist attacks on gas pipelines and oil storage facilities of the same SOCAR company, this can lead to tens and hundreds of victims, as well as paralysis of the entire energy infrastructure of Georgia.

We call on the law enforcement agencies of Georgia to immediately respond to the threats of Armenian extremists against Georgia and against the strategically important transit through the Samtskhe-Javakheti region, urgently take measures to bring to justice separatists and extremists organizing the recruitment of militants, raising funds to finance separatism and terrorism, as well as those who call to the violation of the territorial integrity of Georgia and strikes on its strategically important communications. 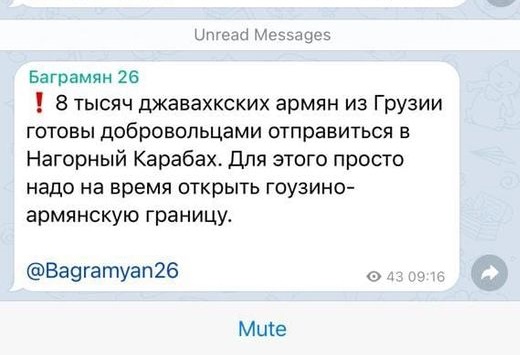