Recruiting militants from Javakheti and breaking them into war is a mortal danger for Georgia. 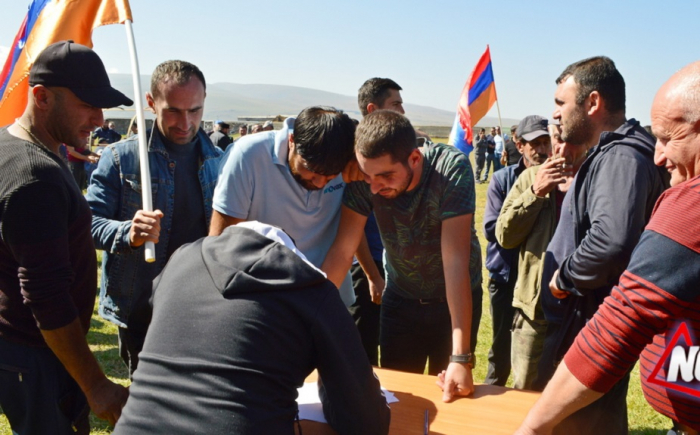 With the beginning of the aggravation of the military situation in the Azerbaijani-occupied Karabakh, after the Azerbaijani troops launched a counteroffensive in response to the Armenian provocation and began to liberate the occupied territories, the Armenian nationalists and separatists in Georgia became sharply active. And this is no coincidence.

The point is that the Armenian army and separatist formations of the so-called "Artsakh" are suffering a crushing defeat. The Armenian occupants are sorely lacking troops and militants to close the resulting "holes" at the front. Therefore, the recruitment of Armenian terrorists and militants began around the world.

The Armenian aggressors are pinning great hopes on the replenishment of their ranks with militants from the Georgian Samtskhe-Javakheti, where more Armenians actually live today than in Karabakh, which had been deserted during the years of occupation. However, how brazenly and defiant Armenian nationalists and “Javakhk” separatists are recruiting militants and how they are trying to illegally break through the Georgian border, closed due to quarantine, raises serious concern for the fate of Georgia.

Recording of the militants took place openly in broad daylight in Ninotsminda and Akhalkalaki, and in the very center of the cities, at the stadium named after the brothers Vladimir and Gayos Garslyans in Ninotsminda and at the Akhalkalaki stadium in the city of Akhalkalaki. The separatists enthusiastically shared this in their media.

First of all, you need to be clearly aware that the recruitment and dispatch of Georgian citizens of any nationality to participate in hostilities outside Georgia is prohibited by the legislation of our country and is prosecuted in accordance with the Criminal Code. Everyone who carries out this recruitment, conducts its propaganda and informational support, as well as the militants themselves, should be immediately arrested and brought to trial and punished.

In principle, such measures are in force in Georgia with regard to recruiters of ISIS fighters and ISIS fighters themselves. However, why nothing is being done to prevent the recruitment and transfer of militants for the war as part of the separatist formations of the so-called "Artsakh". After all, we recall that during the 1992-1993 war in Abkhazia, it was the “Artsakh” militants who had been tested in Karabakh who made up the most brutal and most efficient part of the militants of the infamous battalion named after Baghramyan, who distinguished himself by atrocities against the peaceful Georgian population of Abkhazia.

Today, extremists of Armenian nationality, separatists are recruiting militants and mercenaries in the central squares and stadiums of Georgian cities and preparing them to be sent to the war. Moreover, to the war against the most important economic partner and friendly Georgia of the neighboring country - Azerbaijan, which fully supports its territorial integrity of Georgia and has always come to Georgia's aid in difficult times. Unlike Armenia, which, in fact, through the same "Artsakh", openly supports the separatists in Tskhinvali and Sukhumi and recognizes their "independence".

There is no doubt that most of the militants recruited in Samtskhe-Javkheti, those who get to Karabakh and do not find their own grave in Azerbaijani soil, will return to Georgia. Those who went through the war and received the necessary military experience. And already here they will form the backbone of separatist militants fighting for the separation of Samtskhe-Javakheti from Georgia.

Moreover, if the Armenian occupation army, together with the "Artsakh" separatist militants, suffers a crushing defeat in Karabakh (and everything is heading towards this), then together with the "Javakhk" militants who fought with them, the remnants of the Armenian and "Artsakh" armies will move to Georgia , as well as their fighting brothers from among the Armenian militants and terrorists from all over the world. These are tens of thousands of notorious thugs. The Georgian army will have to fight them - despite the fact that there will be more "fronts" in the occupied Abkhazia and Tskhinvalx region. It will be a disaster for Georgia.

A mortal danger for Georgia is also the fact that the Armenian militants do not intend to stand on ceremony with the territorial integrity of our country and the inviolability of its borders. This was shown by the events of the night of September 28-29, when a crowd of Armenian extremists and separatists for the war in Karabakh broke through and will continue to break through the Georgian-Armenian border.

The video showing how Armenian extremists with Georgian citizenship are trying to illegally cross the border of Georgia with Armenia in order to participate in hostilities and demanding that Georgian border guards let them pass is a clear example of what is happening in reality.

They openly declare to the Georgian border guards that the Armenian militants do not go as "tourists" but to the war, who are forced with difficulty to contain the crowd of militants and extremists that is many times larger than them. So far, it seems unarmed. But if you allow them to cross the border even unarmed, then they will definitely return to Georgia and always with weapons. And most likely they will definitely fight against the Georgian state in the near future.

After all, as you know, Armenian nationalism is also considered the Georgian Samtskhe-Javakheti "original Armenian land" "Javkhkom", as well as Azeri Karabakh ("Artsakh" in the terminology of Armenian nationalists). Therefore, it is not clear why the Georgian law enforcement agencies are inactive? Why weren't the militants, recruiters and provocateurs detained not in Ninotsmida and Akhalkalaki, or while trying to illegally cross the state border?

There is also no doubt that after the militants failed to break through the official checkpoint, they will seek to cross the Georgian-Armenian border illegally. Moreover, this border has been illegally "shifted" almost throughout its entire length by the Armenian border guards towards Georgia, where by hundreds of meters, and in some places by kilometers. It often passes through hard-to-reach mountainous areas or forests.

Throughout the entire length of the Georgian-Armenian border, it is urgently necessary to strengthen its protection. To guard the border, there is to transfer additional units of the border service, army and police. Every kilometer of the border should be under control, since those militants who will now cross it to the Armenian side without weapons after just a few weeks may again storm this border, but from the other side and with weapons.

And then it will not be they who will "tearfully beg" the Georgian border guards to let them through, as can be seen in the video when they tried to break through on the night of September 28-29 at the checkpoint. The horrors of ethnic cleansing of the Georgian population of Abkhazia may be repeated throughout the country, primarily in Samtskhe-Javakheti and Kvemo Kartli.

It is not clear why the Georgian government underestimates the dangers for the Georgian state and people of the current indulgence of the Armenian separatists, when it is “not noticed” that the Armenian extremists are violating the laws of Georgia and are recruiting militants in broad daylight ...?