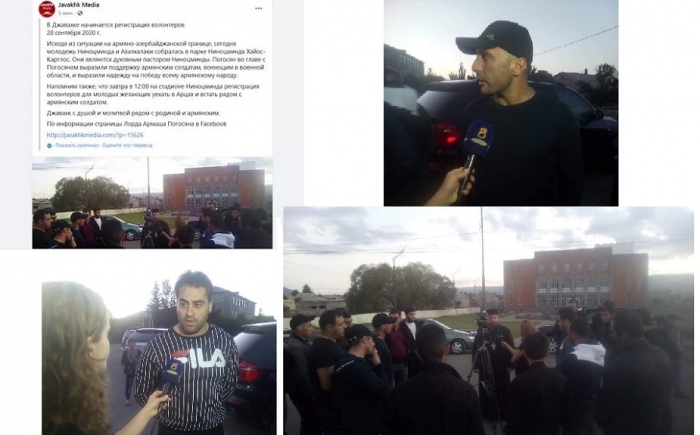 As “Kavkaz-Plus” predicted, the Georgian region of Samtskhe-Javakheti, infected with separatist sentiments among the Armenian population living here, is becoming the center of support for aggressive separatism throughout the entire South Caucasus region. On September 28, in the center of the city of Ninotsminda, at 12:00 pm, a recording of separatist militants begins to be sent to the war as part of the Armenian occupation troops in the Azerbaijani territory occupied by Armenia in Karabakh. The militants' recruitment was announced on the Facebook page of the separatist Javakhk Media and on the website nor.ge.

Thus, it turns out the citizens of Georgia, i.e. a country that itself suffered from separatism and 20% of whose territory is occupied; countries where more than 300 thousand refugees cannot return to their homes are sent to occupy foreign lands and arrange ethnic cleansing.

However, initially the basis for separatism was also created in Samtskhe-Javakheti. Today, the separatists here not only hold their mass gatherings of militants (under the guise of supposedly "peaceful rallies"), but intend to send these militants to the war to help them acquire full-fledged combat experience. In order to then use them against Georgia. Like “Artsakh” Armenia, Armenian nationalists do not even think to give up the Veda thesis of “Javakhk”.

In addition, one should take into account that the gathering of militants organized by the separatists in Ninotsminda is absolutely contrary to the legislation of Georgia. Generally speaking, from the point of view of the Georgian Criminal Code, the recruitment of militants and mercenaries to participate in armed conflicts outside Georgia is a criminal offense. Those who do this should be brought to justice.

Not to mention the fact that at the same time on the territory of Georgia, in fact, there is a creation of illegal armed formations acting in the interests of another state, and these interests fundamentally contradict the state interests of Georgia. Georgia, firstly, fully supports the territorial integrity of Azerbaijan, and secondly, is a friendly state to Azerbaijan.

It is unacceptable for the citizens of Georgia, who of any nationality, to participate in hostilities against a friendly country of Georgia. And another danger lies in the fact that these militants, having returned from the war on foreign territory, may inflame internal turmoil and internal conflicts in Georgia itself. We must not forget that a large Azerbaijani national minority lives in our country, against which the Armenian nationalists are already organizing all kinds of provocations.

We call on the law enforcement agencies of Georgia to prohibit and suppress the illegal activities of separatist organizations in the Samtskhe-Javakheti region and bring their leaders to justice. In no case should any citizen of Georgia be sent abroad as a fighter or mercenary of illegal armed groups. Or as part of a foreign (in this case, Armenian) occupation army for military operations against a state friendly to Georgia and a key economic partner.

Information resources that propagate separatism, call for the collection and recruitment of militants and their sending to a war contrary to the interests of Georgia, which itself suffered from separatism and the occupation of its territories, should be closed as violating the laws of Georgia. This also applies to a number of sites in the ".ge" zone, which cover not only the life of the Armenians of Samtskhe-Javakheti, but also take a clearly nationalist and separatist position. By promoting separatism and announcing the recruitment of militants, they violate the laws of Georgia and are hostile to both the interests of the Georgian state and the internal stability of Georgia.