By appointing a special manager, the Communications Commission is unlawfully appropriating the ownership rights to the company – Revaz Kopaladze 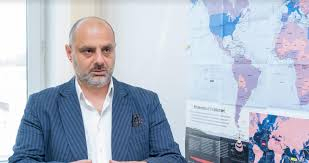 In 2019, the company NEQSOL Holding purchased a 49% stake in the telecommunication firm Caucasus Online for $61 million. There followed a sharp reaction from the Georgian National Communications Commission (GNCC) and the Georgian government. The GNCC stated that the deal was not agreed with the commission in advance, therefore requiring punitive actions against Caucasus Online. It demanded that the company reverse the transaction and restore the pre-sale status quo.

GNCC and the Georgian government decided to resolve the issue through legislation changes, bringing up the package of changes to the Parliament. Many experts, politicians and foreign diplomats identified the dispute between GNCC and Caucasus Online as the real reason behind the proposed changes. According to the experts, the law was exclusively changed for one company, despite opposition from all local and foreign businesspeople operating in the field of communications. The government forced the changes through and got the Parliament to adopt the bill despite strong arguments and hard discussions.

The new law is viewed by constitutionalists as unconstitutional and deeply damaging for the business environment. It has caused outrage at the international level. As for Caucasus Online, the company plans to submit its case to the Constitutional Court within the next few days.

Ipress spoke to the CEO of Caucasus Online, Revaz Kopaladze, about the events surrounding the company.

The case of Caucasus Online and the amendments to the Law on Electronic Communications have attracted the attention of international experts. Influential diplomats such as Matthew Bryza and Kurt Walker have publicly stated that the government is exerting pressure on business. Has business been visibly affected by the state actions in the shape of financial penalties and the subsequent legislative changes?

The main enemy of business is a lack of clarity – not knowing what will happen tomorrow. As you know, GNCC has been planning to revoke our authorization for almost a year now and has been threatening to appoint a special manager for the past few months.

Although neither one of these actions has been implemented at this stage, the company’s reputation and financial sustainability have been severely damaged. Caucasus Online is the largest wholesale internet provider in Georgia and the wider region. Our clients are delivering services to tens of millions of customers on the retail market. Naturally, our business partners are scared when the state exerts pressure in this manner. They start looking for alternative service providers to feel more secure, thereby reducing our company’s revenues and weakening our entrepreneurial activities.

Moreover, it is impossible to enter into long-term agreements in the current climate, at a time when our business model is built precisely on such long-term relationships. The company should currently be thinking about its future development plans, such as becoming Georgia’s digital hub and expanding its geographic presence. Instead, we must fight for survival, which damages not only us, but the country’s competitiveness.

I must also address the main problem facing the company. I can confidently say that Caucasus Online employs the best professionals in this field not only in Georgia, but the whole region. They practically shaped this company from day one and are proud of the service they provide the population with. These people have been hearing for more than a year that the company may cease to exist. It is not difficult to imagine the stress and uncertainty that they feel.

A few days ago, British Minister Wendy Morton stated that she is familiar with the Caucasus Online case and will continue observing the developments with interest. Why do you think this issue has become so important for such high-level officials?

The right to property and freedom of entrepreneurship are organically interconnected core values that apply to developed countries and are the only way for Georgia to achieve success. Countries and people who support Georgia are therefore reacting sharply to the campaign that is being conducted against Caucasus Online.

British organizations are implementing grant programs in Georgia that aim to improve the investment environment in the country. To quote a government minister, “the UK-based fund GGF is oriented towards reforming the public management systems in Georgia and improving the quality of work performed by the Parliament. Our goal is to rectify institutional faults and fight corruption. GGF supports the dialogue between the government and investors for the purpose of improving the business environment.” It was inevitable that diplomats would take note of the Caucasus Online case.

Your company has already announced that it intends to lodge an appeal in the Constitutional Court. When will this happen, and how would you assess your chances of success?

We are in the process of preparing the claim and will be lodging it within the next few days. Regarding our chances, I am confident that the Constitutional Court will decide in our favor. What may be immediately evident is the fact that the way in which this new law amendment was rushed through undoubtedly affected its quality. The law has no substance and lacks numerous important documents - studies, and assessments. You can see for yourself that documents relating to any consultations performed during the process of preparing the law simply do not exist, as no such consultations ever took place.

Most importantly, this inadequate piece of legislation is incompatible with the Georgian Constitution and international legal standards. The law affords unlimited powers to the GNCC with regards to intervening in the business activities of private entities and limiting their entrepreneurial freedoms. The law blatantly states that the special manager who may be appointed by the GNCC will be granted the combined powers of virtually everyone, from directors to the board of directors.

It is particularly important to note that the courts will have no advance control over this process. For that reason, I find it difficult to believe that the Constitutional Court will not rule in our favor and confirm that this piece of legislation, which was ‘discussed’ late during the night and rushed through, is unconstitutional.

Through these legislative changes, the government has legalized the institution of a special manager. Are you now expecting such a figure to be appointed in your company, and what would it mean for you? Are there any similar control mechanisms in other countries?

The GNCC demanded that Caucasus Online reverse the sale of shares by one of its beneficiary owners. However, it is impossible for the company to reverse the purchase of third-party shares. It is also clear that a special manager would not be able to do so either. Therefore, if such a figure is indeed appointed, it would mean that the Communications Commission is unlawfully appropriating the ownership rights to the company. Such a move would increase pressure from the international community and significantly damage the investment environment. I therefore hope that such an appointment does not actually come to pass.

With regards to international examples, you probably know that a well-known consulting firm is currently implementing a study for us, aiming to establish any precedents for the existence of the institution of a special manager in the European Union. The findings of this research are due in a few days, so let us not get ahead of the events.