Salome Zourabichvili: Our country is not ready to put up with the damage done to human life and human rights by occupation 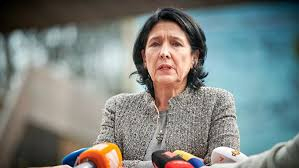 Our country is not ready to put up with the damage caused to human life and human rights by occupation, - Georgian President Salome Zourabichvili said in her speech at a high-level meeting of the UN General Assembly dedicated to the 75th anniversary of the United Nations.

According to her, "the future that we want" is based on four principles:

"The first is peace. The Secretary-General's call for ceasefire has not yet been considered. Although Georgia sees the consequences of isolation of the Russian-occupied territories on a daily basis, our country is not ready to put up with the damage done to human life and human rights by occupation.

As new paradigms are being created in the world, the time has come to develop new visions and solutions to change the unbearably frozen situation. Peace and development are the only way of development.

The second is a viable planet. We have all witnessed how lockdowns had a positive impact on our environment and changed our perceptions. We, as a small country, think that regardless of whether our actions affect the global picture or not, we can still play an experimental, albeit exemplary role in shaping the overall strategy.

The third is an inclusive and healthy society. The spread of coronavirus woke everyone up. Georgia responded to the pandemic in a timely manner and was able to minimize its impact on the vulnerable population. This has been made possible through a "triangle of trust" created by the public, medical authorities and state, and in close collaboration with international partners. Trust and solidarity will be crucial for our societies to develop the resilience they need for tomorrow.

The fourth and last, though not the last, is an educated citizen in a culturally developed society.

Despite threats relating to information reliability and security, the development of the Internet has created new opportunities for education, culture and creative growth.

Citizens with knowledge and skills are the only and main resource for future development," the President said.