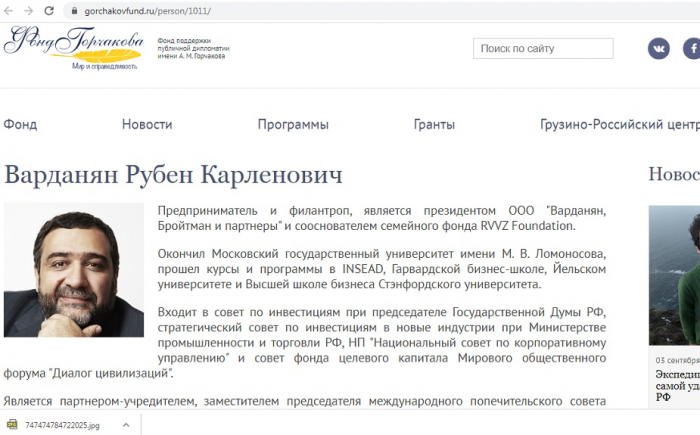 Recently, external forces hostile to our country have sharply intensified in Georgia, guilty of the occupation of more than 20% of the territory of Georgia and the ethnic cleansing of the Georgian population in Abkhazia and the Tskhinvali region, which set their ultimate goal to eliminate the Georgian statehood. Among them, the main operators of the Kremlin's influence that finance the "Georgian" pro-Kremlin organizations are:

1. Rossotrudnichestvo. It finances almost all Georgian pro-Kremlin organizations. Rossotrudnichestvo is headed by Evgeny Primakov Jr., the grandson of the former head of Russia's foreign intelligence. The strategy under his leadership has changed. We switched from inconspicuous work to more active work. He deals with Georgia with special zeal.

2. The Russkiy Mir Foundation. There is also no office in Georgia. Office in Moscow. Vyacheslav Nikonov is in charge.

3. The Gorchakov Foundation. His "Georgian-Russian Public Center" is openly operating in Georgia under the guise of the Georgian surname of the director of the Center, Dmitry Lordkipanidze, who conducts the Kremlin's policy in Georgia through articles, disinformation campaigns, conferences, contacts with pro-Kremlin figures. Lordkipanidze, like the Alliance of Patriots or his friend Nikoloz Mzhavanadze, the Objective TV channel and others, support all disinformation campaigns against the security interests of Georgia, including promoting the Kremlin's “non-involvement” in the 2008 war, occupation, inciting hatred by neighbors and between diasporas.

4. KSORSG (Coordination Council of organizations of Russian compatriots of Georgia). They receive money from various Russian funds, which are mainly supervised by the Ministry of Foreign Affairs. KSORG is not seen in the aggressive policy of the Kremlin and is mainly engaged in intercultural cooperation.
(Information on organizations was distributed by a page on FB "Border zone").

At the same time, in the aforementioned organizations, even with formal “Russian” leaders, the “first fiddle” is played by persons who are not at all Russian. For example, the Coordinating Council of Organizations of Russian Compatriots in Georgia (CSORGC) is a member of the World Coordination Council of Russian Compatriots Living Abroad. In order to understand what kind of "compatriots" is coordinated by this organization leads one of the latest news posted on its website:

“By tradition, on the Day of Family, Love and Loyalty, the strongest married couples were honored at the Russian Cultural and Information Center in Sofia. The medal "For Love and Fidelity" was awarded to Marina Dadikozyan, Chairman of the Coordination Council of Russian Compatriots in Bulgaria, and her husband Antonio. For many years, Marina Anatolyevna's husband has been helping her in social activities.

The families gathered for the celebration were beautiful and happy, each in its own way. Accepting congratulations from Olga Shirokova, head of the Rossotrudnichestvo office in Bulgaria, Archimandrite Vassian, rector of the ROC Compound in Sofia, and Archpriest Eugene, Counselor of the Russian Embassy, Alexei Novoselov, they spoke about their lives, according to the website of the Russian Cultural and Information Center in Sofia.

The holiday in honor of the Orthodox saints Peter and Fevronia of Murom is celebrated on July 8, but its celebration in Bulgaria had to be postponed due to restrictions on holding mass events associated with the coronavirus pandemic. "

The question arises: fraternal Slavic Orthodox peoples - Russians and Bulgarians themselves cannot be friends without Armenians? After all, there are a lot of Russians living in Bulgaria, Bulgarians living in Russia, thousands of mixed marriages ... There are a lot of people directly related to Russia who would be happy to represent the interests of Russia in Bulgaria. No, it turns out that Russian-Bulgarian friendship is unthinkable without Marina Dadikozyan.

It becomes clear what nationality people are "coordinating Russian compatriots" around the world from Moscow and in various countries of the world, even those very close to Russia, both in origin and religion.

The figures of the same nationality in Georgia are also promoting "Russian-Georgian friendship". It comes to a paradox - the Russians of Georgia, for years have not been able to get from the "organizations of Russian compatriots" not only help, but also minimal attention to their needs. But the "compatriots" of the Armenian nationalists get the opportunity to study in the Russian Federation, travel, receive grants and other support.

At one time, the chairman of the International Union of Friends of Russia and at the same time chairman of the Union of Armenians of Tbilisi Mikhail Tatevosov played almost the first violin in this organization. But his exorbitant ambitions were not liked by other "Russian compatriots", including those of Armenian nationality. As a result, Tatevosov "parted" from the KSORSG, but the activities of this "coordination council" in the interests of the "ancient people" and Georgia's southern neighbor as a whole remained the same.

It is unnecessary to talk about whose interests the Gorchakov Foundation is promoting, given that the founder of the foundation of the Russian Foreign Ministry, headed by Armenian nationalist Sergey Lavrov Kalantarov, and in the Foundation's Board of Trustees, the main role is played by Ruben Karlenovich Vardanyan, among whose regalia is “a member of the Central Board of Directors All-Armenian Benevolent Union (AGBU), as well as a member of the Supreme Religious Council of the Armenian Apostolic Church (Armenia) ”.

Formally, "pro-Russian" organizations, in fact, in Georgia are discarding the orders of Armenian nationalists, whose goal is not even concealed - the termination of mutually beneficial cooperation between Georgia with Turkey and Azerbaijan, "cutting" of transit energy mains going through Georgia. We have already written about the separation of Samtskhe-Javakheti from Georgia many times. At the same time, these organizations sow xenophobia in Georgia, incite interethnic and interreligious conflicts, hypocritically declaring "the protection of Christian values", prepare the ground for the mass seizure of Georgian Orthodox shrines by Armenian nationalists, primarily 442 churches for which the Armenian Church has already put forward official claims.