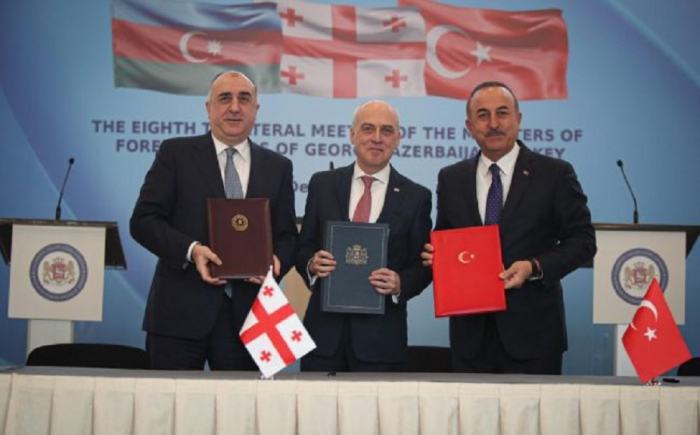 The fifth column inside Georgia and the pro-Armenian media outside of it have begun another round of the campaign to whip up anti-Turkish and anti-Azerbaijani hysteria in relation to Georgia. Naturally, the so-called "Alliance of Patriots" working for Yerevan immediately distinguished itself by placing posters where Adjara was painted over as "occupied territory" - meaning, of course, the alleged "Turkish occupation", about which the Armenian lobby began broadcasting day and night.

A lot of clearly ordered materials also appeared on this topic, among which the article by Peter Makedontsev in the pro-Armenian Russian edition of Eadaily "Turkey and Azerbaijan subjugate Georgia and aim at Armenia" (https://eadaily.com/ru/news/2020/08 / 29 / turciya-i-azerbaydzhan-podchinyayut-gruziyu-i-celyatsya-v-armeniyu).

This article generally begins with a simply blatant "accusation" of Turkey that it does not seek, like Armenian nationalists, to dismember and destroy Georgia, but supports its territorial integrity! And this support is declared to be no less "intervention":

“Turkey was the first country to recognize the independence of Georgia on December 16, 1991, and on May 21, 1992, Ankara established diplomatic relations with it, following the United States. The importance of Georgia for the Turkish establishment as evidenced by the fact that already at the end of 1992, during the official visit of Prime Minister Suleiman Demirel, the Treaty on Strengthening Friendship, Cooperation and Mutual Security and the Declaration on Peace, Security, and Cooperation in the Caucasus Region were signed. Moreover, Ankara immediately intervened in the internal politics of Tbilisi, since on October 13, 1992, the Turkish Grand National Assembly declared its support for the territorial integrity of Georgia. "

So, it turns out that the statement of the Turkish Grand National Assembly back in October 1992 at the height of the separatist war against Georgia in Abkhazia, unleashed largely by the Armenian lobby, in which Armenian militants participated in supporting the territorial integrity of Georgia, this is "interference in internal affairs." And then how to consider the participation of Armenian militants, in particular the battalion named after Baghramyan, in the war in Abkhazia and the genocide of the Georgian population? And Armenia's regular vote at the UN General Assembly against the return of Georgian refugees? This is not interference in internal affairs?

Meanwhile, Turkey, like Azerbaijan both then and now, has acted and are acting as friends and reliable neighbors of Georgia. The same cannot be said about other neighbors.

Here, for example, is the recognition by Yerevan through the so-called “NKR” puppet created in the occupied Azerbaijani lands. "Independence" of the separatist Abkhazia, and the so-called. "South Ossetia" - what is it then? Isn't this interference in the internal affairs of Georgia? As well as regular mutual trips of delegations of Sukhumi, Tskhinvali and “Artsakh” separatists through Yerevan to each other?

And Yerevan's support for separatism in Samtskhe-Javkheti - what is that then? And what about the arrogant claims of Armenian religious organizations to 465 Georgian churches located on the territory of Georgia?

Armenian nationalists can shred the territory of Georgia, arrange ethnic cleansing on it, claim Georgian shrines - and this is not considered "interference in internal affairs"! Should Turkey, at a critical moment for Georgia, officially declare that it supports the territorial integrity of Georgia - and this immediately became an "intervention"?
Armenian nationalists are outraged that Georgia was not given to them "to be devoured" - is it so?

After all, for many years all the Armenian and pro-Armenian media have been repeating the same thing - Georgia must disintegrate, everything in Georgia is "Armenian", Georgia has no right to exist within internationally recognized borders, and so on. etc.

Moreover, Eadaily brazenly "swaps" the aggressors and occupiers on the one hand and peaceful economic partners on the other. It turns out that Turkey and Azerbaijan, which supply gas to Georgia and ensure energy security, train Georgian special forces, help build Georgia’s defense, have built transit routes that replenish Georgia’s budget — this is supposedly a "danger" for Georgia. And the Russian occupation troops standing near these highways and the Armenian army "moving the border", ready to cut them at any moment, are presented as the "benefactor" of Georgia:

“The next milestone in bilateral relations is the signing of an intergovernmental agreement on the Baku-Tbilisi-Ceyhan oil pipeline project by the Presidents of Georgia and Azerbaijan and the Prime Minister of Turkey on November 18, 1999. There is an oil pipeline along the route Baku oil-bearing region - Ganja - Tbilisi - Batumi, running parallel to the main railways and highways built at the end of the 19th century. and further reconstructed. These highways pass in close proximity to the Armenian (about 25 km) and - especially - South Ossetian borders (about 10 km in the Agara region), that is, they are completely controlled by the Russian armed forces".

That is, it turns out that the Turks and Azerbaijanis are also to blame for laying energy corridors that are vital for the Georgian economy, where the “Armenian brothers” and the Russian invaders under the influence of the Armenian lobby will be “tempted” to cut them off. Interesting logic. According to this logic, it is necessary to judge not robbers and murderers, but their victims, who “seduced” the criminals with their defenselessness, the availability of money and the ability to rob.

Further, Turkey's assistance to Georgia in the matter of security and defense is presented as "horror":

“In 2004, the Turks completed the reconstruction of the Marneuli military airport, which cost $ 3 million. Turkish financial assistance to the Georgian army was further developed. From 1998 to 2008, gratuitous military aid to Ankara amounted to $ 40-45 million. Cooperation was not limited to funding. Turkish specialists helped build a military base in Senaki that meets NATO standards. This base is located near the border with Abkhazia. Until 2008, 600 Georgian special forces were trained in Turkey under the Train and Equip program. The construction of the Baku-Tbilisi-Kars railway, which was put into operation, as well as the beginning of the operation of the Baku-Tbilisi-Erzurum gas pipeline belong to the same period".

Just let the Armenian and pro-Armenian propagandists explain how Turkey can simultaneously allegedly "occupy" the same Adjara and train and equip the Georgian army to resist the invaders! Hence a simple and logical conclusion - the Turks are not the occupiers of Georgia, and will not be under any circumstances. The occupants of Georgia are different. So are their instigators. And who they are - the Georgian patriots know very well.

By the way, against the background of Turkey's military assistance to Georgia by the Georgian army, it is the “Armenian brothers” that are most outraged. For example, the separatists in Samtskhe-Javkheti do not like the deployment of the Georgian military in Akhalkalaki.

Further in the article there is again the “experience” that Turkey allegedly wants to “annex Adjara”. At the same time, of course, the blatant facts that both Samtskhe-Javakheti and Adjara want to be joined by Armenian nationalists are completely ignored, who do not recognize either the territorial integrity of Georgia, or the internationally recognized borders established in the South Caucasus and publish maps of the “great Armenia ”, with the inclusion of Georgian lands there.

At the same time, the Eadaily edition contradicts itself. On the one hand, it strongly opposes the Treaty of Kars of 1921, which was allegedly concluded in the "interests of Turkey". On the other hand, for some reason he writes:

"Turkey de facto does not recognize the Treaty of Kars, since in the" National Vow "- an oath taken by the parliament on January 28, 1920, Mustafa Kemal Ataturk and his supporters declared the acceptable borders of Turkey, in which Batumi is designated as Turkish territory."

This is a blatant lie. Let us recall that the "National Vow" or "National Turkish Pact" (tur. Misak-ı Milli) was adopted on January 28, 1920 in Istanbul by the Chamber of Deputies, in which the majority were supporters of the Turkish liberation movement. The document stipulated the territorial issues of the structure of the Turkish state after World War I.

In accordance with the declaration, the territory inhabited by the Turkish nation was understood as the entire territory of the modern Turkish Republic. Regarding the districts of Batumi, as well as Kars and Ardahan, the possibility of holding a referendum on the state ownership of these territories was assumed. Those. In accordance with the “National Vow”, Batumi could become a “Turkish territory” only following the results of a referendum and if the population of Adjara wanted it - but nothing else!

However, the matter did not come to a referendum. Turkey voluntarily recognized the belonging of Batumi and Adjara to Georgia in accordance with the Treaty of Kars. As for Kars and Ardagan, both Soviet Russia and Georgia, and Turkey and even Armenia came to a consensus in 1921 that it makes no sense to hold a referendum here, since over 90% of the population of these regions were ethnic Turks and the result of the popular will would be obvious.

Let us recall that the Treaty of Kars was signed and ratified after the adoption of the "National Vow". And at the very beginning of the article it was especially emphasized that Turkey recognizes the territorial integrity of Georgia. So what discrepancies can there be? The Treaty of Kars is in effect, and all attempts of Armenian nationalists to revise it and "revive" the initially invalid (it was not even ratified) Sevres Treaty are doomed to failure.

It seems that the Armenian provocateurs no longer know how to inflame anti-Turkish and anti-Azerbaijani sentiments in Georgia. There are no facts that would indicate that Turkey is pursuing any other policy towards Georgia except friendship and good-neighborliness, and there cannot be. So we have to blatantly lie, presenting real assistance to Georgia to Turkey, participation in international transit projects and even unconditional recognition of Georgia’s territorial integrity as “Turkish intervention”.