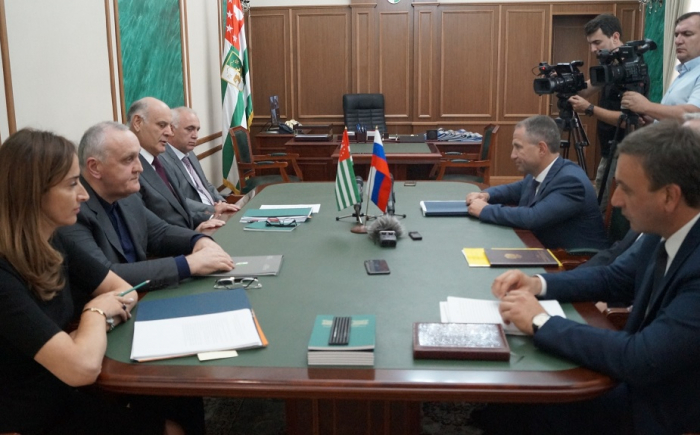 For those who understand the essence of the separatist regime in Sukhumi, there is no doubt that the trip of one of the leaders of the Alliance of the Patriot Irma Inashvili to separatist Abkhazia was fully coordinated with the separatist masters in Moscow and, most likely, in Yerevan. The fact that some of the Abkhaz, who have not yet disappeared from their heads with the nationalist anti-Georgian propaganda, began to resent this visit, does not change the essence of the matter. Moreover, when deciding the fate of Abkhazia and the Abkhazians themselves, they probably don't ask much. And this was shown by the recent visits of Kremlin officials to Sukhumi.

In particular, almost simultaneously with Irma Inashvili's trip to Sukhumi, one of the main curators of the separatists, Sergei Lavrov-Kalantarov's confidant, Deputy Minister of Economic Development of the Russian Federation Mikhail Babich, visited. Mikhail Babich actually delivered an ultimatum to the separatist puppets: by the end of the year, allow the sale of real estate in separatist Abkhazia to Russian citizens, and in fact to representatives of the Armenian community of Krasnodar Territory.

This is reported in more detail in the article: “Russia threatens Abkhazia, in case of diversification of external relations, “erase the borders" (https://accentnews.ge/ru/article/23758-rossiia-ugrozhaet-abkhazii-v-sluchae-diversifikatsii-v?fbclid=IwAR2eG4_OpnojNzOo3o-BEGJmi1Pb6l5Zka-jpXrUhjxi7-UpqOLXhLe-ISg):

“Behind closed doors for a long time, Mikhail Babich in a very harsh form reprimanded Aslan Bzhania his dissatisfaction with a number of key issues for Russia. “Many different topics were raised by Babich. He talked about energy or rather suggested that this issue be resolved quickly. It was about selling the entire system to the Russians. He was also indignant at the fact that the issue of selling real estate to Russians did not budge and demanded that this issue be resolved by the end of the year. In exchange for Russian citizenship and a good attitude,” said our source in the Presidential Administration of Abkhazia.

But this is not the most important thing either. According to our interlocutor, the Russian official threatened Abkhazia with all kinds of sanctions and toughening up, agreeing to the point that the post-war blockade would seem child's play if the Abkhaz leadership did not stop showing every interest in establishing any kind of relations with Georgia and other countries of the world. “What kind of trade relations have you decided to conduct with the Georgians without our knowledge! Do not forget who extended a helping hand to Abkhazia in difficult times, who is helping her now! ”- this is how our interlocutor describes Babich's dialogue.

Behind closed doors, the Deputy Minister of Economic Development of Russia suggested that the leadership of Abkhazia actually revise the existing borders of the state, disguising this as simplifying the crossing of the Russian-Abkhaz border. In fact, Mikhail Babich demanded to move the checkpoint deep into the republic, to the Gagra district, so that "the residents will gradually get used to the fact that the border will no longer exist, it will be erased."

The separatist puppets were given to understand that the entire territory of Abkhazia is the "complete property" of the curators of the separatist project, and they will dispose of there as they think. And here it is very interesting that a proposal was voiced to move the Russian border first to the Gagra region (and then, possibly, to the east).

So that none of the Sukhumi puppets have any doubts about the decisiveness of the Kremlin's intentions to "erase the border" and annex Abkhazia to Russia, immediately after Mikhail Babich's visit to the separatist territory, a very old "friend" of the separatists, who is "on the payroll" of the Armenian lobby Mikhail Zatulin, who was quoted by the Federal News Agency: "Deputy Zatulin allowed the possibility of South Ossetia joining the Russian Federation" (https://riafan.ru/1305779-deputat-zatulin-dopustil-vozmozhnost-vkhozhdeniya-yuzhnoi-osetii-v-sostav-rf?fbclid=IwAR2Om6j9_hf4tT1P1lSMBSBFQXv6FBFqYfImQmERtojwIfpEzWJMhN8luws):

There is also an option that in order to create the appearance of “taking into account the interests of all segments of the population of Abkhazia,” the Kremlin may also agree to a “compromise”: the division of the separatist territory. They say “if you want to go to Russia, stay in Gagra, Sukhumi, and Gudauta. If you want "independence" - please, the "hero city" of Tkvarcheli is empty. Sell ​​your housing to the "patriots of Russia" of Armenian nationality and move out to "independent" territory. Otherwise, "Russia is great" and you can be forcibly evicted away from Abkhazia.

Having annexed a large part of Abkhazia to the Russian Federation, the invaders can "as a compromise" leave under the control of the separatists an insignificant piece of territory that is not interesting from the point of view of the resort economy. And everything else will in fact join the Krasnodar Territory, making Abkhazia a continuation of the "Greater Sochi". Where, as you know, the Armenian lobby runs completely.

The question arises, what does the Alliance of Patriots and Irma Inashvili have to do with it? The fact is that the planned annexation of Abkhazia by the Kremlin will cause outrage not only among Abkhazians but also among Georgia and the Georgian people. And in order to make this indignation less, and at the same time to organize the transit of goods through Abkhazia to Armenia, the same "patriots" can be allowed a kind of "registration" of the Georgians of the Gali region, who can finally "generously" return separatist passports. Of course, the same "Alliance of Patriots" does not say a word about the return of Georgian refugees to other regions of Abkhazia, where Armenian nationalists have long looked after the lands for themselves.

Those. the visit of a representative of the puppet Alliance of Patriots to Abkhazia was also organized by the Kremlin for a reason. This is, so to speak, “probing” the issue of the annexation of Abkhazia by the Georgian society. Or, more precisely, the part of it that is duped by the pro-Kremlin "fifth column", which is represented by the "Alliance of Patriots".

It turns out that Abkhazians together with Georgians in occupied Abkhazia can be driven into a kind of ghetto. Georgians to the Gali region, Abkhazians to the beggar Tkvarcheli, where it is possible they will preserve the semblance of separatist "self-government" and even allow the remnants of the separatists to "tyrannize" Georgians in the Gali region. The rest of Abkhazia goes to the representatives of the “ancient long-suffering people”. And even the appearance of the Abkhazian separatist regime will no longer exist here.

If the invaders begin to "erase the border" and "move" the checkpoint deep into Abkhazia, then, in the end, it will end up near Ilori and Tkvarcheli, where the dying Abkhaz aborigines may be driven into the crumbling houses. This is at its best. At worst, a banal genocide of the Abkhaz is possible. Such is the sad prospect of the Abkhaz ethnos if there is no de-occupation of Abkhazia and the restoration of a friendship between the fraternal Abkhaz and Georgian peoples.