Amid screams of "Turkish danger", the Armenian lobby is preparing a new invasion of the occupiers and separatist riots 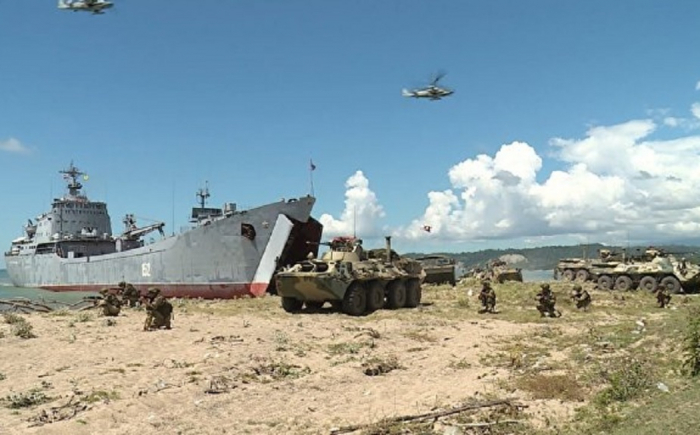 Against the background of the ostentatious "peacefulness" of the Sukhumi separatists who suddenly spoke sharply about the "dialogue with Georgia" (and why this "dialogue" is not even hidden - for the sake of the transit of goods through occupied Abkhazia for Armenia), strange things are happening on the separatist territory.

It is reported, in particular, that "Russian and Abkhaz military men conducted exercises on the Black Sea coast".

“More than 1,500 tankers, artillerymen and motorized riflemen of the Russian military base, together with the military of the Ministry of Defense of Abkhazia, have worked out their coastal defense skills.

The Russian and Abkhaz military repulsed an attack by a simulated enemy amphibious assault at the Nagualou training ground ...

During the training battles, the military also worked out the skills of creating fortifications on the coastline, camouflaging combat vehicles, as well as the operational destruction of surface assets of a simulated enemy. In addition, with the calculations of portable anti-aircraft missile systems, they repelled air strikes and overcame the territory conditionally contaminated with toxic substances, it follows from the press service.

In total, more than 1.5 thousand servicemen of the Southern Military District were involved in the exercises, about 500 units of military and special equipment were involved, ”the Ministry of Defense of the invaders said.

Ie. Against the background of the Sukhumi separatists' talk of "peace", the occupying military grouping of the RF troops in Abkhazia occupied by them is being built up and large-scale exercises are being conducted.

At the same time, in fact, Samtskhe-Javakheti is openly run by Armenian separatists who are gathering 3,000 supposedly “peaceful actions” of separatists. It comes to clashes between their separate groups with shooting and pogroms.

Those. we have a "classical scheme": those who are hostile towards Georgia under the talk about "peace" are preparing for large-scale aggression.

Another sign of such preparation is the distraction from real aggressors and enemies of the Georgian statehood by imaginary ones.

It is precisely such a "distraction" that is whipping up turkophobic hysteria, which was engaged not only by the fifth column in Georgia, working for the secret services of Yerevan and the Kremlin, the pro-Armenian Russian media and even the Tskhinvali separatists. An example of such propaganda is an article in the pro-Armenian edition of eadaily: “Fighting” with Russia, Tbilisi creates reasons for the invasion of the “Turkic tandem” (https://eadaily.com/ru/news/2020/08/21/voyuya-s-rossiey- tbilisi-sozdaet-povody-dlya-vtorzheniya-tyurkskogo-tandema)

Those. even from the name it is clear that certain forces are trying to divert Georgian public opinion from a new invasion of the still unoccupied territories of the invaders already stationed in Georgia.

Indeed: let those who are so “worried” about the alleged “danger of a Turkish invasion” in Georgia say how many square meters of internationally recognized Georgian territory did the Turkish military occupy? Not a single meter! But the Russian Federation occupies 20% of the territory of Georgia and tens, if not hundreds of square kilometers have already been occupied by Armenia, brazenly "moving" the border to the north, because of which, for example, the ancient Georgian monastery of Khujabi passed under Armenian control.

At the same time, the pro-Armenian propagandists are very "worried" that Georgia wanted to celebrate the holiday of Didgori battle and Turkey "does not allow to make it a public holiday and a day off."

What can you say to these false speculations?

Firstly, unlike the “ancient Armenians” with their completely invented mythologized “history”, the Georgian people have had many real outstanding victories in history. Thanks to these victories, Georgian statehood has survived through the centuries - i.e. The "fruits of victories" are obvious. To make the anniversary of each such victory a day off is not enough calendar.

Secondly, Turkey never imposes on its neighbors what holidays to celebrate. And the lie that there was pressure speculatively began to be replicated by eadaily.com in the material “Like at home: Ankara has banned a national holiday in Georgia” https://eadaily.com/ru/news/2020/08/18/kak- u-sebya-doma-ankara-zapretila-narodnyy-prazdnik-v-gruzii referring to the fact that “the former Turkish ambassador to Georgia” allegedly spoke against the official day off in Georgia on the day of the Didgori battle (the ambassador's name and surname is not specified!).

Let us remind those gentlemen who are so “worried” about the Georgian holidays - there were no statements from the current Turkish ambassador to Georgia regarding the celebration or “not celebrating” the anniversary of the Didgor battle. The former ambassador, whoever he is, is already expressing his private opinion (especially since this is some kind of "anonymous ambassador"). In addition, if something like that happened, the opinion of the former ambassador could simply have been “taken out of context” by his more lengthy reasoning.

And the celebration of this historic event this year has passed. It was simply not so representative due to quarantine restrictions. But the provocateurs immediately figured out which of the high-ranking officials was not at the celebration and presented it as allegedly "the consequences of pressure from Ankara."

Let us also remind the great connoisseurs of the mythical "ancient Armenian history" that both Turks and Georgians participated in the Battle of Didgor. On the side of David Agmashenebeli, the main striking force was the Kipchak Turks. On the side of the Seljuk emirs, Georgian feudal lords opposed to David Agmashenebeli fought. So, there was no trace of "Turkic-Georgian confrontation" there, but there was a struggle for power, for the unity of the Georgian state in the early feudal era.

There is also a good Russian proverb: the thief himself shouts the loudest "stop the thief". The loudest "fear the aggressor" shouts the aggressor himself. Here is how eadaily.com describes the "experience" of the Tskhinvali separatists for the alleged "Turkization" of Georgia:

South Ossetia is closely watching Turkey's growing influence in the region. Against this background, Tskhinvali advises Tbilisi to stop interfering in the internal political processes of independent states - Abkhazia and South Ossetia.

"The Turkishization of Georgia's remaining territory is inevitable, and it will take place not only from Ajaria, but also from the east," South Ossetian Foreign Minister Dmitry Medoev told EADaily.

Those. Tskhinvali separatists, who carried out genocide of the Georgian population of the region and wiped out the Georgian villages of the Liakhvi Gorge, suddenly sharply "zaprezhivayut" for Georgia, which is allegedly threatened by "Turkization".

Naturally, they began to “worry” at the suggestion of their Armenian “masters”.

You see, they are worried about the "Turkization" of Georgia. But the Armenianization of Abkhazia and the Russification of the Tskhinvali region (where the Russian military and service personnel of the occupation group from the Russian Federation will soon be more than the Ossetians living in the region) do not bother them?

Public opinion in Georgia is distracted by the mythical "Turkic" threat, while Armenian separatists in Samtskhe-Javakheti are clearly preparing a rebellion and gathering militants, and in occupied Abkhazia, a grouping of Russian invasion forces is growing, under the lulling stories of Sukhumi separatists about "peaceful dialogue".