Georgia is being “harassed” to open Abkhaz transit for Armenia 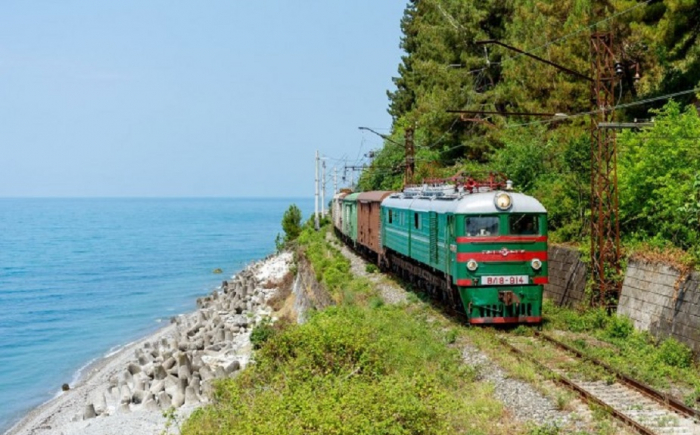 For those who have forgotten how the war in Abkhazia began. On the eve of August 14, 1992, nowhere in any of the Russian media was there any information about the "Abkhaz love of freedom". On the contrary, they wrote and talked about the "Zviadists who rob railroad trains." And the main problem was precisely the uninterrupted rail transit of weapons and military equipment from Russia to Armenia.

That is why the Armenian side and the Armenian lobby so insisted that Eduard Shevardnadze (who the day before took a course towards normalizing relations with Russia and agreed to his country's membership in the CIS) send troops and take control of the Abkhaz section of the railway. At that time, let us remind, there were fierce battles in the Azerbaijani Karabakh, and the Azerbaijani army began to press the Armenian aggressors.

When Georgian troops entered Abkhazia, the former "friends-allies" sharply changed their rhetoric. It turned out that Georgia is an "aggressor" and Abkhazia "is fighting for freedom. The war began, which ended with the expulsion of more than 300 thousand Georgians from Abkhazia (both Zviadists and non-Zviadists).

And the “brothers Armenians”, who so begged Georgia to provide them with railway transit, took advantage of the “chic moment” to create “another Armenia” on the shores of the Black Sea. They not only, using the capabilities of their lobby, armed the separatists and forced the Russian army to fight on their side, but they themselves participated in the genocide and expulsion of the Georgian population from Abkhazia. As a result, in fact, today the Armenians are the largest ethnic community in occupied Abkhazia and control its economy.

The situation is repeating itself in some way, but in conditions when Georgia has in fact lost Abkhazia and Georgian refugees cannot return to their homes for almost 27 years. True, Georgia still has lands for which the “brothers-Armenians”, the same Samtskhe-Javakheti, claim. But the fact remains that the recent Armenian aggression against Azerbaijan in the Tovuz region revealed a "weak point" - the absence of a direct border between Armenia and its "CSTO ally" Russia and the impossibility of establishing direct arms supplies. As a result, the aggressors "got in the teeth" and the development of a military adventure did not follow.

But on the other hand, they became more active:

1. Armenian separatists in Georgian Samtskhe-Javakheti
2. Attempts to organize transit through the occupied territories of Abkhazia and the Tskhinvali region. Without their de-occupation and the return of refugees.

It all started with a dramatic change in the rhetoric of separatist puppets in Sukhumi. Suddenly, there was no trace of the former anti-Georgian hysteria. And the secretary of the so-called NSS of Abkhazia, Sergei Shamba, not only stated that he considered it necessary to have a dialogue with the Georgian side to resolve the conflict but even agreed (an unheard-of thing!) To return human rights to the now absolutely powerless Georgians of the Gali region, along with separatist passports. True, he did not even mention the return of another part of the Georgian refugees. And among the issues that can be discussed with Georgia, Shamba especially noted the transit of goods through Abkhazia. In other words, everything is clear, the separatists have "gotten kinder" exclusively by fulfilling the tasks of their Armenian "masters" and in their interests.

Furthermore. Daur Kove, the head of the so-called separatist Foreign Ministry, called on his separatist authorities to prepare for Russia to negotiate with Georgia. This means in the Armenian interests of course, although this is not directly stated. Here's a video:

The separatists even forget about the "recognition" of their "independence". They urgently need to fulfill the order of the "owners". And it's not hard to guess what - the order for the transit of goods, including the military for Armenia.

"At the same time, Russia invariably stands for mutually beneficial and friendly relations with Georgia. We are convinced that this is precisely the national interests of the two countries and peoples ... We fully support the course, initiated in 2012 by the government of the Georgian Dream - Democratic Georgia alliance, towards normalizing bilateral relations. Our directive is that the more normalization, the better, "Lavrov said, also advocating the soonest resumption of air communication with Georgia.

"I would like to hope that the resumption of flights is a matter of the near future. We are closely monitoring the state of affairs in Georgia itself, of course, we are waiting for the general normalization of the sanitary and epidemiological situation in the region and in the world, the opening of regular flights to other destinations," Lavrov said.

And not a word that Georgia should "recognize the realities" and "independence" of the separatists.

A very cunning flirtation of the Armenian lobby with Georgia began, in which the pro-Armenian "fifth column" in Tbilisi immediately joined.
A companion of the faithful "servant" of Yerevan - leader of the Alliance of Patriots David Tarkhan-Mouoavi Irma Inashvili has already gone to separatist Abkhazia "to conduct a direct dialogue" (probably, first of all, about the Armenian transit, of course).

The Armenian lobby is trying to drag Georgia into an adventure again by deception. Moreover, the Armenian nationalists, naturally, are not going to concede Abkhazia, which they "liked". But they will obviously try to "chop off" new lands at a convenient opportunity if the transit of weapons and Russian troops through Georgia is opened. Moreover, the separatists in Samtskhe-Javakheti are already on full alert.

If in 1992 Georgia lost Abkhazia by agreeing to the “requests” of the Armenian lobby to “ensure rail transit”, now, having agreed to transit without de-occupation of territories and return of refugees, it may lose its statehood altogether.