The Armenian Diaspora in the USA includes the Georgian Samtskhe-Javkheti in the "Wilsons' Armenia"! 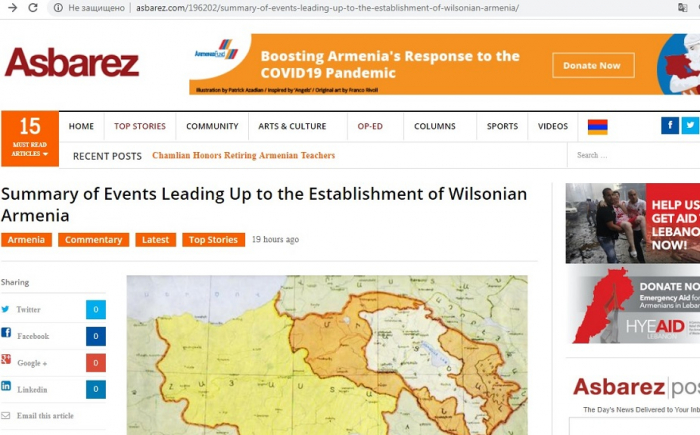 The arrogant claims of Armenian nationalists to Georgian lands continue to be replicated in the media, not only in the Republic of Armenia, but also in the diaspora. Including in the most influential Armenian diaspora in the United States. In particular, the website of the Los Angeles-based Armenian newspaper Asbarez (asbarez.com/) published the material “A summary of the events that preceded the creation of Wilsonian Armenia” (http://asbarez.com/196202/summary-of-events- leading-up-to-the-establishment-of-wilsonian-armenia /), illustrated by the map of the so-called "Wilsonian Armenia", with the inclusion of the Georgian region of Samtskhe Javakheti and part of Kvemo-Kartli, up to the border with Azerbaijan Red bridge.

Recall that the so-called. "Wilsonian Armenia" is named after the US President Woodrow Wilson, who patronized the Armenian nationalists. It was supposed to be created after the conclusion of the enslaving Treaty of Sevres by the puppet sultan's government. However, the patriots of Turkey, led by Mustafa Kemal (Kemal Ataturk), repulsed the Armenian and Greek aggressors who began to seize Turkish lands and as a result, the Treaty of Sevres was canceled.

But today both in Yerevan and in the Armenian diaspora they want to return to the Treaty of Sevres and begin revising the borders in the South Caucasus. And they began to propagate this redrawing of borders.

The publication of maps with the inclusion of Georgian Samtskhe-Javakheti in "Wilsonian Armenia" is definitely dangerous for Georgia. Especially if we take into account the sharp rise in separatist and nationalist sentiments among the Armenians living in the region and their "demonstration of strength and capabilities" in the form of an alleged gathering of more than 3 thousand militants for a "peaceful rally" in Akhalkalaki on July 21, 2020.

We present, translated into Russian, excerpts from an article published on the website illustrated by a provocative map with Armenian territorial claims in Georgia:

“World War I ended on the eastern front when the Ottoman government asked for an armistice on October 29, 1918. The next day, an armistice in Mudros was signed between the Ottoman Empire and Great Britain on behalf of the Allied Powers ...

Article 11 - Immediate withdrawal of Turkish troops from Northwest Persia beyond the pre-war border ...

Article 24 - In the event of unrest in the six Armenian vilayets, the Allies reserve the right to occupy any part of them.

On January 19, 1919, an international meeting began in Versailles (France) with the aim of ending all wars and spreading peace throughout the world. The meeting was attended by 32 states and nations. On February 12, 1919, two Armenian delegations arrived in Versailles. The delegation representing Mountainous Armenia was headed by Avedis Aharonyan, and Bogos Nubar Pasha represented the Western Armenians. The couple presented their demands to Western Armenia to include the territory from the Mediterranean to the Black Sea, Javakhk, Artsakh and Nakhchivan. Hearing the demands of Armenia, the head of the British delegation Mr. Lloyd George told the Armenian delegation that there are not enough Armenians to fill the required land. "

Thus, after the end of the First World War, Armenian nationalists demanded to betray Georgian Samtskhe-Javkheti to them. And apparently - the allies did not mind this.

The fact that today in the United States, in the American media, provocative maps are published with the inclusion of the primordial Georgian Samtskhe-Javkheti and part of Kvemo-Kartli into the "Wilsonian Armenia" is a very alarming signal. Moreover, as you know, the Armenian lobby in the United States with might and main supports Joe Biden for the presidency of the United States and, naturally, if he is elected, will demand to satisfy his "requests".

On the website of the newspaper "Asbarez" it is also said about what this edition has been doing and is doing.

“For many years,“ Asbarez ”covered the tragedy of the“ Armenian genocide ”, the triumph of the first independent republic, the growing pains of the community, the catastrophic earthquake, the fall of the Soviet Union, the liberation struggle of Artsakh (Nagorno-Karabakh), which gave way to the independent Republic of Artsakh and the ever-changing reality of the people Javakhk in the south of Georgia. "

Those. in the person of Asbarez, we are dealing with the mouthpiece of the Armenian “Javakhk” separatists in the United States. And then? that now this mouthpiece is publishing maps where Samtskhe-Javkheti has been torn away in favor of “great Armenia” - moreover, after the visit of the “Trump” US ambassador to Georgia to the region - is very symbolic and does not bode well.