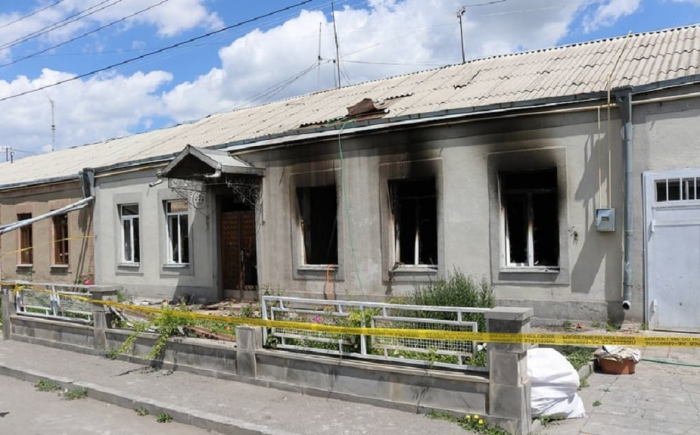 In the evening of August 8, on the "significant" day for Georgia, the 12th anniversary of the Russian aggression, riots broke out in the predominantly Armenian town of Akhalkalaki, Samtskhe-Javkheti region. According to the official version, they were caused by a conflict between two groups of Armenian youth.

The jam-news.net publication reports that on August 8 in the morning in Akhalkalaki there were at least two noisy clashes, in which the police did not consider it necessary to intervene. At the same time, in the middle of the day in the city center there was a massive fight with truncheons and shooting between two groups of young people.

On the one hand, residents of the village of Kulikam (Gulikami - in Georgian), including the later killed Vard Miranyan, took part in the fight. On the other hand, the residents of Akhalkalaki: the owner of the ArtSeg hotel Artur Gabrielyan and his friends. Jam-news.net reports that “The cause of the conflict is not completely clear. According to one of the versions, this was revenge for an incident three years ago between a resident of the village of Kulikam and the administration of the ArtSeg hotel.

And in the evening at about 19:00 in the center of Akhalkalaki, 27-year-old Vard Miranyan, a resident of the village of Kulikam, was killed, and they shot at him right on the street. Miranyan, wounded in the heart, was taken to the hospital in a private car. The killer turned out to be 37-year-old Artur Gabrielyan. Interestingly, the shooting continued even in the courtyard of the hospital. Gabrielyan and his friends fired at the car that was carrying the wounded, and the car overturned right at the gate of the hospital. The police first appeared only in the courtyard of the hospital and only then tried to intervene in the events.

The Ministry of Internal Affairs of Georgia issued a statement on the arrest of Artur Gabrielyan on charges of premeditated murder, illegal acquisition, possession and use of firearms.

Many consider the recent events in Akhalkalaki to be banal criminal showdowns. However, when dozens of young people are actually involved in such showdowns, who appear in one place as ordered, a doubt arises: is this a simple crime?

In particular, Teona Akubardia from the Georgian Center for Strategic Analysis GSAC considers the incident in Akhalkalaki to be a challenge to national security.

“What happened in Akhalkalaki is not just an ordinary case of violence, it is, just like many other things that are happening in the country today, a real challenge to our national security. Added to all this is the problem of the final loss of public confidence in the law enforcement and judicial system. And as a result, we have destroyed state institutions and the weakening of the country ”- said Theona Akubardia.

At the same time, if we take into account the events before the pogroms in Akhalkalaki, then what happened is more reminiscent of problems with discipline, the already mobilized and brought state of heightened combat readiness of the separatist "army", which for one reason or another is not yet participating in hostilities.

Let us remind you that the Armenian "Javakh" separatists de facto mobilized the army in the region. "Kavkaz plus" has already written about this in the material "Armenian nationalists in Georgia mobilize separatist detachments of many thousands and threaten with terror amid aggression in Tovuz" (http://en.kavkazplus.com/news.php?id=5369#.XzTnoh6EaNw). Moreover, the US Embassy in Georgia was forced to respond to this mobilization - more about this in the material "The visit of the Ambassador to the United States in Samtskhe-Javakheti on the eve of the anniversary of the 2008 aggression is a "signal" to Yerevan, Moscow and the separatists that destabilization will not pass" (http://en.kavkazplus.com/news.php?id=5562#.XzTn8h6EaNw). It is known from history that if an army "mobilized" and put on alert for a long time is in such a "cocked" state, then at a certain moment "breakdowns" begin. Discipline will fall, fights and showdowns begin. The army must either fight or be demobilized for the most part.

Then the separatists were able to gather more than 3000 people in Akhalkalaki, as for the selection of young people with a sports physique.
A full-fledged separatist group is deployed in the Semtskhe-Javkheti region. In addition, the separatists are unhappy with the fact that there is a Georgian army in the region, which Kavkaz Plus also wrote about in the material "Residents of Akhalkalaki, citizens of Georgia, must understand that the guarantor of their peace and tranquility is the Georgian Army" (http://en.kavkazplus.com/news.php?id=5437#.XzTozR6EaNw).

What really happened on August 8? It turns out that groups of extremists continue to be in a state of readiness and are concentrated around Akhalkalaki. And because of this, an internal conflict occurred between them. How else to explain the presence of several dozen armed people from the small village of Kulikam (Gulikami) in Akhalkalaki, which is infected with separatism of more than many.

A few months later, a monument to another separatist militant Mikhail Avagyan was erected in another village, which had a public outcry. Read more about this in the article "Armenians on the Georgian land in Samtskhe-Javakheti established a monument to the separatist executioner" (http://en.kavkazplus.com/news.php?id=17#.XzTpVx6EaNw).

As it turned out, separatist militant Mikhail Avagyan managed to "check in" not only in Azerbaijani Karabakh, but also in Abkhazia, where during the 1992-1993 war there was a genocide of the Georgian population.

Thus, we are dealing with an actual showdown between separatist formations in Samtskhe-Javakheti. They were put on high alert on July 21 and the events in Akhalkalaki on August 8 showed that a separatist rebellion could break out at any moment and the 3,000 militants of this group are comparable in size to half the size of the army of such a NATO member state as Estonia (in total, the Estonian army has 6 thousand. people.) And now this group is carrying out its military training and military reviews on Georgian territory with impunity. Moreover, the "concentration of militants" is so high that it even comes to conflicts between their separate units.

The worst thing is that the separatists, even after the arrival, are unhappy with the presence of the Georgian police in the region. The same edition of jam-news.net quotes the words of deputy Samvel Manukyan: “They called me from the village of Diliski and asked - what is it that the special forces are doing here in the village? Of course, I don't like it when the car is stopped and checked. People start to resent and say that in a democratic state the police should not check every passerby. "

The same Samvel Manukyan stated that there is no problem of illegal weapons in the region (lies).

It is no secret that strategically important communications pass through the region, primarily the Southern Energy Corridor, which the Armenian aggressors in the Tavuz region of Azerbaijan wanted to cut - they did not succeed. And the next blow can be delivered at any moment in the Samtskhe-Javakheti region.