Khachapuri as an "ancient Armenian product 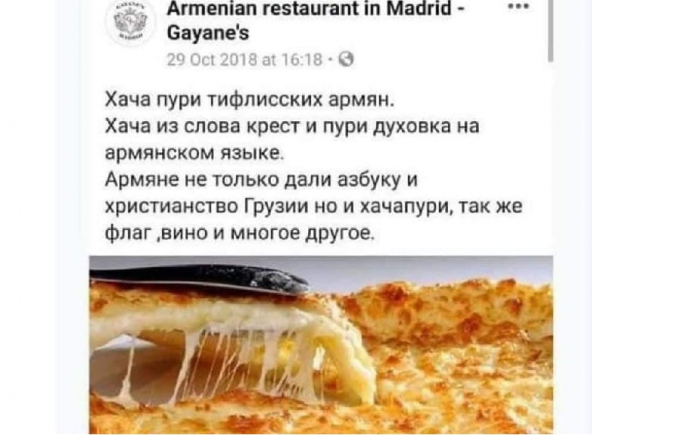 The fact that Armenian falsifiers appropriate all the achievements of the intangible culture of neighboring peoples, from music to cooking, is no secret to anyone. Recently, however, attempts to appropriate the Georgian heritage have become especially intense and arrogant. Here, for example, is one of these pearls, which explains the alleged Armenian origin of such a well-known Georgian product as khachapuri.

The very name "khachapuri" is translated very simply. "Khacho" means cottage cheese in Georgian, "puri" means bread. Everything is simple and does not need additional fabrications.

But the Armenian falsifiers, even so obvious, simply shouting about their true origin, Georgian products are trying to appropriate. And so a "study" appeared on social networks on the page of an Armenian restaurant in Madrid:

"Khacha puri of Tiflis armenians Khacha from the word "cross" and puri "oven" in Armenian The Armenians not only gave the alphabet and Christianity to Georgia, but also khachapuri, as well as a flag, wine and much more".

Let's try to figure out why the Armenian falsifiers have been trying so intensively to appropriate everything Georgian lately.

Let's start with the fact that, in general, the Europeans for a long time learned a lot about the peoples of the Near and Middle East precisely in the Armenian nationalist interpretation. It was easier for the Armenians from the beginning - they had significant diasporas in Western countries, and at the same time they were historically a trade and intermediary layer of Muslim states.

Therefore, the Armenian nationalists specially supported the image that “the only cultured civilized people in the East are“ great and ancient Armenians ”. In the light of Islamophobic prejudices in Europe, this was easy for them at one time. It is enough to exploit the racist thesis that "all Muslims are barbarians", especially in relation to the Turkic peoples, and impudently pass off all the achievements of these peoples as "ancient Armenian", simply stealing them. Thus, lavash, dolma, and the dance of "kochari" became "Armenian". Then this theft spread to Orthodox Georgia. They liked 442 Orthodox churches, fortresses, the city of Tbilisi ... churchkhela, saperavi and much more. The list is quite impressive.

However, recently, those of Europeans and Americans who are interested in the same region of the South Caucasus, the Near and Middle East are discovering the original culture, history and intangible heritage of the Turks, Azerbaijanis and other peoples. And primitive Islamophobia is not enough to say that “they took all this from the ancient Armenians”. As a result, the intangible cultural heritage of these peoples, stolen by the Armenian falsifiers, "before our very eyes" floats away from the Armenian "treasury" filled with theft.

In addition, Europeans sometimes discover with surprise that it turns out that the Christian people in the region are not only Armenians. Georgians are a Christian people with a distinctive history and, most importantly, the continuous existence of statehood on their land.

Moreover, Georgians do not need to look for foreign lands in order to declare their “ancient ancestral home” there and do not need myths about “genocide”. Georgians have been living on their own land from time immemorial; here are also their churches and monasteries of the fortress. The history of the Georgians was not invented by falsifiers, but confirmed by chronicles and historical sources. And not only Georgian and European, but also sources of Muslim states.

Therefore, discovering Georgia, its unique cultural heritage, Europeans simply begin to understand that what they are told about “great and ancient” Armenia is, at best, only embellished fairy tales. The fact that the Armenians have “Christianity” is only a pale shadow of the richest Georgian heritage. This is despite the fact that the Europeans do not yet know about the complete "absorption" and appropriation of the Albanian Christian culture and Albanian churches by the Armenian nationalists. But sooner or later they will find out. And then what will be left of the "ancient Armenian culture"? Nothing at all!
So it turns out that if you look at it, the “ancient Armenian heritage” is fairy tales, inventions, falsifications and appropriation of someone else's. This is especially evident against the background of the Georgian heritage.

That is why the Armenian nationalists are looking for such Georgian things to be passed off as “Armenian”. Including in the culinary field. Such Georgian products as sulguni, Georgian wines and many other culinary products are already being issued for Armenian.

Cooking is what, in principle, first of all, tourists coming to the South Caucasus encounter. It is important for Armenian falsifiers to “stake out the rights” to someone else's intangible heritage with their tales. And then, given the power and influence of the Armenian diaspora, they will clearly try to patent and appropriate the Georgian in international instances.