Initial investigations point to negligence as cause of Beirut blast 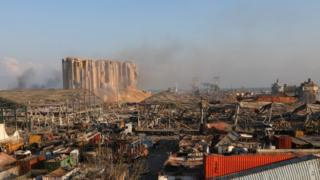 Initial investigations into the Beirut port blast indicate years of inaction and negligence over the storage of highly explosive material caused the explosion that killed more than 100 people, an official source familiar with the findings said, as reported by Reuters.

The prime minister and presidency have said that 2,750 tonnes of ammonium nitrate, used in fertilizers and bombs, had been stored for six years at the port without safety measures.

“It is negligence,” the official source told Reuters, adding that the issue on storing the material safely had come before several committees and judges and “nothing was done” to order the material be removed or disposed.

Tuesday’s explosion was the most powerful ever suffered by Beirut, a city still scarred by civil war three decades ago and reeling from a deep financial crisis rooted in decades of corruption and economic mismanagement.