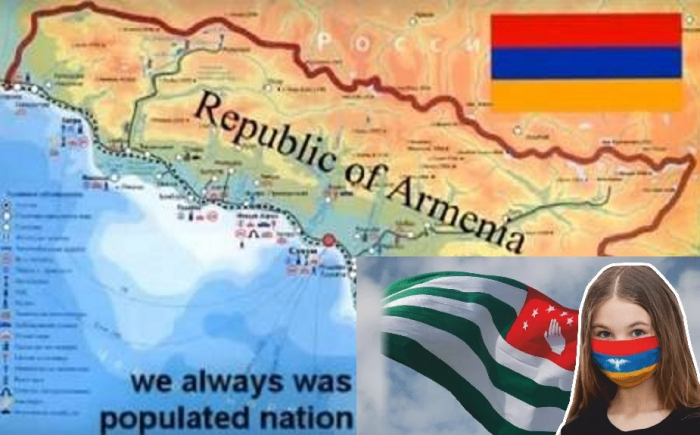 It just so happened that the Armenian nationalists, if you listen to them, are really the most “long-suffering people in the world”. No matter how well they are treated, no matter what privileges they create, they still think that they are “infringed”, “oppressed”, and “answer with ingratitude for the good that the Armenians have done”.

And now, in the media and social networks, they are gradually beginning to propagate the idea that, they say, in Abkhazia, where the Armenians have in fact become the majority, they "do not have enough rights." It is to this “problem of Armenians” that the recently posted on Yandex Zen article “Armenians in Abkhazia. Life on "bird rights" (https://zen.yandex.ru/media/vzorsgor/armiane-v-abhazii-jizn-na-ptichih-pravah-5f105eb91015531af6e499e4)

“In Abkhazia, interethnic issues are growing again. These people seem to like to create ethnic conflicts. All Georgians were kicked out, so who's the bad guy now?

The titular population directed their righteous discontent towards the Armenians. The Armenian population is growing and even predominates in the Gagra, Sukhum, and Gulripsh regions. In general, they have been on the Abkhaz land since Byzantine times, but only in the 20th century began to move there en masse. The Armenians have mastered uninhabited lands and entered society. There have never been conflicts.

When the Abkhaz-Georgian war broke out, the Armenians declared neutrality, but later entered the war on the side of the Abkhaz. And largely thanks to their courage, Abkhazia became independent. But now in the "Land of the Soul" they are silent and in every way are trying to belittle their participation in the war and contribution to victory.

“The natives of Armenia who fought in the“ Battalion of Baghramyan ”even warmed their hands very much. - Those who stayed here have excellent houses and those who left did not leave empty-handed. They died not for the independence of Abkhazia, but for their cause ... They, on their own initiative, joined this war, and I know that they dealt with the Abkhaz military and the civilian population with the same cruelty as with the Georgians "- veteran and a disabled war veteran, Jemal Bartsits.

Since the end of the war, Abkhazia has been pushing the line of a mono-national state. "Country of the Soul" is the territory of the Abkhaz. This has already been reported to the Russians, who have tried unsuccessfully to build a business here. And they are only waiting for the repatriates who settled in Turkey.

But the Armenians were superfluous. They are not given the opportunity to get into power at any level. Their number is artificially underestimated. The Armenian language is not officially recognized. They try to push aside and forget culture. They try to explain the success of the Armenians by some criminal motives:

“We only have a service staff function. The Armenians say that they are the oldest inhabitants who helped in ousting the Georgians, and now we are in their debt. Abkhazia has become a source of business income for them, where they can buy and sell everything, even drugs. Many poor Armenians have become millionaires in Abkhazia and from here contribute a large sum to the state budget of Armenia. Their number in our country is growing daily, but the Armenian authorities avoid political support for Abkhazia so as not to tease Georgia. If the Armenian authorities do not recognize the independence of Abkhazia, the Armenians will have to leave these places”.

Well, it looks like it gets worse. The Abkhaz understand very well that there are 2 ways. Either go to a meeting and expand the powers of the Armenian population or realizing that the Abkhaz population is losing in numbers and will soon cease to be dominant, continue the current policy and create conditions for the eviction of Armenians to Russia or Armenia".

End of the article.

From the very beginning, the authors of the material are trying to accuse Abkhazians of the genocide of the Georgian population. True, they are forced, demonstrating the alleged "anti-Armenian sentiments of the Abkhaz," to insert a quote from Jemal Bartsits, who recalled the looting and other "deeds" of Armenian militants from the Battalion named after. Baghramyan and other formations distinguished by the greatest cruelty. It was the Armenian nationalists (and not in any way related and moving with the Georgians Abkhazians) who were the main initiators of the ethnic cleansing of the Georgian population (it is no coincidence that Armenia from year to year voted at the UN General Assembly against the return of Georgian refugees).

At the same time, the Armenian nationalists naturally take credit for the "independence" of Abkhazia and believe that Abkhazians are "infringing" on them here and do not allow them to penetrate all the authorities.

What rights do Armenian nationalists still need in Abkhazia? Economically, we recall, for a long time and completely dominant in the separatist territory. Apparently, to be the only owners and owners of the land! Abkhazians hinder them in Abkhazia by the very fact of their existence.

At the end of the article, there is a hidden threat of Armenian nationalists to the Abkhaz: “Either go to a meeting and expand the powers of the Armenian population or realizing that the Abkhaz population is losing in numbers and will soon cease to be dominant, continue the current policy and create conditions for the eviction of Armenians to Russia or Armenia".

In fact, of course, the invaders from the Russian Federation, where the Armenian lobby is in power today (suffice it to recall Prime Minister Mishustin and Russian Foreign Minister Lavrov-Kalantarov) will never allow Abkhazians to evict a single Armenian. Rather, the Abkhaz will be evicted "somewhere far away." Moreover, Russia already has the experience of "cleaning" the Black Sea coast of indigenous peoples and settling it by Armenians, and the possible annexation of Abkhazia will only accelerate this process.

Those. The last sentence of the article must be understood unambiguously - if Abkhazia retains its separatist status (or even more so if it is annexed by Russia), Abkhazians are doomed in any way. The Armenians will force them either to cede power, and then the land "for good", or they will absolutely dominate demographically. And one fine moment, under the pretext of "the threat of genocide of the long-suffering people" with the help of the occupying Russian army, they will deal with the Abkhaz. Obviously, the next muhajir, which the Abkhaz people endured in the 19th century, will endure once again - already in the 21st century.