Separatists and their "messages" to Tbilisi. Who is behind it and what is happening in Abkhazia? 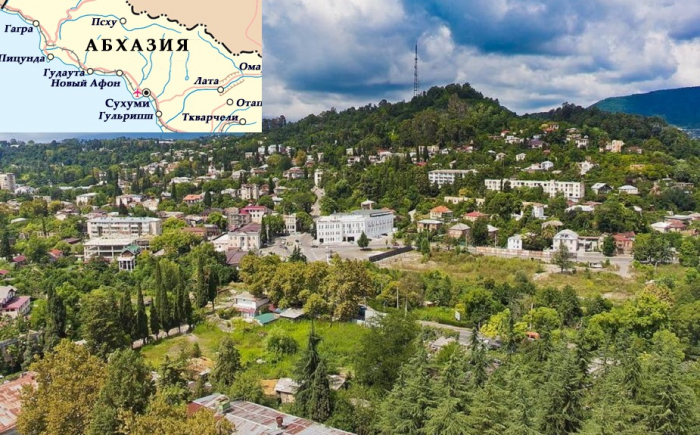 An article by Jimsher Rekhviashvili "Unexpected messages for Tbilisi - what is happening in Abkhazia?" published on the website "Radio Liberty" (https://www.radiotavisupleba.ge/a/30755648.html?fbclid=IwAR1cCYjq5WD6Ys_D9LWnBzoeRoSNeMWZo54wHRP58y7e7b SukhToHs1). In particular, the article says that the new separate leader Aslan Bzhania, his so-called. members of the "government" have visited Moscow several times over the past four months, but these visits have yielded no tangible results.

Moscow finances the budget of the separatist "republic" incompletely and with a long delay. According to the Abkhazia-Inform news agency, the Russian subsidy this year was supposed to amount to 4.746 billion rubles, but Moscow transferred only 1.703 billion rubles to Sukhumi, or 15% of the promised amount, which caused serious social and economic problems in the separatist territory... This is despite the fact that the economy of separatist Abkhazia is in complete collapse due to the disruption of the tourist season due to the coronavirus epidemic.

But at the same time, political pressure from the Kremlin on the separatists is increasing. The strengthening of this pressure is also indicated by the appointment of Russian official Sergei Pustovalov to the post of deputy prime minister of the separatist Sukhumi "government" on July 22, 2020. In fact, he will become the “governor” of separatist Abkhazia, which Kavkazplus has already written about in the article Russia has started annexation of Abkhazia - there wasappointed "viceroy" Sergei Pustovalov
(http://kavkazplus.com/news.php?id=29693#. XyMY8FUzbIU).

What is left for the separatists to do? They begin to rush about, frantically trying to find support somewhere and somehow survive. Since complete loyalty to the Kremlin is no longer paid, the puppet authorities of Abkhazia are trying to find other sources of existence and other "sponsors". Perhaps, this is connected with their last steps, which would have been unthinkable to assume a year ago.

In particular, the puppet separatist President Aslan Bzhania began to flirt even with the absolutely powerless Gali Georgians, who were deprived of all rights by his predecessor Raul Khadzhimba. Aslan Bzhania was in the Gali region, met with ethnic Georgians living there, promising to improve their legal situation.

Bzhania also speaks of the need to sort out relations with Tbilisi and restore trade and economic ties. On July 29, it became known that Sergei Shamba was appointed secretary of the so-called "Security Council" of separatist Abkhazia by order of Bzhania, who is also considered a supporter of dialogue and normalization of relations with Tbilisi.

The message is clear: the separatists are trying to show Tbilisi that they have a certain independence from the Kremlin and are ready to take certain steps towards the Georgian population. But it is clear that no concessions to the separatists are possible without restoring the territorial integrity of Georgia and the return of refugees.

It seems that Aslan Bzhania wants to get direct support from the powerful Armenian lobby, including in the West. It is no coincidence that Bzhania did his best to organize the recent mass gathering of Abkhaz Armenians in Gagra, where anti-Azerbaijani, anti-Georgian, and anti-Turkish appeals were adopted.

What is Tbilisi to do in such an atmosphere? Should he respond to the separatists' "messages"? It is necessary, first of all, to analyze who is really behind these messages.

There is a great danger that the Armenian nationalists who hate Georgia are really behind the "conciliatory" rhetoric of the separatists.

The messages from the separatists are intended to lull the vigilance of the Georgian authorities, to force them to give up their national interests.
With whom, then, will Georgia "conduct a dialogue"? With the "subjects of the Russian Federation", putting yourself on their level?

Signs that separatist projects will eliminate the mass. New realities associated with the coronavirus epidemic and a sharp drop in energy prices have significantly complicated the economic situation of the Russian Federation and made separatist projects problematic. Recall, in fact, these projects were forced to organize and support, contrary to the interests of Russia, the powerful Armenian lobby.

It is no coincidence that the Kremlin threw the idea of ​​joining all separatist non-states existing on "Russian bayonets" to Russia through the separatist PR specialist Zakhar Prilepin.

Therefore, Russia, firstly, sharply reduces funding for the separatists, secondly, it is trying to put direct supervisors (such as Sergei Pustovalov) in power for separatist formations, and thirdly, it clearly intends to solve something with the separatists in the near future. Either annex it or "push" into the respective states, receiving certain preferences from them.

The latter concerns, first of all, separatism in the Ukrainian Donbas, which turned into a long-term war for Russia, to continue which there are no longer resources and political sense. Moreover, even after “moving the front line” on Ukrainian territory by 100-150 kilometers, the Russian Federation does not receive geopolitical preferences (but receives devastated territories with a poor population). Therefore, here it is quite possible to "close" the separatist projects of the DPR and LPR "independence", which the Russian Federation has not recognized.

The South Caucasus is another matter. Here, the same 150 kilometers are quite enough to "break through the military corridor" from the occupied Tskhinvali region to Armenia. Therefore, Abkhazia and the Tskhinvali region will not be “pushed back into Georgia” by the Kremlin, by definition, especially when the Armenian diaspora “looked after” Abkhazia for itself.

On the contrary, the scenario with the annexation of this Georgian territory is most likely very likely. Moreover, the resort Abkhazia, located near the sea, in the event of its annexation to Russia, can, by analogy with "Crimea ours", raise the Kremlin's significantly dropped rating, which, as the events in Khabarovsk show, the people in Russia are not happy with.

It is clear that the recent aggravation of the situation on the Armenian-Azerbaijani border has shown the ambiguity of the situation in which Russia finds itself. In fact, it is being drawn into a war on the side of this regime by the hostile pro-American Yerevan regime.

But on any given day, the separatists are numbered. Hence their "messages". Messages of "despair", which, in principle, can be dictated by those who have long planned the separatists as a sacrifice to their geopolitical ambitions.