Residents of Akhalkalaki, citizens of Georgia, must understand that the guarantor of their peace and tranquility is the Georgian Army 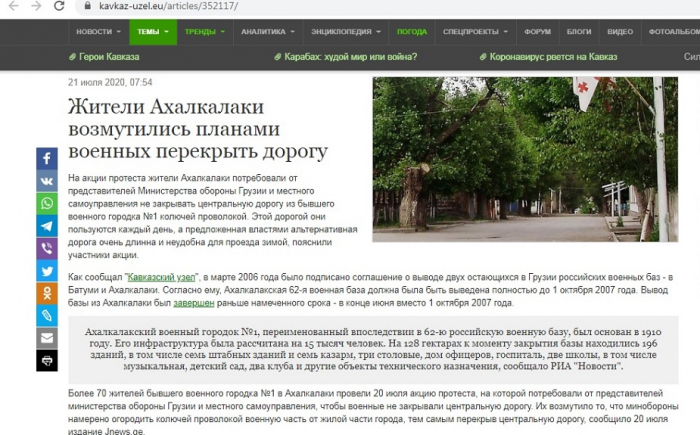 In the midst of the aggravation of the situation on the Armenian-Azerbaijani border, not everything was calm in Georgia, especially in the regions of Javakheti. For example, on July 20, more than 70 residents of the former military town #1 in Akhalkalaki (inhabited by former servicemen of the Russian army) unexpectedly held a protest rally, at which they demanded from representatives of the Georgian Ministry of Defense that the military "do not close the central road" along which they used to walk. According to them: “They use this road every day, and the alternative road proposed by the authorities is very long and inconvenient for driving in winter,” the protesters explained.

But, of course, all this was just a pretext. The main thing was generally to show dissatisfaction with the fact that the Georgian army was stationed in the Georgian region of Samtskhe-Javakheti.

Former employees of the Russian base in Akhalkalaki, de facto living on the territory that, after the withdrawal of the Russian military, became a Georgian military unit, outraged that the Georgian Ministry of Defense intends to fence the military unit from the residential part of the city with barbed wire, thereby blocking the central road, the newspaper reported on July 20 Jnews.ge.

Most of the protesters, if you carefully examine their biographies, are former full-time employees of the Russian military base. That is, in fact, these are agents of the GRU of the General Staff of the Armed Forces of the Russian Federation, which they left in Georgia after the withdrawal of the base in 2007. the paths of movement of military equipment, come close to secret objects. Therefore, the decision of the Ministry of Defense of Georgia on additional security measures and on fencing off the military facility from the "curious" was natural!

But this did not suit the Russian-Armenian agents. And it became more active just at the moment when plans were being seriously developed to break through the "military corridor" through Georgia to "help" allied Armenia.

The most interesting thing is that Jnews.ge's message about this action by the residents of the military town, actual servicemen in the reserve of the Russian army, against the Georgian military quickly disappeared. As if it never existed! And there was only a reprint of the material on the website "kavkaz-uzel" under the eloquent title “Residents of Akhalkalaki were outraged by the plans of the military to block the road” (https://www.kavkaz-uzel.eu/articles/352117/).

And it's clear why. Indeed, the next day, July 21, in the same Akhalkalaki, a "review" of separatists took place, which was already written by "Kavkaz Plus" in the material "Armenian nationalists in Georgia mobilize separatist detachments of many thousands and threaten with terror amid aggression in Tovuz" (http://en.kavkazplus.com/news.php?id=5369#.XyHL2J4zbIU).

The same Jnews.ge reported about this gathering in a very “peaceful” manner: “In Akhalkalaki, a peaceful action“ No war ”is taking place (http://jnews.ge/?p=54510),“ forgetting ”to say that the participants of the event literally "Competed" in nationalist hatred towards Azerbaijan and Turkey, friendly to Georgia, and sent curses to these friendly countries.

But here it turned out to be a paradox, the same residents of Akhalkalaki, seemingly as citizens of Georgia, should understand that the guarantor of their peace and tranquility is the Georgian Army. Or are they waiting for some other army?

The separatists in Akhalkalaki have rebelled against the Georgian army, which is guarding their peaceful life at the most critical moment in the South Caucasus region. And they deliberately do not allow the Georgian army to fence off a strategic military facility.

It turns out interesting "peacefulness". It turns out that the enemies of the "peace-loving" "Javakhk" separatists are not only the Azerbaijani and Turkish but also the Georgian army!

It turns out that before the most massive anti-Azerbaijani and anti-Turkish rally on July 21, the Armenian "Javakhk" separatists held an anti-Georgian action on July 20 as a "warm-up" in Akhalkalaki.

The growth of separatist sentiments in the Samtskhe-Javakheti region and the separatist hostility towards the Georgian army cannot but worry. The fact is that Samtskhe-Javakheti is a region through which the main Eurasian transit energy routes pass. Vital for the economy of Georgia and neighboring countries.

The same strategically important transit communications (the Baku-Ceyhan oil pipeline, the TANAP gas pipeline, the Baku-Tbilisi-Kars railway) also pass through the Tovuz region of Azerbaijan, which was subjected to Armenian aggression. It is clear that the geopolitical players hostile to both Georgia and its economic partners, in fact, have outlined two points vulnerable to the Eurasian transit in their opinion: the Tovuz region in Azerbaijan and Samtskhe-Javakheti in Georgia.

The first blow was struck in the Tovuz region, but it was repulsed by the Azerbaijani army and the aggressors suffered losses. However, the destructive plans of both Armenia and the geopolitical players behind it have not gone anywhere. And this means that, according to the logic of the development of the event, the forces that plan to "cut" the transcontinental transit projects may strike at the second critical point. Namely, in Samtskhe-Javakheti.