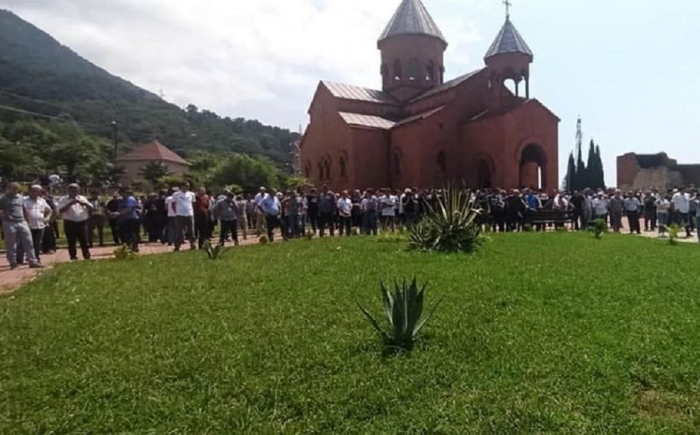 Armenian nationalists continue to behave in the occupied territory of Georgian Abkhazia, from where they are during the 1992-1993 war expelled most of the Georgian population, and seized Georgian houses and apartments as "trophies" as "full-fledged" owners. This is evidenced by July 26, 2020. in occupied Abkhazia in the city of Gagra by the Armenian diaspora, a rally in support of Armenia against Azerbaijan timed to the clashes on the Armenian-Azerbaijani border in the Tovuz region.

At the same time, those who killed and expelled Georgians from their native land - Abkhazia - suddenly start talking about their own "peacefulness" and "condemnation of terrorism." This hypocrisy begins a video about a gathering of Armenian nationalists near the Armenian church in the occupied Georgian city of Gagra:

The Armenian commentator says that this is “a meeting in support of our Armenian people against the Azerbaijani terror”, as well as the fact that “we (Armenians) are against any violence and terror and we want to prove it with our peaceful action”.

But the most interesting thing is that the main organizers of this action are precisely the Armenian terrorists, whose hands are covered in the blood of the peaceful Georgian population. Among them is a high-ranking functionary of the Sukhumi separatist regime, the leader of the Armenian community of Abkhazia and the former commander of Galust Trapizonyan, known for his atrocities against the peaceful Georgian population.

At the same time, the introductions emphasized the unity of the Armenians, and also contained hints that this unity can be used for aggression against other peoples: “We are united everywhere and in everything. The Armenian people are very much appreciated by this. Let those who did not come here today think why they didn’t come. Unity - when there are many of us. And when there are many of us, we can do a lot. " - said one of the speakers.

The official position of the Armenian community of Abkhazia was also voiced, in which it was especially emphasized that “Modern Azerbaijan must face the truth and abandon unfounded claims. The same applies to Georgia, which continues to nurture revanchist plans in relation to Abkhazia. "