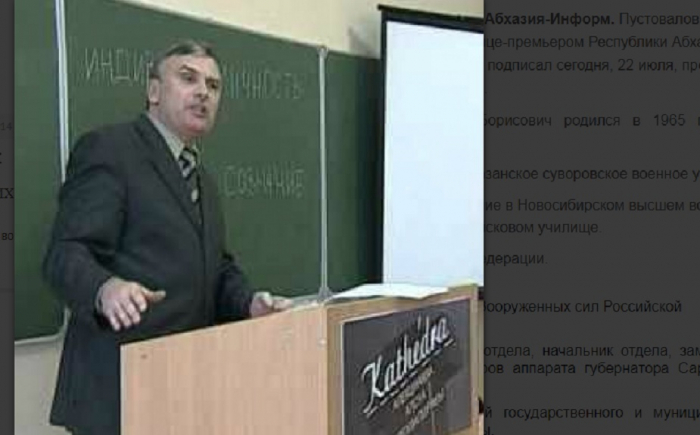 Implementation of plans announced by Zakhar Prilepin to "join" the separatist Abkhazia to the Russian Federation in fact began very quickly.  Staff member of the Main Intelligence Directorate of the General Staff of the Armed Forces of the Russian Federation Sergei Pustovalov was appointed vice-premier of the Abkhazian separatist "government".  The corresponding decree was signed by Abkhazian puppet "president" Aslan Bzhania.

Initially, Sergei Pustovalov had no even the most remote attitude towards Abkhazians and Abkhazia.  He was born in 1965 in Voronezh.  Here are some major milestones in his biography:

In 1982 he graduated from the Kazan Suvorov Military School.

1986 - 1999: Graduated from the Novosibirsk Military Political High School.  - Service in the ranks of the USSR and Russian Armed Forces.

1996 - Graduated with honours from the Humanitarian Academy of the Armed Forces of the Russian Federation.

However, later on, Sergei Pustavlov was "sent to civilian work" for a while.  Further on, his activity looks like this:

2002 - 2004.  - Deputy Head of the Department of State and Municipal Administration of the Volga Region Academy of Public Service

2002 - 2004, Deputy Head of the Department of State and Municipal Administration of the Volga Region Academy of Public Service.  - 2002 - 2004 - Head of the Personnel Service of the Commercial and Industrial Group "Dikomp" in Saratov.

After completing the task Sergei Pustovalov was again as if "suspended from business". Since 2008 he was listed as a "teacher" of the Abkhazian State University". However, it seems that in reality he was tasked to prepare for the role of the future "governor" of Abkhazia by studying its life "from within". All the more that, to all appearances, the puppet "independent rulers" of the separatist Abkhazia were initially supposed to be "Czechs" (and since 2008 they were replaced by four - Bagapsh, Ankvab, Khajimba, Bzhania, which finally discredited the separatist authorities).

And now, to all appearances, the invaders decided to stop the comedy with games of separatist "independence". Moreover, the puppets are "pushing back" and do not want to sell Abkhaz real estate and land to representatives of the Armenian diaspora in the Russian Federation. Therefore, in fact, from now on, the real power in Abkhazia will be neither "President" Bzhania, nor "Prime Minister" Ankvab, but "Deputy Prime Minister" Pustvalov as the "governor" and the leader of the Abkhaz Armenians, head Galust Trapizonyan as the "chief manager". Let us remind you that the former commander of the militants of the Armenian battalion named after Baghramyan, Galust Trapizonyan, was recently appointed chairman of the so-called "State Committee for Standards, Consumer and Technical Supervision" of the separatist Abkhazia.

The notorious "independence" of the separatist Abkhazia is turning into fiction. Moreover, the Russian Federation put the separatists on a "financial hunger strike." Financing from the state budget of the Russian Federation of the separatist authorities has actually been stopped for more than six months, and they are not yet allowed to make money on tourists - the border is closed, despite the fact that in neighboring Sochi, vacationers literally no longer fit on the beaches.

In fact, Sergei Pustovalov, as the “governor of Abkhazia”, must prepare the separatist territory for a quick “official” annexation by the Russian Federation.