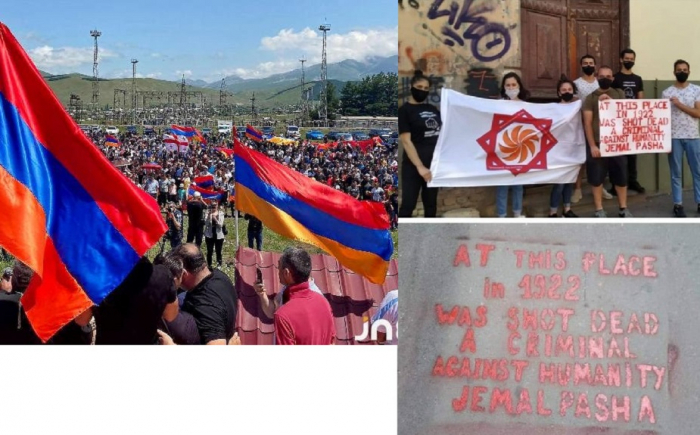 The aggravation of the situation on the Armenian-Azerbaijani border led to a sharp activation of Armenian nationalists and Armenian separatists in Georgia. Moreover, these actions, judging by the intentions of their organizers, set as their task to show their strength not only to the "official" enemies of the Republic of Armenia (Turkey and Azerbaijan), but above all to Georgia and the Georgian state.

In principle, Armenian nationalists regularly carried out their provocative measures in Georgia before. For example, on Victory Day on May 9, they gathered under the patronage of the Georgian diocese of the Armenian Apostolic Church (AAC) in the center of Tbilisi and demonstratively hung out the separatist flags of the so-called "Artsakh" - a formation created by the Armenian occupiers in the occupied territories of Azerbaijani Karabakh.

Recall that the so-called. "Republic of Artsakh" or "NKR" officially recognized the so-called "independence" of Abkhazia, and the so-called. "South Ossetia". Those. Armenian nationalists brazenly demonstrated support for separatism, the dismemberment of Georgia and the expulsion of Georgian refugees from their homes. And this was all the more challenging against the background of the fact that Armenia itself regularly voted against the return of Georgian refugees at the UN General Assembly. In addition, the Armenian nationalists celebrate on May 9 not the Victory Day in the Great Patriotic War, but the seizure of the Azerbaijani city of Shusha - i.e. the occupation of foreign lands and ethnic cleansing.

However, today the actions of Armenian nationalists in Georgia are becoming even more provocative. On July 21, at the city stadium of Akhalkalaki, an alleged "peaceful" action was held at the request of the Armenian organizers. In total, about 3,000 people from Akhalkalaki, Ninotsminda and neighboring villages (mostly young people) gathered at the Akhalkalaki stadium. The pro-Armenian media wrote about this action that allegedly its participants had gathered to "express their support for Armenia, the diaspora and the Armenian people."

Naturally, nothing was said about the fact that the provocation on the Armenian-Azerbaijani border in the Tovuz region was initiated by the Armenian side, but there was no lack of the most outrageous Azerbaijan-phobia and turkophobia. 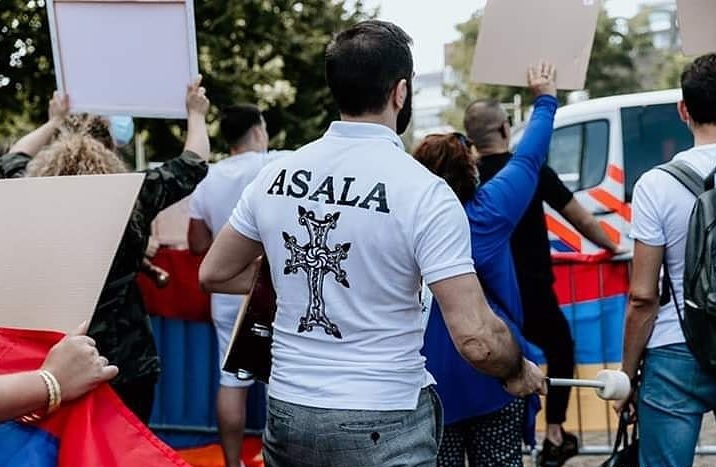 How quickly the Armenian organizations of Georgia managed to mobilize young people and gather thousands of rallies shows that at any moment the separatist militants can be assembled and organized in the same way. Like the Armenian battalion named after Baghramyan, which carried out genocide of the Georgian population in Abkhazia. The separatist underground in Samtskhe-Javakheti has existed for a long time, and it can be mobilized by Armenian nationalists in a matter of hours - and the action on July 21 eloquently showed this. Let us recall that separatism in Abkhazia also began with supposedly “peaceful actions” and “popular gatherings”.

At the same time, the action on July 21 was not carried out by Armenian nationalists and separatists in Akhalkalaki by accident. At the same time, on the same day, an action by Armenian extremists in Tbilisi was organized, which was reported on its Facebook page by the “Armenian Community of Georgia” (https://www.facebook.com/armcommunityge/posts/3048236331960174) with the title “98 years ago on this day and in this place, the criminal against humanity Dzhemal Pasha was punished with death. " The “Armenian Community of Georgia” also published a photo in which the protesters unfurled a poster with the following inscription in English: “on this place in 1922 the criminal against humanity Dzhemal Pasha was shot”.

Recall that Cemal Pasha is an outstanding Turkish military leader, Minister of the Turkish Navy, and later the military governor of Syria and the commander of the Turkish army on the Palestinian front during the First World War. He was basely killed on July 21, 1922 in the center of Tbilisi on Peter the Great Street (today it is Ingorokva Street) by terrorists from the Dashnaktsutyun party, Petros Ter-Poghosyan and Artashes Gevorgyan.

At the same time, the Armenian provocateurs, apparently, specially emphasized the "consonance" of the crime of the Dashnaks of 98 years ago with the fact that after the start of the aggression in the direction of the Tovuz region, the Armenian invaders killed Major General of the Azerbaijani Army Polad Gashimov on the Armenian-Azerbaijani border. The Azerbaijani general died heroically on the front line.

We would also like to remind that in 1905 Dashnaks killed a prominent Georgian figure, the real state councilor (civil rank corresponding to the general rank), the Baku governor Mikhail Nakashidze, son of Aleksandre - the brother-in-law of another prominent Georgian figure, Lieutenant General Ivan Nakashidze, son of Aleksandre (he was also attacked by the Dashnaks - but unsuccessfully). The murderer of Mikhail Nakashidze - Drastamat Kanayan ("General" Dro) then served the Nazis and along with another Nazi criminal Garegin Nzhdeh is considered a "hero" by Armenian nationalists. So if this goes on, the Armenian nationalists in Georgia will "celebrate" along with the murder of Turkish and Azerbaijani warlords and the murder of Mikhail Nakashidze.

Recalling the murder of a Turkish commander of the rank of General Jamal Pasha by their terrorists, and even on Georgian territory, Armenian nationalists seem defiantly "hinting": "We will kill everyone whom we consider our enemies." Those. it is a threat of terror not only for Turkey and Azerbaijan, but also for Georgia. The terrorist act, which was carried out 98 years ago by Armenian terrorists, is today openly celebrated in the center of Tbilisi by Armenian extremists, propagating it among the Armenian community of Georgia as a model of "normal" behavior. Only this model of behavior in the Caucasus can become the key to a destructive war in the South Caucasus.

The murder of Jemal Pashiv in 1922 showed that it is not the government of Soviet Georgia, and not even the occupying Red Army, but Armenian terrorists who are in charge of Tbilisi. A clear hint of who is claiming the role of "master" of Georgia at this difficult moment. Especially when you consider that the rally in Tbilisi took place simultaneously with the thousands-strong Armenian rally in the separatist-infected Akhalkalaki.