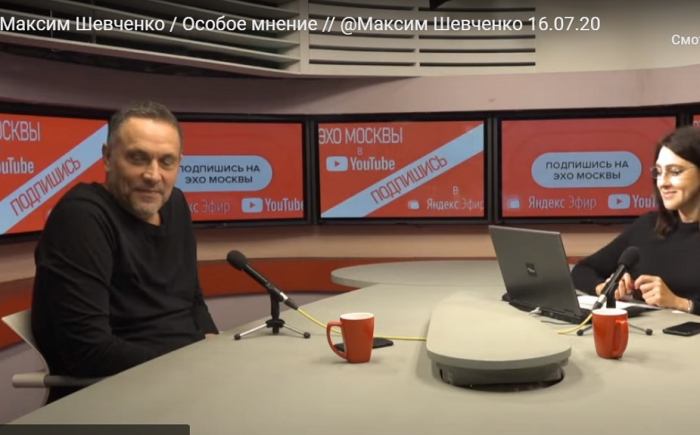 On the evening of July 16 in the program, "Special opinion" (https://youtu.be/uA5Q54MMoV8) on "Echo of Moscow" very interesting information was reported by the famous Russian journalist Maxim Shevchenko. Here is an excerpt from his conversation with the host Olga Bychkova regarding the current armed confrontation on the Armenian-Azerbaijani border:

“O. Bychkova― And what can this lead to if, indeed, everything develops according to a serious scenario.

M. Shevchenko - I think that the whole region, the whole world is like a house of cards. The next step, for example, Russian troops may demand from the Georgian government a military corridor to Armenia, because within the framework of the Collective Security Treaty Organization, it turns out, in due time, Mikhail Saakashvili signed an agreement with Russia that, if necessary, Georgia undertakes to provide Russia with a corridor for military cargo, for military supplies to Armenia. For example.

O. Bychkova― And what will happen next?

M. Shevchenko - Look further, remember the 14th year, when everything began with the assassination of the Archduke, Austria presented an ultimatum to Serbia. Who thought that if some crazy Serb killed even the heir to the Austrian throne, this would lead to the fact that millions of Germans, French, British and Russians would poison and kill each other in countless quantities with chlorine? Because sometimes a war, I say again, collapses like a house of cards. This is how one card falls - and everything falls, and the world is already changing completely irreversibly".

In principle, as is known, after August 2008, many Russian-Georgian agreements were canceled due to Russia's aggression and the occupation of Georgian territories, which occurred not least through the efforts of the Armenian lobby, including Russian Foreign Minister Sergei-Lavrov-Kalantarov. However, if there was such an agreement, it is mortally dangerous for Georgian statehood.

If this happens, it will be the end of Georgian statehood. The "military corridor", at best, will "tear" Georgia into two unconnected pieces (in this case, Georgia will automatically lose Samtskhe-Javakheti). At worst, this corridor "expands" to the size of the entire unoccupied territory of Georgia.

And naturally, Armenian “Javakhk” separatists and representatives of the Armenian “fifth column” will immediately begin to establish their orders on Georgian soil. All this will be accompanied by ethnic cleansing and genocide of the Georgian population as it was under the "cover" of the Russian army in Abkhazia.

The Armenian nationalists have long had an "ideological substantiation" of their claims to the whole of Georgia. They officially apply for 465 Georgian churches in all regions of Georgia, and also everywhere claim that Tbilisi and other Georgian cities were “built by Armenians”.

Maxim Shevchenko also mentions that "Turkey also has an agreement on military transit with Georgia." However, in the case of the Russian “corridor” aggression only increases the likelihood of inciting the Third World War the battlefield for which will be little Georgia, which this war will literally “smash”.

It is impossible to underestimate the current threat to the future of Georgia and the whole of humanity, which the Armenian military adventure in the world war.