Who provokes the Armenian-Georgian war? Separatism in Samtskhe-Javakheti is rekindled 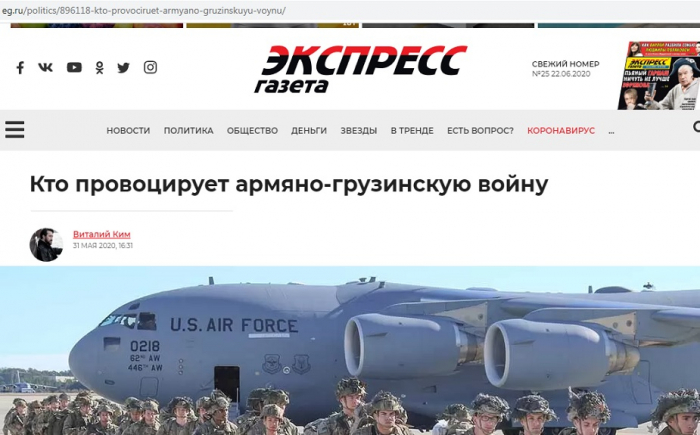 The manic desire of the Armenian lobby, especially entrenched in the Russian Federation, to achieve the dismemberment of Georgia and the separation of the Samtskhe-Javakheti region from Armenia in favor of Armenia. It would seem that all countries, including Armenia, have a lot of problems associated with the coronavirus epidemic, the Armenian economy is collapsing, the country is again in a political crisis. But the “well-wishers” of Georgia from among Armenian nationalists can not calm down and once again predict the Georgian-Armenian conflict, the separatist rebellion in the Samtskhe-Javakheti region (according to Armenian terminology in “Javakhk”), its separation from Georgia and accession to Armenia.

It is to these plans, which are not even hidden, that the clearly ordered article by Vitaliy Kim “Who provokes the Armenian-Georgian war” (https://www.eg.ru/politics/896118-kto-provociruet-armyano-gruzinskuyu-voynu/) in Russian "Express newspaper". We give this material in full with our comments:

“NATO wants to create a new“ hot spot ”in Georgia

The United States and Georgian politicians are talking about deploying a military alliance base in the Javakheti region - in the south of the country. There, they could transfer aircraft and even nuclear warheads from Turkish Incirlik. Now, Turkish President Erdogan is a very unstable ally for Washington. And the region is geographically very well located: both the Middle East and Russia are close. But experts say that if the foot of a NATO soldier sets foot on this land, a new wave of separatism will sweep over it. And from Georgia - after Abkhazia and South Ossetia - one more piece will disconnect.

Javakhk is a region of compact settlement of Georgian Armenians. They believe that the region was once part of Greater Armenia. But Georgians do not agree with this. The accuse the authorities of the Russian Empire of allegedly settling primordially Georgian lands with Armenian refugees. In general, this is a typical situation for the Caucasus. The issue of historical memory already led to armed conflict between these peoples at the beginning of the 20th century. In 1918, the Armenian side demanded these lands from the then created Democratic Republic of Georgia. Fierce fighting went on for a month. At a peace conference, the parties agreed to divide the disputed territories. The northern part of the county - present-day Javakhetia - was transferred to Georgia, the southern - to Armenia. So left in the Soviet Union. But interethnic tension has not disappeared.

Beyond the friendship of nations

As in other suburbs of the USSR, a national revival began in the 80s. Anti-Armenian sentiments increased in Georgia. In response, separatism began to manifest itself in the region. The inhabitants of Javakhetia did not want to live in a backward country under the control of the West. In the 90s, the region lived its own life, with little contact and submission to the authorities in Tbilisi. The fact that the main currency there was the Russian ruble says a lot. ”

Let's start with the last paragraph - regarding the allegedly "anti-Armenian" mood in Georgia in the 80s - this is a blatant lie. There were no such moods in Georgia. As in Azerbaijan, until the Armenian nationalists began to demand the secession of Karabakh and expel the Azerbaijani population from the Republic of Armenia. And in the 80s, when Armenian provocateurs were preparing separatist rebellions in Abkhazia and Tskhinvali, there were no anti-Armenian sentiments in Georgia.

Even after the Armenian fighters in Abkhazia committed brutal reprisals against the Georgian civilian population, no one in Georgia speaks a word against the Armenians. Armenians massively travel to Georgia on vacation, do business, and generally feel at ease in Georgia. But at the same time, the Armenian nationalists seem to be doing everything to “spit in the soul” of the Georgian people, because how could they otherwise be characterized by their arrogant claims to 465 Georgian churches.

“When Mikheil Saakashvili came to power, he began to subjugate the rebellious region to the center and populate it with the titular people. In fact, he carried out ethnic cleansing. This further complicated the difficult international issue. ”

Another blatant lie. There was no “cleansing” and no settlement of non-Armenians in Samtskhe-Javakheti. But ethnic cleansing of the Georgian population in Abkhazia was. And until now, Armenian nationalists have not allowed Georgian refugees to leave their homes and apartments in Abkhazia, and Armenia regularly voted against this at the UN General Assembly.

“In 2002, a branch of the University of Tbilisi was opened in the main city of the region, Akhalkalaki, in which teaching was conducted exclusively in Georgian. Although the majority of the local population speaks and studies in school in Armenian. Almost all students come from other areas for which the authorities created the most favorable conditions. Everything is being done so that they remain here after training. Local schools are constantly trying to carry out cultural assimilation. In response to these actions, local Armenians en masse adopt Armenian citizenship.

In recent years, there have been many ethnic conflicts in Javakheti. So, in 2004 there were mass fights between Georgians and Armenians because of the victory of the Georgian football team over the Armenian. Although in reality it was a real ethnic conflict because of the historical dispute whose land it is.

A few years ago there was another mass brawl. One side claims that drunken Georgians attacked the Armenians for no reason at all, who decided to hold a mourning rally in memory of the victims of the genocide in the Ottoman Empire. And the Georgians say, they say, the Armenians shouted: "Javakhetia is Armenian land, and you are guests here."

Recently, police beat Armenian activists for wanting to put a khachkar in one of the churches - a stone with a cross depicted. The essence of the problem is that Georgians consider this church their own and do not want to see any Armenian symbols there. ”

The author, of course, did not mention that in Kumurdo, Armenian extremists stoned the Georgian police with stones. He has the Georgians “to blame” for the fact that Kumurdo Cathedral, where there are exclusively Georgian inscriptions, they consider their own, Georgian.

And whose then is he? It stands on Georgian soil, if it was built by Georgians, Georgians have been praying in it for centuries. And the Armenians, after settling on Georgian lands in 1830, simply began to dismantle it into their outbuildings.

And of course, Georgians do not want to see in their holy place alien "dragged" khachkars and other Armenian symbols, because this will mean its complete capture by Armenian nationalists.

The region really has a powerful conflict potential. And if you want, you can easily provoke a "hot spot". This territory has long been watched by the Americans, who do not allow tension to subside.

Washington recently carried out a cunning provocation. At a hearing in the US Congress, the issue of providing financial assistance to Armenia was discussed. Congressmen allocated money to the Armenians of Javakhetia. Although this region is part of Georgia, not even autonomy. Why the United States is helping them bypass the official authorities is not very clear. This statement provoked protests from politicians in Tbilisi.

- The Americans make it clear that if the Georgians ever want to leave their zone of influence, then Georgia will immediately lose one more historical area. The American leadership can also use ethnic conflicts in the Caucasus to divert Russia's attention from other regions of the planet, such as Syria, ”said political analyst Grigory Mironov.

Many experts assure: if you provoke a “hot spot” here, then the whole region may burn. Azerbaijan is stepping up its offensive on Nagorno-Karabakh, and Georgia - on South Ossetia and Abkhazia. They are only stopped by the fact that Moscow can again force them to peace. If some kind of political crisis or instability occurs in the Russian Federation, the region will immediately become mired in interethnic conflicts. About the same as Yugoslavia. ”

The article directly speaks of plans to foment separatism in Samtskhe-Javakheti and the annexation by Armenia of this Georgian region. And it is even supposed to use the Americans for these purposes. The hostility of the Armenian nationalists to Georgia is such that they do not shun the dirtiest provocations in order to seize Georgian lands. And one cannot underestimate this threat. After all, the Armenian lobby is very influential not only in Russia, but also in the USA.