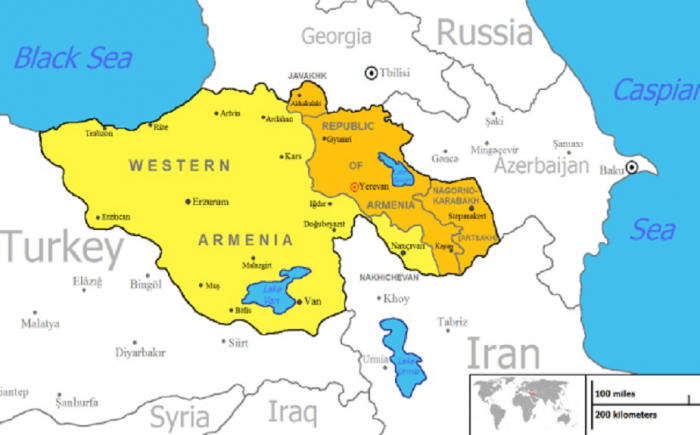 The recent statement by Russian President Vladimir Putin that allegedly the former Soviet republics that became independent states received “gifts” from the Russian people and Russia in the form of territories, was perceived by many as a signal that the Russian Federation could go on revising and redrawing borders, as well as new annexations.

“When creating the Soviet Union, the right to exit was prescribed, and since the procedure was not prescribed, the question arises: if a particular republic became part of the Soviet Union, but got a huge amount of Russian lands in its luggage - traditional, historical, Russian territories, and Then decided to leave the composition? But then at least I would come out with what I came and not bring gifts from the Russian people with me, ”said Vladimir Putin.

Recall that at present the Russian Federation is in fact occupying the Ukrainian Crimea (annexed) and the Donbass, Georgian Abkhazia and the Tskhinvali region (there are supposedly “independent” separatist regimes recognized by the Russian Federation) and Moldavian Transnistria. Who initiates such a policy of the Kremlin is not difficult to guess. All separatist conflicts began after the separatist conflict in Nagorno-Karabakh was fired up in its "image and likeness." "Independence" of the separatist Abkhazia, the so-called South Ossetia and Transnistria are recognized by the so-called Armenian occupiers "NKR" in Azerbaijani Karabakh.

Why this was necessary for the Armenian lobby is also no secret. Indeed, if it were not for these occupation and separatist projects, then Azerbaijani Karabakh occupied by Armenia, where the separatist “NKR” was created by the occupants, would be the first and only precedent for the occupation and redrawing of borders in the post-Soviet space.

However, the peculiarity of Armenian nationalism is its “gluttony”. Armenian nationalists have long forgotten that without exception, all the lands on which the Republic of Armenia is a “gift” to Russia, and at the expense of others, at the expense of Azerbaijan and Georgia. But even the minimal gratitude for this is not given to the Russians in Yerevan. And they understood Putin’s words about “gifts from the Russian people” not as a reminder of his ingratitude, but as a “guide to action” regarding new territorial claims to neighboring states.

This is evidenced in particular by Hakob Badalyan’s material “Putin’s threat: who donated the Armenian lands” (https://www.lragir.am/ru/2020/06/22/177100/) on the resource lragir close to Prime Minister Nikol Pashinyan. Here is an excerpt from this material:

“Moscow gave the Armenian lands to Turkey and Azerbaijan from the lord’s shoulder, according to Russian-Turkish treaties.

In 2021, these agreements will be 100 years old. In fact, their century ended with the Artsakh war, in which the Armenian victory crossed out the Russo-Turkish treaties. At first, the Armenians expected that their lands would be returned culturally and politely, but then it became clear that they could only be liberated.

From this point of view, to think that Russia will ever recognize a crime against Armenians and repent is not entirely realistic. Therefore, the question is whether Armenia will be able to create a situation in which Russia will be forced to admit sin and refuse to prolong the Russian-Turkish treaty, because this will already be its problem, not of the Armenians”.

Here, Russia and Putin are no less demanded that they take away from Turkey and Azerbaijan the lands claimed by the Armenian nationalists and give them to Armenia. And by default it is supposed to take away Samtskhe-Jvakheti (“Javakhk”) from Georgia. Moreover, always the Armenian nationalists recalling the Moscow and Kars treaty of 1921 recall the "primordially Armenian Javakhk" supposedly "donated" by the Bolsheviks of Georgia.

In Yerevan, they seized upon the words of Vladimir Putin as an occasion to cast doubt on the current borders in the South Caucasus, the Moscow and Kars treaties, and again put forward territorial claims against Armenia’s neighbors. It is clear that Armenia does not have military power in order to take away land from Turkey and expand the zone of occupation of Azerbaijani lands. Therefore, there is a danger that Armenia will require a revision of borders, especially with Georgia. Moreover, even without such a revision, the Armenian side is constantly shifting the Armenian-Georgian border to the north and has already appropriated the ancient Georgian monastery of Khujabi.