Armenian nationalists are sure that Georgia has forever lost Abkhazia and South Ossetia. But this is only as long as the Russian Federation is under their authority 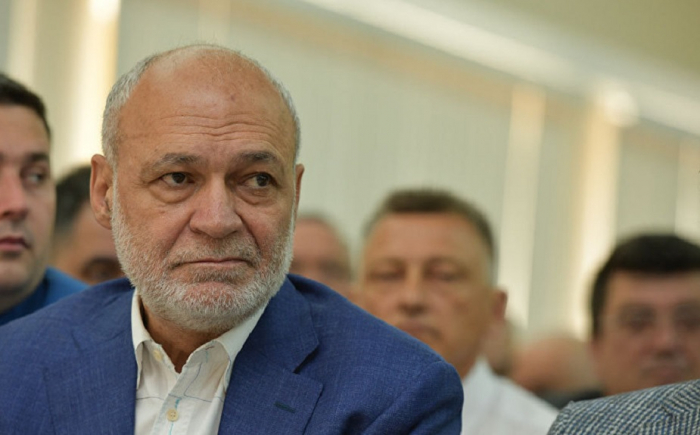 The arrogance and self-confidence of the Armenian nationalists, who are sure that they have enslaved Russia forever and put Russian foreign policy under their control, is amazing. So, for example, compatriots and fellow student of the Armenian nationalist and Foreign Minister Sergei Lavrov-Kalantarov, political analyst Andranik Migranyan, once upon a decade of the "recognition" of the "independence" of separatist formations on the territory of Georgia by the Kalantarvian Ministry of Foreign Affairs of the Russian Federation, declared that "Georgia has forever lost Abkhazia and South Ossetia. " (https://sputnik-abkhazia.ru/radio/20180826/1024792427/migranyan-gruziya-navsegda-lishilas-abxazii-i-yuzhnoj-osetii.html).

“The Americans, when they recognized Kosovo, did not think that Russia would go that far. They were naive and stupid, because after Putin’s Munich speech in 2007, when he said that they wouldn’t allow a unipolar world and ignore their interests, in 2008 there was a tough and decisive answer. Russia, of course, after the adventure, Saakashvili rebuffed. Georgia has long lost Abkhazia and Ossetia; back in Soviet times, the republics placed themselves outside of Georgia. But Georgia lost their de jure when Russia recognized the independence of the entities that were part of Georgia. Secondly, Russia today guarantees the security of Abkhazia and South Ossetia, which is very important and suggests that Georgia has lost these territories forever, ”Migranyan said.

Moreover, Andranik Migranyan himself admitted that he was pushing his fellow student and fellow tribesman to separate Abkhazia from Georgia (which the Armenian nationalists “looked after” for themselves) and the Tskhinvali region. “On the pages of Izvestia, I had an article“ Saakashvili seeks independence of Abkhazia and South Ossetia. ” I must tell you when he made his warlike statements, I sent this article first to Sergey Lavrov, who I studied with in the same course, I said that I wanted to publish the article, he said that it was interesting, ”said Migranyan.

Thus, the "independence" of Abkhazia and the so-called. South Ossetia is a "purely Armenian plan" - but not Russian at all.

In principle, the illusion that Georgia “forever” lost Abkhazia and Tskhinvali is trying to impose itself today, is that Lavrov-Kalantarov himself everywhere declares that Georgia must “recognize new realities”. This is despite the fact that the Armenian nationalists themselves are not going to recognize the realities regarding the western borders of the Republic of Armenia and include Eastern Turkey in their “great Armenia” (and, at the same time, Georgian Samtskhe-Javakheti, in their terminology “Javakhk”). Moreover, Armenian nationalists believe that Russia is obliged (!) To conquer and surrender these Turkish and Georgian territories to the Armenians.

But the fact of the matter is that thanks to the dominance in power in the Russian Federation of representatives of the Armenian fifth column, Russia no longer has the opportunities that it had when, by the will of the Armenian puppeteers, it was partitioning Georgia and creating separatist formations. Through the efforts of the “Armenian friends”, Russia is now surrounded by a dense ring of enemies. Because of Kalantarov, with his manic desire to create precedents for redrawing foreign territories, brotherly Ukraine went to the camp of the enemies of Russia. Through the efforts of the Armenian lobby, the Russian Federation got into the war in Syria. Separatist tendencies are growing in Russia itself - and separatists can be understood. Why the former autonomies of Abkhazia and so-called South Ossetia can be "independent", and the national autonomy in Russia is impossible?

The last months for the Russian Federation have been generally disastrous. Oil prices fell, coronavirus “self-isolation” (in fact introduced by Prime Minister Semi-Armenian Mishustin) led not only to weakening the economy, but also to an unprecedented increase in the powers of the regions (one of which the Krasnodar Territory Armenian nationalists had already “chosen” for themselves), with tendencies towards separatism. There is not even enough money to support puppet regimes in Sukhumi and Tskhinvali. In such conditions, they will continue to submit to the “wishes” of the Armenian lobby for Russia to be suicide.

There are two ways out:

1. Russia gets rid of the traitors and the “fifth column” in the first place from the representatives of the Armenian lobby in their power, but then it immediately returns to the corresponding real interests of the Russian people - friendship with fraternal half-hearted Ukraine and single-faith Georgia and ceases to support separatism.

2. Either the Armenian lobby and the fifth column “finish off” Russia, it breaks up with their efforts, and then the occupied sub-machine gunners return to Georgia to occupied Abkhazia and the Tskhinvali region.

In any case, Armenian nationalists consider Abkhazia “their own” too early. The fact that they control the economy there and that the Armenians there have become the largest ethnic community does not mean anything. The situation may change at any time.

Not least due to the fact that creating from Armenia’s Abkhazia and Krasnodar Territory “another Armenia” on the Black Sea coast, the Armenian “fifth column” in the Russian Federation cuts the branch on which it sits. A country as vast as Russia cannot fully act only in the interests of a small group infected with nationalism. She has her own "natural" interests. And she will either drop the fifth column that has sucked in, the lobby parasites, or they will destroy her along with them.