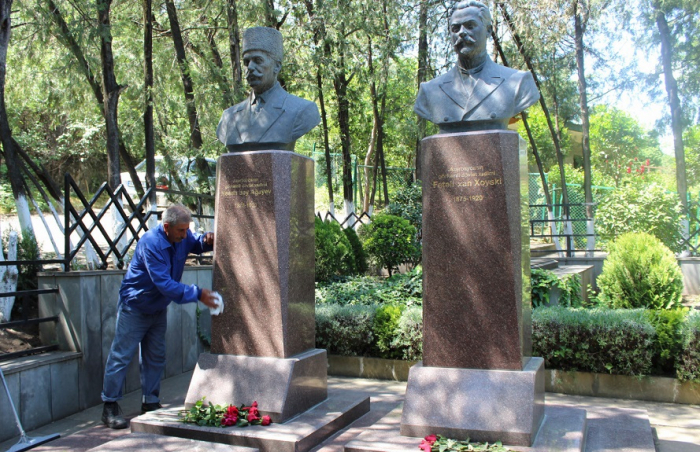 Exactly 100 years have passed since the day when, on June 19, in Tbilisi, members of the Armenian nationalist party “Dashnaktsutyun” Aram Erkayan and Misak Grigoryan were meanly killed by shots in the back of Fatali Khan Khoysky, a prominent Azerbaijani public and political figure, one of the founders of the Azerbaijan Democratic Republic ( ADR). The murder took place on Rustaveli Avenue, when Khoysky with the ex-Minister of Justice of the Azerbaijan Democratic Republic Halil-beck Hasmamedov passed by the building of the Opera and Ballet Theater named after Paliashvili. Khalil-bey Khasmamedov was injured, but survived.

Just a month later, another prominent Azerbaijani politician was killed by Dashnak terrorists - a doctor, journalist, deputy chairman of the parliament of the Democratic Republic of Azerbaijan, Hasan-bey Agayev. Fatali Khan Khoysky and Hasan-bey Agayev were buried in the Muslim city cemetery of Tbilisi, today their graves are located on the territory of the Botanical Garden.

Fatali Khan Khoysky, Hasan-bey Agayev and other leaders of the Azerbaijan Democratic Republic were forced to emigrate to Georgia after the occupation of Azerbaijan by the Red Army. Not even a year after their tragic death and the Red Army will also occupy Georgia, and in many ways the Dashnaks will help her in raising the pro-Bolshevik rebellions in the Lore zone and calling for the help of the Red Army.

As you know, according to the Caucasian traditions of hospitality, killing a guest in a strange house is the height of meanness and, above all, in relation to the owners. Fatali Khan Khoysky and Hasan-bey Agayev were guests of Georgia and the Georgian people, the Georgian government as far as possible ensured their safety. And the crime of the Dashnaks spits primarily in the direction of Georgia. It turns out that the Dashnak bandits in a strange house crack down on those who are visiting and also consider this “heroism”.

Khoysky and Agayev were sentenced to death by Dashnak terrorists for saving the Azerbaijani population of Baku from the genocide organized by the Dashnaks and Bolsheviks in 1918. Fatali Khan Khoysky was the first victim in the list of 41 people approved at the Ninth Congress of Dashnaktsutyun as part of the operation Nemesis. That was the name of the Dashnak terrorist campaign to organize the killing of Ottoman statesmen, allegedly for the mythical "1915 genocide." As we see in this campaign, we also added a list of Azerbaijani statesmen who did not have anything to do with the events of 1915 in the Ottoman Empire. The ultimate goal of the Nemesis terrorist operation was to intimidate the Turkish and Azerbaijani peoples in order to break their will to resist external aggression and seize their lands.

The 100th anniversary of the murder in Tbilisi of Fatali Khan Khoysky and Hasan-bey Agayev once again makes us think that the Armenian nationalists, Dashnaks and agents of the Armenian special services operating in Georgia, pose a mortal danger to Georgian statehood. Armenian nationalists and provocateurs seek to foment interethnic conflicts in Georgia and at the same time take every opportunity to destabilize the internal situation in Georgia. For example, a year ago, Armenian citizens participated in an attempt to seize the Parliament of Georgia by force, including those associated with the leadership of Armenia and Prime Minister Nikol Pashinyan. And of course, the danger of Armenian terrorism has not disappeared.

100 years ago, the insufficient vigilance of the Georgian authorities in the fight against Armenian terrorism and the Armenian “fifth column” inside the country led not only to the murders of prominent Azerbaijani statesmen in Tbilisi, but also ultimately cost Georgia independence. After all, the rebellion, which became the reason for the occupation of Georgia by the Red Army, was organized by Armenian nationalists. And today the danger of organizing provocations by Armenian nationalists in order to destroy Georgian statehood, unfortunately, has not disappeared.