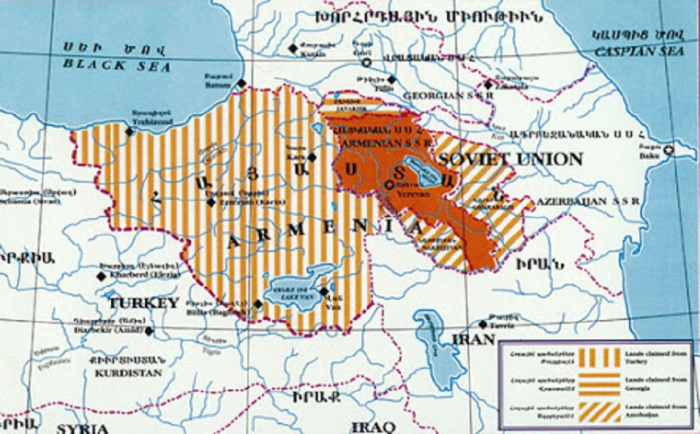 Armenian nationalists still do not forget about their claims to foreign lands, including to southern Georgia (Samtskhe-Javakheti or in Armenian terminology “Javakhk” and Kvemo Kartli). Otherwise, how can one explain that the publication lragir close to Nikol Pashinyan an article “Platform for the Regional Status Quo: The Return of the Armenian Question” (https://www.lragir.am/ru/2020/05/26/174722/) with an illustration of the map where, in addition to the Turkish and Azerbaijani lands, the territory of “great Armenia” also includes the southern territories of Georgia. With the same signature - "Javakhk".

The appearance of this map looks cruel because it was published on May 26th. On the Independence Day of Georgia. This is an “unofficial addition” to the official congratulations of the same Nikol Pashinyan to the Georgian government.

The content of the material is also interesting. It states that “Presenting the report on foreign policy in 2019, Foreign Minister Zohrab Mnatsakanyan reaffirmed the three fundamental principles on which the foreign policy of Armenia is based - sovereignty, pan-Arminianism, and interaction.”

Pan-Arminianism, namely claims to the lands of neighboring countries, which, according to Armenian nationalists and falsifiers were part of the mythical "great Armenia", remains a fundamental principle of Armenian foreign policy. The fundamental principle of relations between Armenia and Georgia in fact from the point of view of Yerevan is territorial claims on the same Samtskhe-Javakheti, where Yerevan supports separatist sentiments. This is despite the fact that Abkhazia has already become "Armenian", where ethnic Armenians have become the majority and completely dominate the economy.

In relation to Georgia, this means a real danger of aggression if Yerevan considers that the rights of Armenians in Samtskhe-Javakheti are “violated”. It is well known how Armenian nationalists are able to shout to the whole world that they are “subjected to genocide” - while at the same time carrying out aggression and ethnic cleansing.

You must not underestimate this danger. Moreover, it follows from the article in lragir that Yerevan does not intend to abandon territorial claims, even if Russia ceases to support Armenia or leaves the South Caucasus. It directly hints that, in this case, and in order to prevent a “vacuum”, Yerevan will find new patrons and will again strive to seize foreign territories. And it is naive to believe that the West, where there is an influential Armenian diaspora, will then stand by the side of Georgia if it comes to aggressive Armenian claims.