Armenian nationalists and their separatist sabotage and “claims” in Moldova 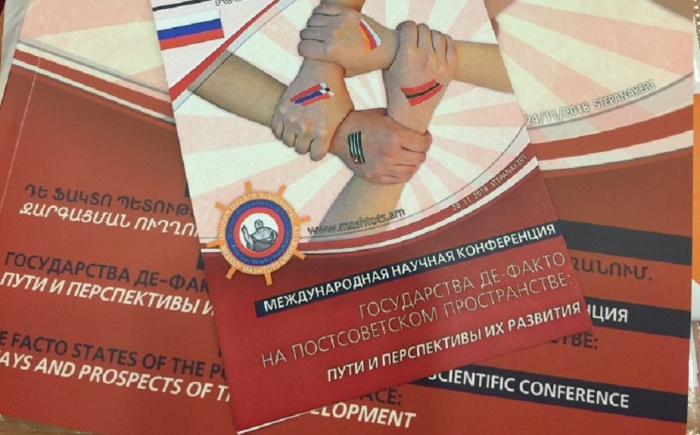 To begin with, the first separatist war outside of Azerbaijani Karabakh, the Armenian lobby kindled in Moldova. Pro-Armenian propaganda then strongly emphasized that some "peoples of Transnistria and" Artsakh "were allegedly" oppressed "by Moldova and Azerbaijan.

True, organizing ethnic cleansing in Moldavian Transnistria did not work, since the separatist entity was called the “Transdniestrian Moldavian Republic” and expelling all ethnic Moldovans from there would be nonsense (however, hundreds of supporters of Moldovan unity were nevertheless expelled or repressed). But the experience of the separatist war was gained. And then many separatist fighters from Transnistria fought shoulder to shoulder with Armenian fighters and separatists in Georgian Abkhazia.

As in Georgia and Moldova, Armenian nationalists and “historians” claim their “special role as Armenians in the history of Moldova”. This is promoted in particular by the Armenian “historian” living in Chisinau, Eduard Alkhazov, about which at one time the material was published in the publication “Sputnik Moldova”: “Forgotten History of the Armenians of Moldova: gentlemen, merchants and diplomats” (https://ru.sputnik.md /society/20180629/20210608/armjane-moldova-manuc-bej.html. Here is an excerpt from this article):

"Talking about the Armenians of Moldova, he recalled the Moldavian ruler of Armenian descent, Ioan Lut, known in European sources as Ivonia, who fought against Turkish rule.

Later, among the Moldavian boyars, Armenians appeared. For example, the famous Manuk Bey Mirzoyan - Turkish, and then the Russian statesman of the late XVIII - early XIX centuries.

"He was a consultant to many high-ranking Turkish officials, rose to the level of one of the main financiers of the Ottoman Empire and dragoman - an assistant to the Minister of Foreign Affairs. In that political situation, Mirzoyan decided to serve Russia. Manuk Bey took an active part in the signing of the 1812 Bucharest Peace Treaty, which took place in his palace, "said the expert.

Large communities of Armenians were located in Chisinau. In the current capital of Moldova, the Armenian churches of the Holy Virgin (1804) and the chapel church of the Resurrection of Christ (1915) have been preserved. Near the latter, some time ago, archaeological excavations began.

Alkhazov noted that in Moldova, unfortunately, the history of Armenians is practically not taught in schools and not studied”.

At the same time, the claims of Armenian nationalists on churches and lands of Moldova are alarming for Moldovan patriots:

In order to understand how “justified” the Armenian claims are for the exclusive role in the history of Moldova, we will begin with the fact that historically the Armenian community here had at least some influence only because the Armenians were subjects of the Ottoman Empire, on whom Moldova was a vassal. Those for whom the sultan was not a great authority did not respect his subjects of the Armenians. For example, Zaporizhzhya Cossacks, who participated in all kinds of political events in Moldova, regularly plundered and expelled Armenian merchants as heretics.

In this connection, the story of the same ruler, Ioan Voda Lut, whom Eduard Alkhazov and other Armenian historians attributed to the “Armenians” for some reason only on the basis of his nickname “Armanul” (which means Armenian) flickering in some historical recollections, is very interesting in this connection.

It is interesting that very little is known about the origin and youth of Ioan Voda. In various sources he was called "Moldavian", "Polish", "Armenian" most likely referring to the origin of the mother (even foggier). The only thing that is known for sure is that he belonged to the Mushat dynasty ruling at that time in Moldova, which had nothing to do with the Armenians.

But the maximum that Ioan Voda Lut could have was a mother, originally of Armenian religion. Religions - but not of origin, because in those days the “Armenians” were classified as professing Armenian-Gregorianism and Albanian-Udis, and Armenian-Kypchaks, who, because of their warlike nature, could be perceived by the Moldavian elite as "equal".

The fact that the father of Ioan Voda was not and could not be an Armenian is evidenced by the story of his brother, the ataman of the Zaporizhzhya Cossacks Ivan Podkova, who, after the death of Ioan Voda Lut, managed to seize the throne of Moldavian rulers for 2 months.

The Podkova is not a surname, but a nickname. It means “horseshoe” because according to legend Ivan Podkova was so strong that he bent a horse horseshoe in his hands. Although many historians doubt that Ivan Podkova was indeed the brother of Ioan Voda Lut, one thing is obvious, Ivan Podkova did not have a drop of Armenian blood, knowing the attitude of the Cossacks to the heretical Armenians, and the one whom Ivan Podkova called his father. Ivan Podkova and Ioan Voda could have different mothers (there are no known cases when a mother would have named her two sons with the same name Ivan-Ioan), but their father certainly had nothing to do with the Armenians.

As for the supposedly “Armenian” churches in Moldova, it is known that the Church of the Holy Virgin in Chisinau was built on the ruins of an old Moldavian church. Like the whole of Chisinau, in 1739 the old Moldavian church burned down, and in 1804 a new but already Armenian church was built in its place. The Armenians, using their wealth and influence in Istanbul, began to appropriate the Moldavian Orthodox churches during the Ottomans (and at the same time accuse the Ottoman sultans of "genocide"!).

However, the protection of the Ottoman sultans by the rich Armenians in Moldova did not prevent the betrayal of the latter, as evidenced by the history of the same Manuk-Bey Mirzoyan.

Claims by Armenian nationalists to prominent historical figures, the land and especially the church in Moldova most likely, as well as support for separatism in Transnistria, have the ultimate goal of extending the “analogy” to Georgia (recall that all the kings and prominent figures are included in the “Armenians” in Georgia, including Shota Rustaveli). Given the fact that Armenian nationalists claim 465 Georgian churches, they can seize churches in Georgia, using the “Moldavian precedent” in the same way as the Transnistrian scenario was used by the Armenian lobby to incite separatist wars in Georgia.