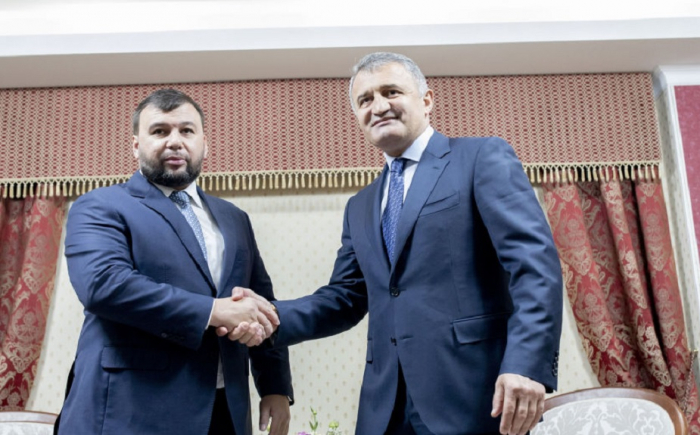 It is gradually confirmed that the Kremlin is gradually “dumping” the content of the puppet separatist regimes of Sukhumi and Tskhinvali. And he does it very cunningly, forcing them to deliver “humanitarian aid” to their other puppets. Moreover, the identity of these puppets allows you to be 100% sure that almost nothing will come to the separatists in Sukhumi and Tskhinvali. All plunder "along the way."

The Tskhinvali separatist news agency "Res" recently reported that the so-called “President of South Ossetia” Anatoly Bibilov “discussed on Wednesday with the head of the DPR Denis Pushilin the situation related to the spread of coronavirus infection, as well as the transfer of humanitarian supplies to South Ossetia for events to counteract the spread of COVID-19.

During the conversation, Anatoly Bibilov and Denis Pushilin discussed the situation related to the spread of coronavirus infection, as well as the transfer of humanitarian supplies to South Ossetia to take measures to counter the spread of COVID-19.

The head of South Ossetia thanked the head of the DPR for help and support ... Bibilov also emphasized that helping the DPR in the fight against coronavirus infection is very important and timely for the population of South Ossetia. The President noted that fraternal peoples should always stand next to each other in difficult moments...

The humanitarian aid that the Donetsk People’s Republic intends to hand over to the representative of South Ossetia during the current week includes personal protective equipment, including filter masks, disinfectants, and medicines. All products are manufactured in the DPR”.

Note that the Kremlin used to be very PR for “South Ossetia’s help” on any occasion. It was emphasized that "Russia will not abandon the people of South Ossetia in difficult times".

And now the "difficult moment" has arrived. On separatist territory, the number of people infected with coronavirus is growing every day. Separatist medicine is destroyed as a phenomenon. It's time to "come to the aid of the fraternal South Ossetian people".

But the Kremlin "withdrew" from help. And he instructed "to help" the puppet head of the DPR Denis Pushilin. The very mention of the name of this person among knowledgeable people leads to an unambiguous conclusion - "then everything will be stolen".

Before the events in Ukraine from 2011 to 2013, Denis Pushilin was a functionary of the well-known structure - the financial pyramid "MMM" of the swindler Sergey Mavrodi. At first he was a “volunteer”, and then, when the eponymous “political party” was created on the basis of MMM, Pushilin became a functionary. But then, with the Kremlin’s filing, a separatist project began to be promoted in Donetsk, and Pushilin quickly realized where much more could be made.

Pushilin knows how to deceive and rob the gullible citizens, how to lure people into the financial pyramid and rob those who are on its “lower feet”. And now she is demonstrating her “talents” with might and main in the DPR separatist, whose “president” he became with the filing of no less thieving Vladislav Surkov. The population of the DPR is living in poverty, which cannot be said about Pushilin and his entourage.

In itself, Pushilin is a vile and unpleasant person, even for "associates."