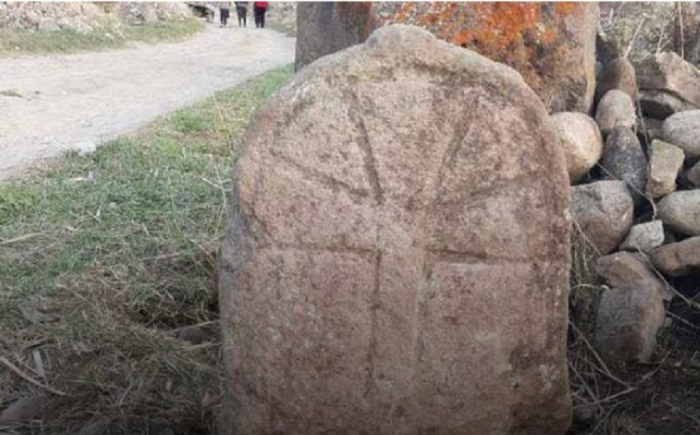 The "standard scheme" of Armenian nationalist claims to foreign lands is beginning to be actively implemented in the region of Samtskhe-Javakheti, where already strong separatist tendencies among the local Armenian population. In the village of Balkho of Akhalkalaki municipality was recent "miraculously" found an alleged "ancient Armenian cross-stone".

The "sensation" was reported by Armenian separatist publication jnews.ge "Khachkar was found in Javakheti, in Balkho village("http://jnews.ge/?p=50348&fbclid=IwAR0Ehdsx2eqFg8nFGsImW--G7PsgAYXtUHFjaRR8wSNFe7ZiIrqVS1w9WXw).
Here is the information about this "miraculous" find:

"In the village of Balkho of Akhalkalaki district a cross stone was found. It was found by two 14-year-old girls in the end of the village, on the road leading to Zak village. According to the initial assessment of photo experts, it was a medieval tombstone.

A few days ago in Balkho village two girls, having noticed a cross-stone, immediately informed their parents about it. After that, the parents carefully dug the cross-stone out of the ground and placed it.

"A cross-stone was found by two 14-year-old girls completely by accident, they reported the discovery to their parents, who took the cross-stone out of the ground. In their opinion, this is not the whole crosshair. We haven't shown it to anyone yet, and now it's standing where it was found," said a Balho villager in a conversation with Jnews.

According to the experts' preliminary explanations, the find is a tombstone. At first glance, the stone looks like a cross-stone from the 7th-8th centuries, but serious research into the monument is needed to establish the date.

I.e. for decades the cross-stone lay on the edge of the village, every day a mass of people passed by it, but nobody paid attention to it. No one "ancient cross-stone" (and this is not a small stone or some kind of coin) "found" it. But now, when Armenian nationalists started to claim Georgian churches on the native Georgian lands - they "found" it! And it immediately dates back to the 7th-8th century!

It is no accident that users of social networks immediately doubted the authenticity of the "find" Here are some of their comments:

"Fairy tales of cross-over from local "aborigines", who were moved from Turkey in the 19th century":

For those who know history - such a "find", if a cross-stone were indeed "ancient" - there could not be such a "find" in Javakheti, since the Armenian population did not appear in Satkhe-Javakheti until 1830.

All the cross-stones that now stand in Armenian settlements were at best dragged from their former settlement sites, the Turkish Erzerum. Some cross-stones were carved out on the spot. But all of them are well known as their sites.

For 190 years that have passed since Armenians settled on this Georgian land there were no events that even a "new" cross-stone could "get lost" or "be forgotten". Not to mention the "ancient" one. Especially on the busy outskirts of the village, near the road, where dozens of people pass every day!
Until 1830, there were no cross-stones in Javakheti, and neither was the Armenian population as such. The Armenian nationalists and separatists in Samtskhe-Javakheti "older" than 1830 simply cannot present any Armenian artifact that is real, not falsified or "dragged". And this does not leave a stone unturned on their concept that "Javakhk" is supposedly an "icon Armenian land".

Hence the desire of Armenian nationalists to first capture and appropriate the ancient Georgian churches located in Samtskhe-Javakheti (as Kumurdo Cathedral), and secondly to flood this Georgian land with allegedly "ancient Armenian" fake Khachkars, "ancient Armenian inscriptions" and the like.

There's nothing new in this. Famous researcher of Georgian cultural heritage Bondo Arveladze notes how Armenian nationalists falsified the inscriptions for appropriation of Georgian churches. And the facts of falsification were noted not only during the mass settlement of Armenians on Georgian lands, which was carried out by the Russian Empire but also in relatively recent times.

This is a well-known case from the 90s of the 20th century (i.e. period of Georgia's independence) described by Giorgi Kiladze: "In summer 1990 a battalion of Georgian police was deployed in the village of Akhkerpi of Marneuli district. The battalion commander received information that someone with a backpack came to the church basilica near the village every morning and remained there until the evening. The commander inquired, went, and saw that an Armenian was conducting excavations at the base of the basilica and on the capital wall was carving the inscription of the builders in Armenian ... This is not the first time that Armenians sent here carve Armenian inscriptions in our ancient Georgian churches.

The work of Armenian falsifiers in throwing and carving "ancient Armenian finds" on Georgian soil is in itself very dangerous for Georgia. Let us remind that when Dashnaks were determining the direction of expansion, "Javakhk" (as Armenian nationalists call Samtskhe-Javakheti) lost only 1 vote to "Artsakh" - Azerbaijan Mountainous Karabagh. Where the claims of Armenian nationalists to another's land were also preceded by long work of falsifiers on the appropriation of Albanian spiritual and cultural heritage.
Today, it seems that Armenian nationalists have seriously decided to "break a corridor to the sea" and already on the fact of the Georgian Abkhazia they have captured through Samtskhe-Javakheti and other Georgian lands. Therefore, "miraculous finds" of allegedly "ancient" cross-stones and other false artifacts that are intended to confirm "Armenian belonging" of Georgian territory cannot but disturb.