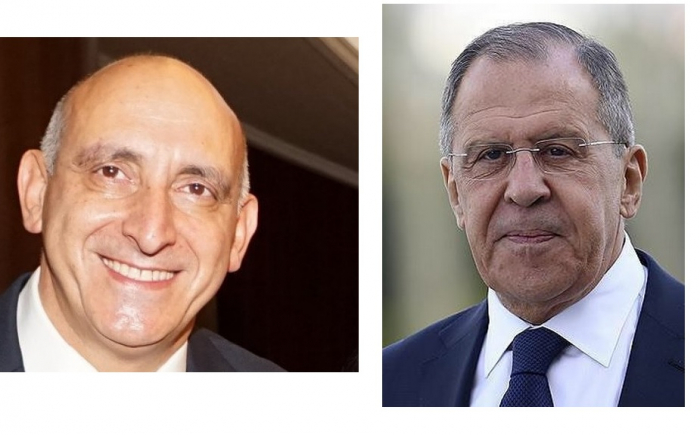 Imagine a situation: 1942. The USSR does not wage war on life, but on death with Nazi Germany. A huge part of the country is occupied by the enemy. And at this time, a relative of Ribbentrop, Minister of Foreign Affairs of the Third Reich, was appointed ambassador of the USSR to the USA.

“Bullshit,” you say. It can not be! But, alas, as the history of today's Georgia shows, such an analogy can be...

Hatred of Georgia, Minister of Foreign Affairs of the Russian Federation Sergey Lavrov, whose real name is Kalantarov or Kalantaryan. It was precisely at the suggestion of Lavrov-Kalantarov that the Russian aggression against Georgia was carried out in August 2008, the Georgian territories of Abkhazia and the Tskhinvali region were occupied and the so-called “independence” of the separatist regimes was recognized.

And today Sergey Lavrov-Kalantarov is doing everything in order to create the problems of Georgia in the international arena. In particular, it is trying to “torpedo” the cooperation of Georgia with its allies and neighbors - Turkey, Azerbaijan, the European Union, and the USA.

The roots of Kalantaryan are from the large Armenian family of Kalantaryan-Zargaryan. It is reported that at the beginning of the 20th century, his grandparents moved to Tbilisi, but were forced to leave it after the Russian Revolution. The family has always maintained close ties with Georgia.

Yanik Kalantaryan is a relative of Sergey Lavrov-Kalantarov, a native of the same Tbilisi-Armenian family of Kalataryans. It is logical to assume that he somehow maintains a relationship with his relative and fellow tribesman. Perhaps acting as a kind of "observer" the latter in Brussels.

Meanwhile, Brussels is not a simple European capital. Here is the NATO headquarters and many governing bodies of the European Union. All Eurointegration and Euro-Atlantic aspirations of Georgia will now be under the "watchful eye" of the Honorary Consul of Georgia in Brussels, Yanik Kalantaryan, a relative of Sergei Lavrov-Kalantarov.

Nouvell d’Armenie writes about appointing Kalantaryan as consul of Georgia. The candidacy of Yanik Kalantaryan took place in February 2020, the appointment was on April 1, but he will officially take office during the reception when the situation in Belgium will be favorable due to the spread of coronavirus.

We draw attention to the fact that since April 2020, Sergey Lavrov-Kalantarov began to somehow “show off” in relation to Georgia and even say something about “restoring diplomatic relations, naturally, without de-occupying the territories.” Now it’s clear why Kalantarov, the Moscow diplomatic relations with Georgia, is needed. To officially maintain close ties with Kalantaryan-Brussels through the Russian Foreign Ministry without any problems. And there is a big risk that they will jointly “work” in this way, in the interests of Russia.

Sergey Lavrov-Kalatarov everywhere in diplomatic posts and the posts of ambassadors of Russia in other countries are trying to appoint tribesmen-Armenians. Including in the key allied states for the Russian Federation, in Venezuela and Iran. And now, does Lavrov appoint diplomats for Georgia too? Since when has Georgia become a "diplomatic colony" of the Kalantarv-Kalantaryan clan?

There is no doubt that Yanik Kalantaryan, like his relative Sergey Lavrov-Kalantarov, is a notorious nationalist. He does everything he can to lobby the EU for the recognition of the mythical “Armenian Genocide,” and naturally does everything to harm Turkey’s interests for any reason.

The question is, why is Georgia an honorary consul in Brussels, which harms the key foreign economic partner of our country, Turkey? It is obvious that he will do everything to harm transit projects involving Turkey, Georgia, and Azerbaijan, on which the prospects for the development of the Georgian economy largely depend.

There are many talented Georgians, true patriots of their country, including those living in Belgium. Among them, you can easily find a person who will gladly and selflessly represent Georgia in Brussels as an honorary consul. But why was it necessary to appoint an Armenian nationalist and relative of the enemy of Georgia to this post? If other appointments are carried out on the same principle, then Georgia may have enormous problems in the international arena.