“Application for falsification” and the danger of the appearance of “Armenian inscriptions” where there was influence of the Georgian Orthodox Church in Ingushetia, Chechnya and Dagestan 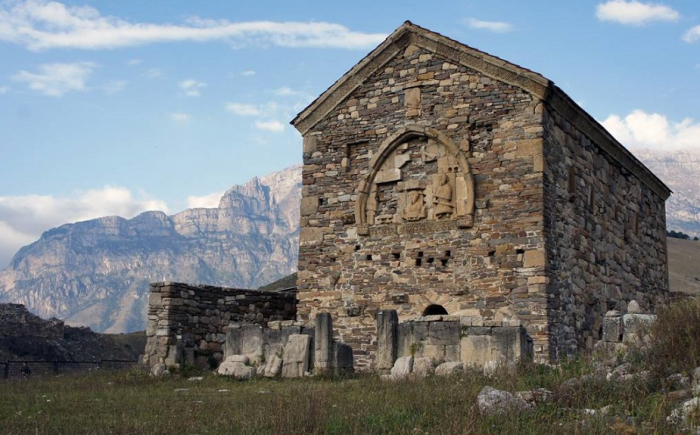 Recently, a popular Russian resource, Rambler, published the material “Vainakh-Christians”: when the Ingush and Chechens were Orthodox” (https://weekend.rambler.ru/read/42304379/?utm_content=rweekend&utm_medium=read_more&utm_source=copylink).

In Chechnya and Ingushetia in connection with the latest events in the republics is increased attention. It is also known that both Chechens, Ingush and Dagestanis became seriously interested in the Christian past of their peoples, especially since there are numerous Christian monuments of Georgian cultural origin on the territory of the republics of the North Caucasus. It is also known that South Dagestan was part of the oldest Christian state - Caucasian Albania.

However, the way the history of Christian heritage in the Caucasus is presented in the aforementioned material cannot but be alarming.

Whose “tradition” is this? If Armenian, then everything is clear. If you listen to the Armenian falsifiers, the Armenians "founded" both Kiev and Moscow, they "baptized Russia" and carried out all the other "great deeds".

Another false pseudo-historical thesis is stated that allegedly "the Albanian church was a subsidiary to the Armenian, but soon became autocephalous."

Fuad Akhundov, head of the foreign media and NGO department of the Presidential Administration of Azerbaijan, presented a book “The reasons about the disappearance of the book of Joseph Orbeli” which contains information about how the history of the Albanian church was completely slandered and falsified.

For many years, this book by J. Orbeli, revealing Armenian historical falsifications, was considered lost, but one copy was found in the archives of St. Petersburg in 2011. Fuad Akhundov notes that thanks to the book of J. Orbeli, it is possible to convincingly prove the fact that the Albanian monuments, especially in the territory of Nagorno-Karabakh, were destroyed and deliberately armenianized.

The inscriptions of the Gandzasar monastery complex, which is located in the Kelbajar region of the Republic of Azerbaijan occupied by Armenia, were subjected to the most serious fraud and destruction. This monastery complex for many centuries was the residence of the patriarchs of the Albanian Apostolic Church. At the beginning of the 19th century, after the abolition of the Albanian Autocephalous Church, all its property, temples, books, archives and congregations were transferred to Echmiadzin or destroyed.

Georgian Armenologist, academician Zaza Aleksidze performed the most accurate translation of the main inscription of the Cathedral of St. John the Baptist in Gandzasar, made by decree of the Albanian Prince Hasan Jalal-Davly in 1240. Due to this, it was possible to establish that the Albanian Catholicos had the highest patriarchal dignity in the Christian world. In the inscription, the title of the Albanian spiritual leader is quite clearly translated: hayrapetuthetnnersisialuanitskatolikosi (during the patriarchate of Nerses, the Catholicos of Alban).

In the article “Vainakh - Christians”: when the Ingush and Chechens were Orthodox,” of course, could not bypass the fact of Georgia’s enormous influence on the spread of Christianity in the North Caucasus. Especially in the heyday of the Georgian kingdom.

“Georgia is consistently strengthening its position in the North Caucasus. Queen Tamara (1166-1213) strengthens the position of the church there. In 1318, the Georgian Patriarch-Catholicos Euthymius III visited parishes in the lands of Vainakhs and Avars - the first known trip of the Georgian First Hierarch to Chechnya, Ingushetia and Gorny Dagestan. The population of these countries at that time was overwhelmingly formally Orthodox, although they retained many of the remnants of paganism that the clergy tried to exalt ...

The decline of Christianity was associated with the adoption of Islam by the Golden Horde, the campaigns of the Central Asian conqueror Timur and the spread of the power of the Ottoman Empire in Transcaucasus. Most of the Vainakhs return to paganism. The 17th century is characterized by a partial revival of Christianity in the region due to the short-term strengthening of Georgia. But the increasingly strong position in the Vainakhs is conquering Islam.

Nevertheless, Christian communities and many churches continued to operate until the middle of the XIX century, almost until the region passed under the authority of Russia. The service was conducted according to the books written in the Old Georgian language. The lack of discoveries of Armenian church writing and graffiti among the Vainakhs does not allow many researchers to say that Christianity was brought here from Caucasian Albania before the 8th century. ”

Thus, the material is compelled to state a fact - there are no finds of the Armenian church writing in the North Caucasus. And to be them there can not, by definition.

But then it is not clear why only the “Armenian finds” should speak about the spread of Christianity in the North Caucasus from Caucasian Albania, which had its own language and writing, does not have anything to do with the Armenians?

There is a great danger that “finds” in the form of falsified and “inserted” stones in ancient temples with supposedly “ancient Armenian inscriptions” will soon appear in the North Caucasus. According to this scheme, Armenians appropriated Albanian and Georgian churches.

After all, in fact, in the North Caucasus, Armenians have become the second largest ethnic group after the Russians. In the Krasnodar and Stavropol Territories, the economy is actually in their hands, and they are already “eyeing” to get in their hands Chechnya, Dagestan and Ingushetia. And for this, it is important for them to “make a claim” to the spread of Christianity in the North Caucasus in past centuries and attribute it to “merit”.

Therefore, the appearance of materials about Christianity in the North Caucasus, where, along with well-known historical facts about the Georgian influence and about Caucasian Albania, for some reason, Armenians and the Armenian Church are mentioned (never related to the North Caucasus). It is quite possible that a “ground” is being prepared for a large-scale “pro-Armenian” falsification of the Christian past of the peoples of the North Caucasus.