Abkhazia cannot survive without Georgia. And the separatists have already begun to understand this. 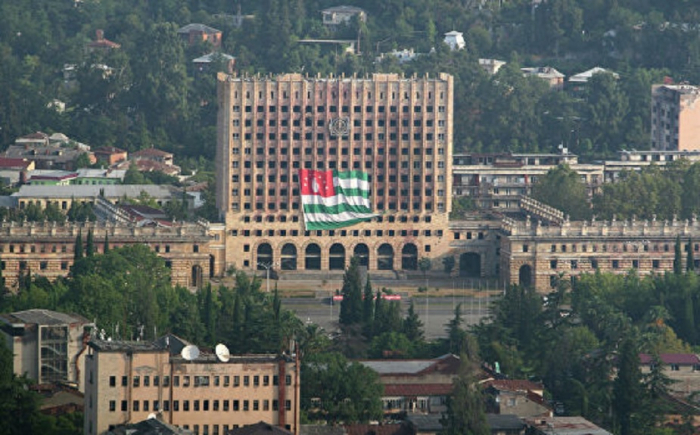 The real situation with the coronavirus epidemic in the separatist territories seems to be much worse than the “official” separatist statistics show.

So, for example, for a long time, the coronavirus was not detected in the occupied Tskhinvas region. For a simple reason - medicine in the separatist territories is absent as a phenomenon. Moreover, both in Abkhazia and in the so-called. "South Ossetia." Because of this, for example, anyone who has a serious illness from Tskhinvali needs to be transported for several hours at least to Vladikavkaz. Many of these "trips" do not stand and die along the way.

With the outbreak of the coronavirus epidemic, no special testing was carried out in Tskhinvali, and therefore it was as if “infected”. And you can even guess why. The authorities of the separatist education in Tskhinvali, instead of taking care of the health of their population on the instructions of the Kremlin propaganda, yelled about the "Lugar laboratory" in Georgia, which allegedly infects everyone with coronavirus. But they didn’t even remember that there was a biological laboratory in the Republic of Armenia and that there was not even a record number of infected in the South Caucasus in Tskhinvali.

When the inhabitants of Tskhinvali began to manifest themselves in large quantities the symptoms of coronavirus and began testing there, in a matter of hours, 23 were found infected. And this is real for 10-15 thousand people of the population of the separatist Tskhivalka region, if not less. After all, the summer period has not yet begun, the Ossetian villages of the Tskhinvali region are empty. They come to life only during the summer months and that’s not all. Life is "warming" unless in Tskhinvali itself and in the ghetto for Georgians called Akhalgori.

Even if we take “official” separatist data on coronavirus, the Tskhinvali region is perhaps the most disadvantaged zone for coronavirus infection in the South Caucasus, along with the Republic of Armenia.

At the same time, the separatist authorities of Abkhazia, realizing that due to the lack of medicine as a phenomenon, they themselves will not be able to fight with the corn virus, from the very beginning secretly turned for help to Georgian doctors. Those who suspected the coronovirus were initially "silently" tried to smuggle through Inguri to the unoccupied territory of Georgia. Despite the officially “closed” demarcation line. That is how the first woman infected on separatist territory was identified, who was transferred to Inguri for treatment on this side and was not included in the separatist statistics.

But help to the population in the separatist territories is needed in another - there is a catastrophic lack of medicines, equipment, protective equipment, etc. Russia, which today has record levels of coronavirus infection, has essentially stopped helping separatists. As a result, one has to rely only on the help of Georgia.

The fact that today the separatists rely more on Georgia’s help than on Russian help can also be concluded from the material published on the Echo of the Caucasus website “Olesya Vartanyan:“ It is necessary to somehow establish cooperation in real conditions” (https://www.ekhokavkaza.com/a/30601546.html?fbclid=IwAR2KLz9g45R1L1mGVQuZaBMYXA-NWjm-SsB_QRosZJR7Lxc-YNOT8NvXMUU).

The material says that the International Crisis Group published the report “Calling COVID-19 in the breakaway regions in the post-Soviet space”. The document describes the situation in South Ossetia, Abkhazia, Donbass, Nagorno-Karabakh and Transnistria due to the threat of the spread of coronavirus. On this topic, an interview was given by an analyst of the International Crisis Group Olesya Vartanyan. Here is an excerpt from this interview:

“O.V .: ... In the post-Soviet space, Abkhazia is a very successful example. The local leadership of Sukhumi was able to organize cooperation with everyone with whom it was possible, regardless of where the offices of these organizations are located - in Tbilisi or abroad, where they come from and in what capacity. Officials in Sukhumi managed to build cooperation with everyone. First of all, this was done in order to help the population. And 20% of the local population are people over 60 years of age, no one else has such indicators in the entire South Caucasus - neither in Nagorno-Karabakh, nor in South Ossetia. The problem lies in the fact that people in the medical sector are employed by the elderly. So if Sukhumi began to resist, set certain conditions, then most likely the doctors who are now at the forefront would face a serious problem. They would not have basic means of protection, and as we see, not only in our region, but also abroad, if the doctor does not have one, he is simply afraid to approach a patient who may have coronavirus. If they (the doctors) became infected, then in fact in two weeks Abkhazia would have remained without doctors.

S.B .: Did Abkhazia begin to seek help in March?

O.V .: If I am not mistaken, official appeals were in early March, but unofficial messages arrived much earlier. Abkhazia was in a transitional period, elections were held there after the resignation of the local de facto president, and in fact the whole problem associated with coronavirus fell on the shoulders of bureaucratic functionaries who are not involved in the formation of politics in everyday life. It turned out that these people are much more effective in terms of building cooperation with international organizations, with Tbilisi, with Moscow. Abkhazia is an example for everyone else”.

It is now becoming clear that in the conditions when Moscow decided to “save” on the regimes in Sukhumi and Tskhinvali, separatist territories cannot survive without Georgia. And this is only the beginning. Indeed, the issue of food shortages in the occupied territories will inevitably become aggravated, where not only medicine, but also agriculture "have ceased to exist". Therefore, the time has come to raise more decisively the question of their de-occupation. At least to prevent a humanitarian catastrophe, which in the event that the current trends of growing problems of the occupying Russia of these lands continue, is inevitable.