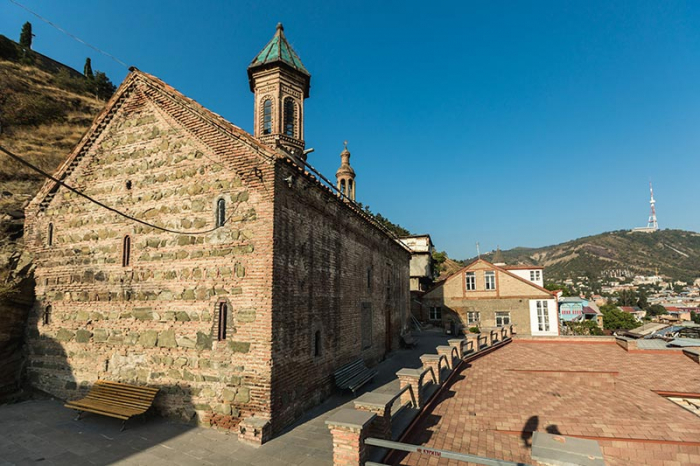 As Prof. M. Dzneladze states, the earliest and the most trustworthy source is the plan of Tbilisi (1735), compiled by Vakhushti Bagrationi, which portrays St George Church of Kldisubani, and its belfry is also visible there. A detached belfry is found only in Georgian churches. In Armenian churches, it is not detached; it is included in a church construction. Apparently, when later the church was embezzled and re-constructed by Armenians, they built the belfry in accordance with the Armenian church construction law.

It can be inferred that, in 1735 (if not earlier), St George Church of Kldisubani was Georgian. As the references by Mose Janashvili and Davit Karichashvili, they almost identically repeat the words of Eg. Ioseliani who does not cite any source. Thus, they may not be accepted as doubtless scientific documents.
I should like to pay special attention to what P. Muradyan says about St George Church of Kldisubani: he says that, in the Armenian community of Tbilisi, it was referred to as “khikhoi zham.” He cites no written or oral sources and provides no definition.

If we look at the past of Tbilisi, ethnic Georgians actually had such an expression in use; local residents referred to settler from western Georgia as “khikho” owing to their provincial speech. It is still used sometimes. Due to everyday contacts, the word was adopted by local Armenians. Why residents of Tbilisi named St George Church of Kldisubani as “khikho’s church,” can be explained in the following way: Kldisubani was one of the parts of the citadel and a place of royal residence at the end of the medieval centuries. The residence moved here after Agha Muhammad Khan Qajar ravaged Tbilisi (1795). In the 1800 plan of Tbilisi, therritory, numbered as 59, is referred to “a current place of residence of His Majesty, the King.” Initially, predominantly ethnic Georgians settled around the new royal residence. Most of them were ethnic Georgians who had come to work. After having settled there, naturally enough, they visited the Georgian church after St George located in Kldisubani. This is why local Georgians referred to the church as belonging to “khikhos.” Following them, ethnic Armenians referred to it in the same way.
Based on the analyses of the Georgian and Armenian written sources about St Georgian Church of Kldisubani, it can be concluded: St Georgian Church of Kldisubani was Georgian; however, it was re-constructed several times. It was evidenced by the materials discovered as a result of the archeological excavations conducted by Prof. M. Dzneladze in 2007. From the architectural point of view, this church was studied by the art historian Vardiko Arabuli; it was restored by Nodar Mindorashvili. Prof. M. Dzneladze conducted his archeological excavation in two stages: at the initial one, he cleaned it from the construction and household remains, having been accumulated for decades. Following that, they were able to view the facility of the 12th-13th centuries, two grave fields belonging to the previous period of the 12th-13th cc. settlement.

At the second stage, the whole interior of the church became the site of archeological excavations. A man was buried in one of the graves; on the northern part of its tombstone, there was a Georgian Mkhedruli inscription saying: “Commend, Lord, the grave of Mizanat Melkua Who reads it, wish him be forgiven May God forgive you too. Amen.

There are the graves of Mizana’s wife and their young son Giorgi there. Prof. M. Dzneladze assumes that Mizana and his wife, buried in the church, may have been parents of the renovator, the ktitor of the church restored in 1753. In that year, the church was not constructed, as the inscription states, but it was innovated and expanded. In order to substantiate the viewpoint, Dzneladze refers to Academician V. Beridze: St George Church of Kldisubani in Tbilisi, as it is presently, does not belong to the times of Vakhushti Bagrationi; however, salient signs of re-construction attest that there was a re-construction before it; probably, the church has been re-constructed not only once.

Based on the study of the archeological data, Prof. M. Dzneladze concludes: the presently accepted date (16th-18th cc.) of St George Church of Kldisubani in Tbilisi has moved back to the 5th-7th cc. The church should eb viewed as part os the system of churches, founded in the capital by Vakhtang Gorgasali and his son Dachi. This is attested by a small hall-like facility belonging to the initial period (5th-7th cc.).

It should be emphasized that, for some time, St George Church of Kldisubani in Tbilisi was embezzled by Armenians, but that does not mean that initially it was Armenian; this was once again proved as a result of the archeological excavations by Prof. M. Dzneladze.

I should once again note about the well-known habit of Armenian clerics. It was embezzlement of churches not belonging to them. This disease was the marrow in their bones, so that, as already mentioned, they even attempted to embezzle the Church of the Holy Sepulchre by malicious means. With a view to such unprecedented profanity, is it surprising that Ejmiatsin made the embezzlement of Georgian churches as its foreign policy. St George Church of Kldisubani in Tbilisi became a temporary victim of this aggressive policy. Justice was served, and Georgian believers are able to hear Georgian liturgy and religious hymns St George Church of Kldisubani.

The Georgian church of St George in Kldisubani is number 6 in Bishop Mirzakhanyan’s list of the churches to be handed over to the Armenian side which, to put it mildly, is an outcome of misunderstanding.