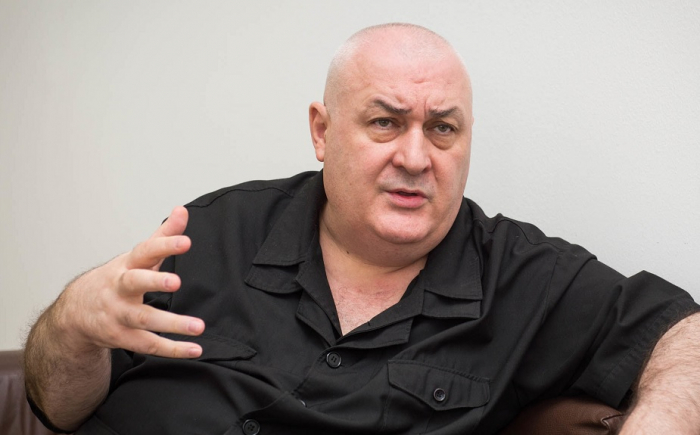 There is one more confirmation that the leaders of the Alliance of Patriots party led by David Tarkhan Mouravi are not Georgian “patriots”, but they are the most outspoken guides of imperial ambitions in the South Caucasus - simply speaking the fifth column.

Recall that David-Tarkhan Mouravi at that time already distinguished himself with pro-Armenian Turkophobic statements. In particular, declaring the most important strategic partners of Georgia, Azerbaijan and Turkey as occupants. The Alliance of Patriots Party is also actively pursuing pro-Armenian policies in Georgia, demanding that the so-called mythical “Armenian genocide” be recognized. Thus, in fact, he did not give a damn for the memory of hundreds of thousands of Georgians - Adjarians and Lazs - victims of the real genocide, which was organized in 1914-1917 by armenian Dashnak militants. And now, the same David Tarkhan-Mouravi, preferred to oblivion the memory of tens of thousands of Georgians, victims of the genocide in Abkhazia in 1992-1993, and hundreds of thousands of Georgian refugees from Abkhazia.

On April 28, 2020, the Georgian television channel Lens (https://www.obieqtivi.info/) published a story with the participation of the leaders of the Alliance of Patriots of Georgia political party David Tarkhan-Mauravi and Vakhtang Kolbaia, in which they unequivocally stated that it is necessary to recognize the “realities” and to refuse to return Abkhazia and the Tskhinvali region to Georgia, and to be ready to establish equal relations with the Abkhaz separatists. (https://www.youtube.com/watch?v=zdXE4Xm4or8&feature=youtu.be).

Naturally, David Tarkhan-Mouravi, who is so worried about “the victims of the 1915 genocide” did not say a word in this program about the real victims of the atrocities of his “friends” from the Baghramyan battalion in Sukhumi in 1993, nor about the hundreds of refugee Georgians frozen on mountain passes, nor about the houses and apartments of Georgians captured as “trophies” many of whom were brutally murdered. Nothing was said to them about the need to return the Georgian refugee to their homes, about the resolutions of the UN General Assembly on this issue, which Armenia regularly opposed. These questions do not exist for Mr. David Tarkhan-Mouravi.

But the leader of the “Alliance of Patriots” word for word repeated the theses of the worst enemy of Georgia and the Armenian nationalist, Russian Foreign Minister Sergei Lavrov-Kalantarov, demanding that the Georgians “recognize the realities”. Particularly David Tarkhan Mouravi emphasized that the Georgians must come to terms with the fact that neither Sukhumi nor Tskhinvali is controlled by Georgia and Abkhazia and South Ossetia will never exist with autonomies within Georgia.

Those. with “realities” when murderers and marauders, including those from the so-beloved Mr. Tarhan-Mouravi “long-suffering genocide people”, own the housing of the Georgians killed and expelled by them, the leader of the “Alliance of Patriots” offers Georgia to simply put up with it. As with that, it seems that his friends, Armenian nationalists, are striving to quickly populate Abkhazia exclusively with their fellow tribesmen, having bought up “trophy” housing, which so far belongs to the Abkhaz separatists.

The question is, why should the Georgians “dialogue”, as a result of which they will forever lose the right to even come to Abkhazia to the graves of their near and dear ones, will accept the impunity of the killers and looters and help them to “legitimize” their possession of the loot? Why is there a “dialogue" whose goal is for Georgia to recognize as "legitimate" ethnic cleansing and the loss of its territories?

But at the same time, at the same time, David Tarkhan Mouravi believes that Georgia should recognize the mythical "Armenian genocide" and quarrel forever with Turkey and Azerbaijan, finding themselves in economic isolation. And face to face in the face of the "well-wishers", who have already taken away 20% of its territory from Georgia and dream of completely dismembering and destroying the Georgian state. It is difficult to imagine more hostile to Georgia and the Georgian people “patriots”.

Strange as it is, David Tarkhan Mouravi has not yet called for “to recognize the realities” and to give the Georgian region of Samtskhe-Javakheti to the alleged “genocide-affected” Armenian nationalists and separatists. But apparently, he simply expects the same massacre that happened in Sukhumi to happen there. The Armenian separatists in Samtskhe-Javakheti are actively preparing for it, even recently they erected a pompous monument to the separatist militant Mikhail Avagyan.

David Tarkhan-Mouravi suggests reconciling himself to the fact that neither Abkhazia nor Tskhinvali will ever return to Georgia and will not be autonomies, but at the same time calls for "dialogue" with the separatists on equal terms, i.e. to their official recognition, but in fact to the surrender of Georgia.