"Genocide" failure of the Armenian lobby in Ukraine 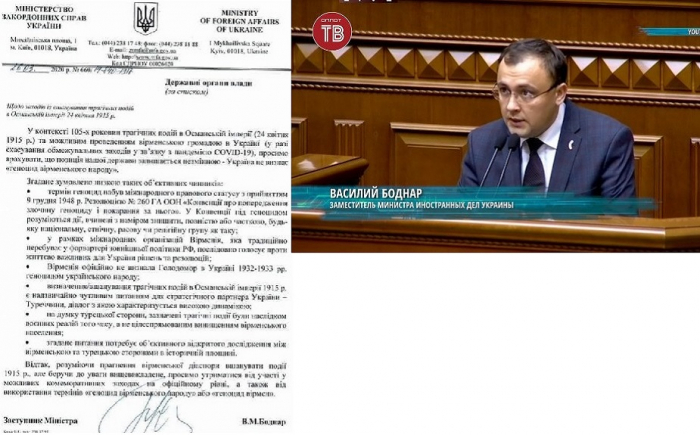 If in Russia the Armenian lobby, led by the prime minister, the semi-Armenian Mikhail Mishustny, is successfully building a “digital dictator” while rapidly ruining the Russian economy and the unity of the country, in Ukraine in recent days, Armenian nationalists have been made nervous. The main Armenian myth about the so-called "genocide of 1915" was hit.

On the eve, a number of independent Ukrainian politicians eloquently made the Armenian lobby understand that "Ukraine is not Armenia."

It all started with the fact that the Deputy Minister of Foreign Affairs of Ukraine Vasily Bodnar addressed a letter to the country's officials on March 26, 2020, urging them to abandon the use of the term “Armenian Genocide”. 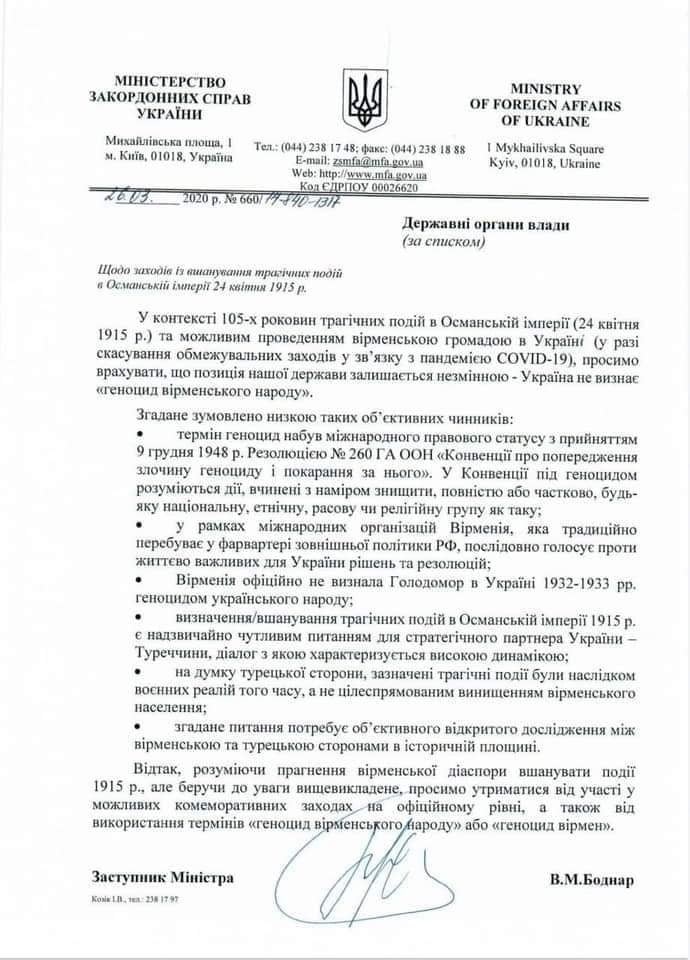 In his letter, Bodnar stated that Ukraine would not recognize the so-called "genocide of the Armenian people" (quoted in quotation marks in the original letter!), And used the expression "tragic events of April 24, 1915 in the Ottoman Empire."

According to Vasily Bodnar, the events that occurred with the Armenian population of the Ottoman Empire do not fall within the definition of the term “genocide” adopted by the UN on December 9, 1948 (actions committed with the intention to destroy, in whole or in part, any national, ethnic, racial or a religious group as such).

Also in substantiating the position of Ukraine, the deputy foreign minister declares that Armenia “is in the wake of Russia's foreign policy” and in international organizations votes against resolutions that are vital for Ukraine.

Vasily Bodnar also notes that the so-called “Armenian genocide” is sensitive for the strategic partner of Ukraine - Turkey, and historians must solve it.

It is clear that this balanced decision of the Deputy Foreign Minister of Ukraine caused real hysteria in the Armenian media and among the powerful Armenian community of Russia. In Yerevan, they were terribly indignant, and the Armenian politician, vice-mayor of the economic development of the city of Artik of the Shirak region of Armenia, Boris Avakyan, came up with an initiative for Armenia to recognize Crimea as the sovereign territory of Russia. With such an appeal, he addressed the Armenian Foreign Minister Zohrab Mnatsakanyan and the Standing Committee on Foreign Relations of the Armenian Parliament.

Obviously, before the Armenian media trumpeted the position of the Ministry of Foreign Affairs of Ukraine “on the genocide issue”, the main Kremlin propagandist Margarita Simonyan found out about it. She burst into yet another anti-Ukrainian tweet. Simonyan demanded a review of the borders of Ukraine and the occupation of new Ukrainian territories of the Russian Federation "in addition" to the Crimea.

“We are reviewing“ Liquidation” in isolation. What a brilliant series. Odessa would also be returned, of course, wrote Simonyan.

“Everything is real from the historical perspective,” Simonyan said in an interview with the Federal News Agency in continuation of this topic. - We see that the absolute helplessness of the main and richest power in the world in the face of the virus has become a reality. Could you imagine this a year ago? And Odessa was and is in the Russian semantic space, it has been for centuries. Of course, it must be kept in it”.

“I say: from the historical perspective, everything is possible. We would not have believed in Crimea seven years ago, Simonyan explained.