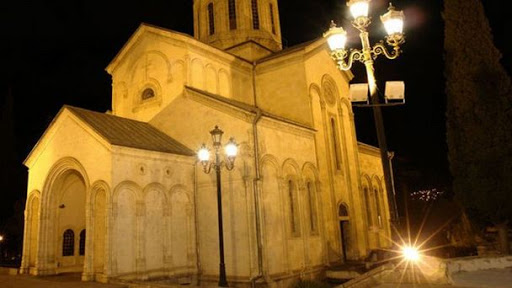 St George Church in Kldisubani, Tbilisi, is located in one of the oldest quarters of the city, in the territory of Kala, between St Nikolaos Church of the citadel and the church of Upper Betlemi; Betlemi Street 7.

There are the following available sources about St George Church in Kldisubani: according to Pl. Ioseliani, “the church was built by a certain Armenian monk by his own means.”

Mose Janashvili refers to St George Church in Kldisubani as Armenian “Karapin Surb Gevorg” (‘St George Church of the Rock’); the date of its construction is not indicated.

According to D. Karichashvili, “St George Church of Kldisubani in the south of Tbilisi is constructed upon a rock; it is a church with a small dome, it is beautiful, where a wondermaking relic is kept. St George Church was constructed in 1600 by a certain Armenian monk by his ownmeans; now it is roofed with tiles and called Kldisubani Church.”

Unfortunately, neither he cites any source. L. Melikset-begi detected this reference in D. Karichashvili’s archive and published it without any critical discussion or inspection (Chveni Metsniereba, 1923, 2-3). It should also be noted that D. Karichashvili almost always repeats Eg. Ioseliani.

Prof. M. Dzneladze states that the earliest reference about St George Church of Kldisubani is found in Vakhushti Bagrationi’s book. The plan of Tbilisi (1735), compiled by him, vividly portrays a small basilica in Kldisubani, to the west side of it one can see a belfry. Above the window, there is a bilingual – Georgian and Armenian inscription, telling about the date of its reconstruction and renovation: 1441. The author believes that, by 1735, the church belonged to the Georgian Orthodox Christian Diocese, and, that was why, he did not refer to it as Armenian.

There are no more Georgian sources about St George Church of Kldisubani.
The Georgian inscription of the church was dated by M. Brosset as back to 1756.

The reference is commented by P. Muradyan in the following way: the Gospel, presented by St George Church in Varag, reached Tbilisi in 1753 and was placed at the newly-built church of St George in Kldisubani.

I should like to note that the comment is groundless as far as it is unbelievable that it took the Armenian Gospel more than two decades to reach Tbilisi. Doubts are intensified owing to the fact that P. Muradyan does not cite any source to attest this. Hence, this leads me to the idea that it is a fraud committed by the compiler of the list, and nothing else.

P. Muradyan’s “activities” were aimed at “detecting” an Armenian trace in any Georgian domain and then, by means of exaggerations, at displaying that Georgians were not likely to have had either history or literature or architecture. One of such examples is the Holy Cross Church of Mtskheta which was declared as Armenian by him. It was not suffiecint for him, and assumed “Kldisubani” as a Georgian translation of the Armenian place-name. in his opinion, initially its name was “karapi tagh,” which later was translated into Georgian as “kldis ubani” (‘rock quarter’).

The place-name in question could by no means undergo such a transformation: in ancient Georgian sources, it has been referred to as “kldis ubani” (‘rock quarter’), named by the indigenous Georgian population due to its rocky landscape. Armenians, having settled here later, translated the already existing place-name and called it “Karapi tagh” (karap ‘rock’ and tagh ‘quarter’). This is the natural way of the development of the name.