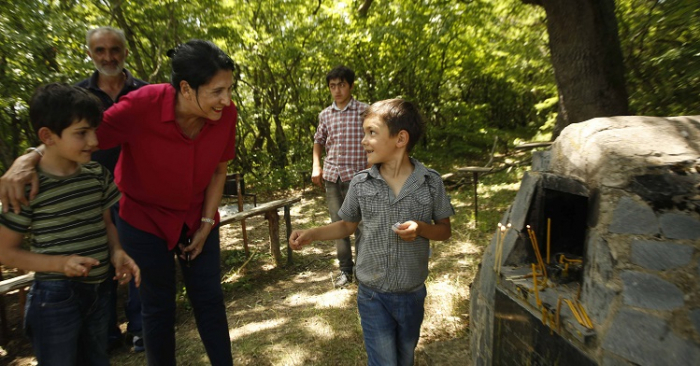 Georgian President Salome Zurabishvili has visited the village of Gremiskhevi to celebrate the traditional Georgian-Ossetian holiday ‘Tijroba’ with local residents.

She expressed her regret to see the village population is no longer allowed to visit a holy site located across the occupation line.

"The feast is always celebrated on day following Whit Sunday which unified Georgians and Ossetians for centuries,” Zurabishvili said.

"Salome Zurabishvili said no one can break the tradition of Georgians and Ossetians living together in love and peace.

I have come here to show that the [occupation] line does not exist, it is artificial,” she added.

President Zurabishvili said the village road should be repaired adding the population should never have to leave the area.

"The road...means that the state cares for all of us, and for us to [to be able to go to the holy site up there] and for the population not to be separated”, she stated.

The village of Gremiskhevi is located in the vicinity of the Russia-occupied Tskhinvali region.