“Quarantine” seizure of territory: The Russian Federation “ascribed” to itself a part of occupied Abkhazia 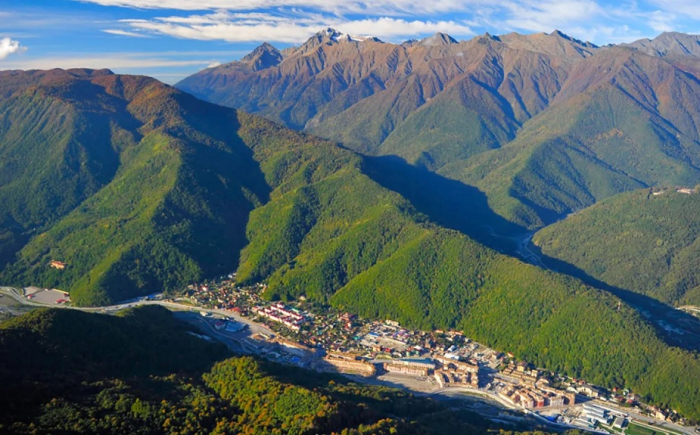 Out of the guise of an almost worldwide coronavirus panic, the authorities of Russia occupying Georgian Abkhazia decided to "round off" the territory of the Krasnodar Territory of the Russian Federation adjacent to it. More precisely, there has been an “increment” of the zone of one of the most expensive Russian resorts - the Krasnaya Polyana ski resort in the Greater Sochi region due to the internationally recognized territory of Georgia. At the same time, the quarantine introduced in the same Krasnodar Territory did not prevent this lawlessness.

For those who understand what this is, it is really a piece of land worth millions of dollars. It’s not a secret to anyone that the cost of land in the most “prestigious” places of Greater Sochi is comparable to the cost of land in the city of Moscow. Someone "laid eyes" on Georgian lands, which formally, from the point of view of the same leadership of the Russian Federation, are part of the "independent" separatist Abkhazia, but are actually occupied. And he decided to put them into circulation in their interests.

The fact is that the current status of occupied Abkhazia from the point of view of international law is "suspended". Here before de-occupation, in principle, no serious investment projects are possible in the so-called "Independent" Abkhazia, which is recognized only as illegally occupying these Georgian territories, by Russia, and by a couple of international outcasts, as well as de facto Armenia, through the puppet separatist so-called "NKR".

Firstly, no one will give loans or serious financing at the international level to investment projects in the occupied territory of Abkhazia, it will be impossible to “legitimize” them, and in the future, it will be possible to get sanctions in general. In addition, even if the land sale market in separatist Abkhazia is launched (as the influential Armenian lobby wants), all the same, not a single transaction from the point of view of international law will be recognized as valid.

It is another matter if the land is formally formalized as “Russian”. The Russian Federation, an internationally recognized state, large international companies participate in investment projects on its territory without problems and usually do not have any problems.

Of course, Georgia may challenge the use of this land in a judicial proceeding. But the fact of the matter is that without official delimitation and demarcation of the border, proving its Georgian “affiliation” in court will be problematic. But the Russian Federation deliberately blocks this process, continuing the occupation.

While lawsuits are going on, land underinvestment projects can be considered “Russian”. It turns out a "loophole," which unscrupulous businessmen can use to make money on the use of Georgian land. Considering that 72% of the population adjacent to the territory of occupied Georgian Abkhazia are ethnic Armenians, it is clear businessmen of what nationality decided to “crank up the operation” with illegally seized Georgian lands.

As a result, in order to increase the “potentially investment-attractive lands”, the FEDERAL SECURITY SERVICE of Russia arbitrarily changed the borders of the border zone on the territory of the Krasnodar Territory. The stated goal is “the development of the tourism industry in the region and the strengthening of border security”.

“On the border of the Russian-Abkhaz border, the border zone has been defined within the borders of the Nizhny Novgorod region of the Adler region of Sochi and has been reduced taking into account the development of the Krasnaya Polyana ski resort,” the FEDERAL SECURITY SERVICE press service for the Krasnodar Territory said in a statement.

Moreover, this district also includes the high-mountain village of Aibga, divided in two, one part of it is on the Russian side, and the other on the Georgian side, in Abkhazia. Earlier, part of this settlement was already illegally entered into the Rosreestr (Russian registry) base as a territory of the Russian Federation. According to the blog cyxymu.info, according to the results of the next redistribution of borders, one more piece of land came under Moscow control.

According to cyxymu.info, the site number 23:49:0513001:37 does not border Russia at all and is completely located on the territory of Abkhazia. But Rosreestr still considers it to be the territory of the Russian Federation: “Krasnodar Territory, Sochi, Adler, v. Aibga, as indicated on his card.”
To comment the information that Russia had changed the borders of the occupied Georgian Abkhazia in the village of Aibga was forced the so-called “Foreign Minister” of the separatist Abkhazia Daur Kove- “This information was distributed on the website of Rosreestr. Now circumstances are being clarified how the information was distributed in Rosreestr, and, I think, the Rosreestr will delete it in the very near future,” said Cove.

Actually, you need to remind Mr. Kove that the cost of land in the area of the same village of Aigba, but on Russian territory is such that he may not have enough money to buy back the land where he will be buried. However, they can “bury” it both for free and very quickly. If he still does not understand who his master is and on the path of whose interests he becomes.

So, most likely Daur Kove "got excited", wanting to pose as a "patriot". After all, the authorities of puppet Abkhazia in the face of the Kremlin “curators” are absolutely powerless and defenseless. Now the resonance with the impudent movement of the border by Russia has received only because they were outraged by the Georgian public.

But really, alas, Georgia so far neither controls the village of Aigba nor the border along the Psou River. Therefore, neighboring Russia cannot prevent the annexation of the lands of Georgian Abkhazia by neighboring Russia. This means that there is a high probability that this process will continue further, especially since the occupiers and real masters of Abkhazia, Armenian nationalists will always find a way to "put in place", who think too much of themselves as puppets in the separatist authorities.