Pashinyan remembered the “Brest Peace” and the “Armenian Javakhk” 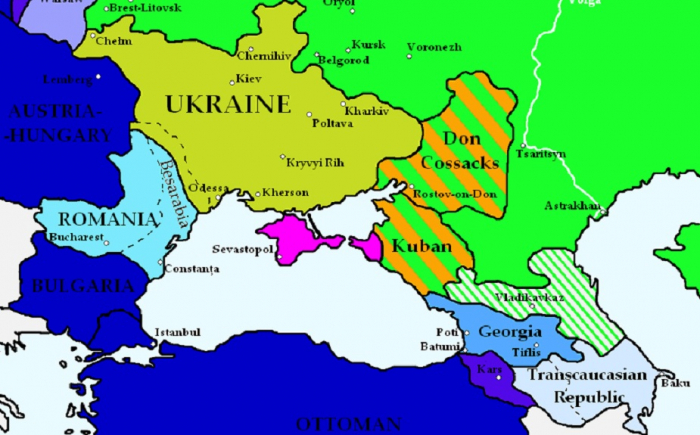 Claims on foreign lands, including on Eastern Turkey (in the terminology of Armenian nationalists “western Armenia”, and Georgian Samtskhe-Javakheti (“Javakhk” in the same terminology) turned into an obsession with fixation in Armenia. There is, perhaps, not a single international event so that Armenian nationalists do not recall these claims, even if it doesn’t concern them at all.

It would seem that the OPEC + oil deal is related to the Armenian territorial claims, where the main oil producers in the world have agreed on some reduction in production volumes in order to stop the fall in prices. But the publication lragir.am, close to Nikol Pashinyan, along with overt gloating over the obvious weakening of Russia's position in the international oil market, again recalled these claims.

By the way, the gloating over the Russian defeats “on the oil front” looks a little strange, given that Russia feeds Armenia, supplies energy, and defends. She is, figuratively speaking, the “nurse” of the Yerevan regime that has long betrayed Moscow.

Elementary logic suggests that the greater the economic problems of Russia, the more difficult it will be to satisfy the incredible demands of Armenia. It may happen that the flow of help will stop altogether.

But in Yerevan, however, the problems of the Russian "breadwinners and benefactors" are rejoiced. And they remember the defeats and losses of Russia, more than 100 years ago, and again, in the vein of Armenian territorial claims to the neighbors.

“The new OPEC + oil deal has already been called the new Brest Peace for Russia. Experts unanimously say that Russia had to agree to humiliating conditions in order to avoid a complete catastrophe and zeroing oil prices...

In 1918, the RSFSR, led by the Bolsheviks, made a deal with Germany and left the war, in exchange, as they say, for big money from Germany. It was a colossal sum, in exchange for which Lenin and the rest agreed to give Belarus, Ukraine, the Baltic states, as well as withdraw troops from Anatolia and the Armenian regions of the Ottoman Empire. After a year and a half, the Brest Peace was denounced, and the sovereignty of the former colonies began.
Moscow was able to “return” Belarus, Ukraine, and even, after 20 years, the Baltic states, which it later lost in 1991. But Russia never managed to return to Anatolia. The Brest peace, in fact, still operates today, at least in part of the Armenian lands. The “Brest Peace” is a symbol of the defeat of Russia, its corrupt policy, primarily in the Armenian issue.

Until Russia eliminates the consequences of a shameful conspiracy with Turkey, the world will periodically put it in a shameful position. Today for oil, tomorrow it may be a biological or another attack. They will not reckon with Moscow as a full-fledged sovereign power, as long as it bears the sin of sharing the Armenian lands with Turkey.

For the past 12 years, which historiography has already called the “second collapse of the USSR”, Russia has tried to maintain at least its nominal presence in the former colonies. But each time she received blows under her breath from "sworn friends" because she could not reconcile with the right of other peoples to sovereignty.

In accordance with the "Brest Peace", Russia controlled the Sovietized part of the Armenian lands, and Turkey - the rest. After the collapse of the USSR in 1991, Russia retained a military presence in Georgia, Armenia, and Azerbaijan.

But in 2008, a few months before the August Russian-Georgian war, the Russian base was withdrawn from Armenian Javakhk. In 2012, Azerbaijan achieved the withdrawal of the Russian LRS from Gabala.

Russia cannot but understand that from the "Brest Peace", in fact, it only "remained" the Gyumri base. ”The shame of the“ Brest Peace ”can be washed away only by establishing horizontal relations with sovereign neighbors.”

Here again, we see the desire of the Pashinyan regime to involve Russia at any cost in the process of "redistribution of borders" in Armenian interests. There is also clear blackmail by the fate of the base in Gyumri (although this base generally exists not so much in Russian so much in Armenian interests). And this despite the fact that it is precise because of the obvious wrecking of the Armenian lobby in Moscow (Mishustin, Kalantarov and others like them) that Russia suffers one after another economic and political defeats.

Nevertheless, these defeats are used as an occasion for blackmailing Russia. Moscow is hinted in plain text: either it “blows up” the region and begins to seize foreign lands for Armenia, or it is threatened with new punishments and new villains from the Armenian lobby, which seems to consciously work for the enemies of Russia and is doing everything to make Russia as good as possible worse.

Otherwise, how to explain the words: “Until Russia has eliminated the consequences of a shameful conspiracy with Turkey, the world will periodically put it in a shameful position. Today, for oil, tomorrow it may be a biological or another attack. ” Is the coronavirus epidemic in the Russian Federation (in many ways a biological attack) a “revenge” because Moscow does not want to take away Georgian and Turkish lands and “give” them to Armenia?