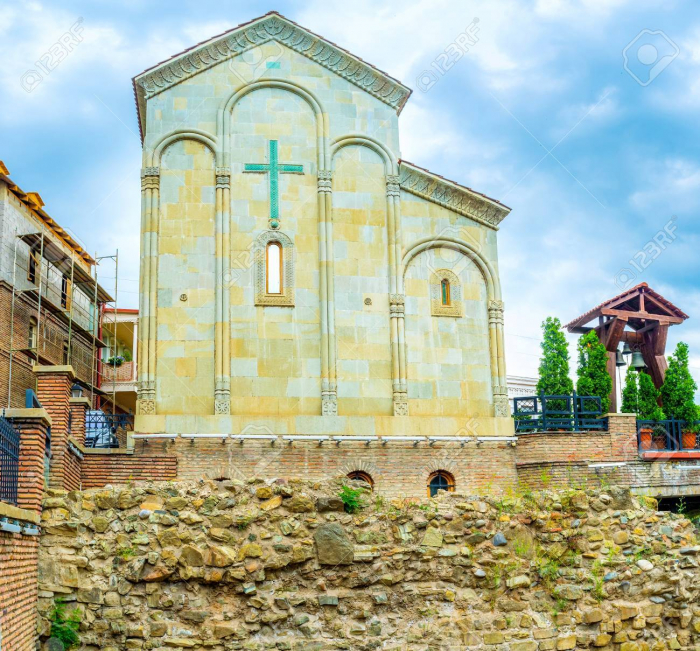 Thus, Georgian scholars accept the standpoint that St Forty Martyrs Church in Tbilisi was built in the 5th c.

The discussed written references about St Forty Martyrs of Sebaste Church in Tbilisi correspond to the materials acquired as a result of the archeological excavations of the church. M. Dzneladze should be praised for having carried out large-scale and labor-consuming works. At the very first stage of the excavations, remnants of the facilities, belonging to the epoch of Vakhtang Gorgasali (5th-6th cc.) and to other periods, were found in the territories of the citadel wall and of the church. This is a factual confirmation that St Forty Martyrs of Sebaste Church existed in those centuries.

The archeological excavations demonstrated that initially, during the Arab invasion, the church functioned as a small chapel, but, in 853, Bugha al-Kabir destroyed Tbilisi including the small chapel. In the following period, Tbilisi suffered hard times. In the 1060s-1070s, there was a single functional Christian church (according to Al-Hussein). In Prof. M. Dzneladze’s opinion, before David the Builder regains Tbilisi (1122), St Forty Martyrs of Sebaste Church was destroyed and was not functional. The scholar assumes that the church was re-built either under his rule or that of Demetre, his son.
Fragments of the wall paintings, belonging to the 12th-13th cc., were discovered in the former church. One of them depicts the letter “დ” of the old Georgian alphabet. In Prof. V. Silogava’s opinion, it is dated as belonging to the 12th-13th cc. Wall paintings and the Georgian inscription are additional proofs of the fact that it was Chalcedonian-Byzantine. Wall painting is totally unacceptable for the Armenian Church from the dogmatic point of view. “Most of the Armenian churches lack it.” It is also uncustomary to arrange grave fields in an Armenian Monophysite church.

In the 14th c., Tamerlane invaded Georgia eight times and barbarously “destroyed all the fortresses and churches.” St Forty Martyrs of Sebaste Church in Tbilisi would hardly survive.

St Forty Martyrs of Sebaste Church was built for the fourth time under King Alexandre I (1425-1440).

There is an interesting reference according to which King George VIII authorized a strange chapel, a cemetery, a palace, and St Forty Martyrs Church. This is another proof that the Georgian church of St Forty Martyrs is concerned and not an Armenian one.

I believe that this argument is weak; more likely, Vakhushti missed it. In his description of quarters of Tbilisi based on the 18th c, documents, Mamisa Berdznishvili states that “a small fortress chapel after Archangel” was included in the territory of the fortress quarter. -

By the annexation of Georgia by Russia (1801), St Forty Martyrs of Sebaste Church was destroyed by Agha Muhammad Khan Qajar (1795). In the 19th c., owing to the Russian authorities, Armenians embezzled and re-constructed it and “it was rebuilt by Armenians of Tiflis.”

Finally, it should be necessarily mentioned that, near St Forty Martyrs of Sebaste Church, Prof. Dzneladze discovered a stele with the inscription which was deciphered by Prof. T. Jojua: “This cross for prayer.” It is dated back to the 7th-8th cc.

The significance of the stele and the inscription is rather great. It confirms that, in those centuries, St Forty Martyrs of Sebaste Church was located in the Georgian environment, thus rejecting some Armenian scholars’ opposite claims.

Prof. I. Izoria studied St Forty Martyrs of Sebaste Church within the typological framework. With a view to architectural aspects, he compared the church with other both in Georgia and abroad, and sets forth the following approach: based on the analysis and discussions of numerous Georgian scholars, Armenian Monophysite churches, constructed in Georgia, reflects Georgian architectural traditions; to support the approach, he refers to the planning of Surb Gevorg Church which should be viewed as a monument related to the 15th c. the layer of St Forty Martyrs of Sebaste Church.

Prof. I. Izoria’s approach is essential and acceptable; however, it should also be considered that initially, Surb Gevorg Church was Georgian, later, in the 13th c., it was repossessed and reconstructed by Armenians. Therefore, it apparently preserves a lot of traces of Georgian architecture.

St Forty Martyrs of Sebaste Church in Tbilisi was re-built in the 19th c. In 1925, it was exploded and destroyed by Bolshevik atheists.

S. Karapetyan’s behavior, which is beyond personal and scientific ethics, will not be surpirising if we remember unprecedented sacrilege, committed by Armenian clerics: they burnt the Church of the Holy Sepulchre in Jerusalem in order to reconstruct and repossess it.