How the Armenian lobby spreads the coronavirus? 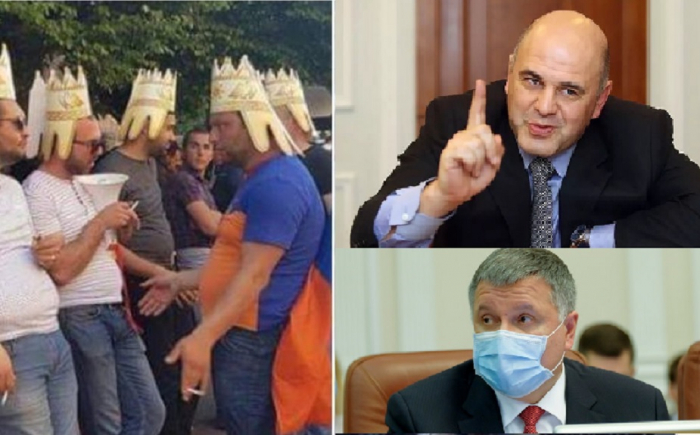 Recently, the Central Bank of Armenia officially announced plans to gradually replace the banknotes in circulation with new ones in order to limit the spread of the new type of coronavirus (COVID-19) and advised people not to use cash if possible. An interesting opinion on this subject was expressed by the doctor of economic sciences, professor, chairman of the “Russian Economic Society named after S.F. Sharapov” Valentin Katasonov.

“Armenia is used as a platform. Two countries have already stated that cash is the carrier of the coronavirus, therefore measures are being taken to drastically reduce the use of cash. China has already taken concrete steps in this direction. And Armenia has not yet taken practical steps, but the statements of Armenian experts are relayed to the whole world. I have repeatedly told who and why should I switch to cashless payments. Throughout the world, there has been a trend of crowding out cash, various arguments are used to achieve this, including the argument that paper money is the carrier of infections. Previously, this argument was in 20th place, now it has been moved to first places,” said Valentin Katasonov.

The economist believes that the abolition of cash is one of the main points in the plans of globalists "to establish total control over people." And, as we see, it was decided to start the implementation of this plan with Armenia.

Meanwhile, in Armenia itself, despite the state of emergency, the number of people infected with coronavirus far exceeds the number of people infected in Georgia and Azerbaijan together (as of March 29 - 424). It is also interesting that the “high-ranking ethnic Armenians in other countries who are responsible for limiting the epidemic” make such decisions that only epidemics contribute.

So in Ukraine, the omnipotent Interior Minister Arsen Avakov seems to be doing everything for the coronavirus to spread throughout the country as quickly as possible. Otherwise, how can one assess his calls to hundreds of thousands of Ukrainians to return to their country as soon as possible from same Europe infected with the coronavirus, without providing basic preventive measures at the border?

The last days before the border was closed, a real nightmare was happening at the entrance to Ukraine. The people stood in many kilometers of lines entering the country to the full packed buses and minibusses. How many people got coronaviruses in conditions of such crowding is hard to imagine.

On the Ukrainian side, no one particularly tested them, and people were sent home without any quarantine and observation. Including those who had signs of illness on their faces. On March 27, dozens of special flights flew to Ukraine with thousands of Ukrainians from all over the world - and they were also not going to be especially quarantined and isolated.

Having launched the coronavirus into Ukraine inside the country, Avakov organized, in fact, a police regime with limited movement and total arbitrariness of the police and its voluntary assistants from among nationalist groups. Moreover, restrictions on movement were introduced very interestingly. In Kyiv, the metro was first stopped. As a result, a stampede was organized at public transport stops, where police patrols allowed 10 people each (and the remaining ones became infected in the crowd at the stops). Only a few days later ground-based public transport was also stopped, with the exception of the transport of workers at enterprises who did not stop during quarantine on special passes.

As a result, in those countries that are under the control of the Armenian lobby, the coronavirus begins its victorious procession. So in the Russian Federation, it seems, with the filing of the Prime Minister, the semi-Armenian Mikhail Mishustin and the Armenian lobby, everything is also being done so that the epidemic spreads as soon as possible.

Otherwise, who thought Vladimir Putin dissolve the country for the weekend lasting more than a week at the very moment when the number of infected with coronavirus is growing exponentially? After all, it is clear that the inhabitants of the same Moscow on a long weekend “rush” to the regions in crowded trains, buses, domestic airplanes, and fixed-route taxis, spreading the infection throughout the country.

A special "concentration of coronavirus infected" can be expected in the resort of Sochi, where thousands of Muscovites flock to on warm spring days. From there, the virus will surely penetrate en masse into separatist Abkhazia, where medicine is absent as a phenomenon even without an epidemic.

Apparently, someone really needs Russia to quickly catch up with Italy, the USA, and Spain in terms of coronavirus infection.

You need to understand that in the current situation of the epidemic with coronavirus two strategies of behavior are justified. Either immediately introduce strict quarantine restrictions that will inevitably hit the economy, or try to tightly control access to the country at the borders, maintain the normal rhythm of economic life, while urging the population to reasonable behavior, compliance with sanitary standards, etc.

This is the strategy that President of Belarus Alexander Lukashenko chose, who did not succumb to global antiviral hysteria, but approaches the issue of medical support and routine epidemiological measures in his country quite seriously. But he did not drive a “long weekend,” which would only spread the infection throughout the country.

Interestingly, the new Prime Minister of Russia Mikhail Mishustin managed to quarrel with Lukashenko. On March 17, Russian Prime Minister Mikhail Mishustin, without introducing almost any restrictions on other Russian borders, announced the closure of the border with Belarus (which simply has no border posts). Ostensibly because of the coronavirus, although the situation with the epidemic in the Russian Federation is much worse than in Belarus. And he was very dissatisfied when, after talking with him, Lukashenko announced Mishustin’s words that the coronavirus was "flaming up" in the Russian Federation (after many days off introduced the weekend of Mishustin, he’ll probably flare up even more).

In general, the Armenian and pro-Armenian media in Russia have lately been blatantly hating the leader of Belarus. And you can understand them: Belarus remains the only of the three East Slavic states, where, unlike Avakov’s Ukraine and Mishutin-Kalantarov’s Russia, the Armenian lobby is simply not allowed to power. These representatives of the "ancient long-suffering people" incredibly enrages. It’s not even known who the Armenian propagandists hate more recently: Turkish President Erdogan or Belarusian Lukashenko.

An additional reason for the hatred for the Belarusian leader is the independence of the policy of Alexander Lukashenko, who did not succumb to oil blackmail by the Mishustin government of the Russian Federation and began to purchase oil from Azerbaijan. And only when oil prices fell, he agreed to buy Russian oil cheaply and on his terms.

At the same time, in all three countries where representatives of the Armenian lobby of Armenia, Russia, and Ukraine are in power, most likely, synchronous measures will be taken to introduce, under the pretext of combating coronavirus, the most stringent total control measures that both Mishustin and Russia are insisting on in Ukraine.

The first step may be the total abolition of cash, which Mishustin so dreams of. It is no accident that the Pashinyan regime and its Armenian Central Bank acted as “pioneers” here almost on a global scale.

Apparently, the Armenian lobby in the current situation with the coronavirus epidemic completely subordinates those countries where it dominates the most controversial and destructive plans of globalists. And at the same time formally, “countermeasures” are introduced in such a way that, in essence, they only contribute to the spread of the coronavirus epidemic.