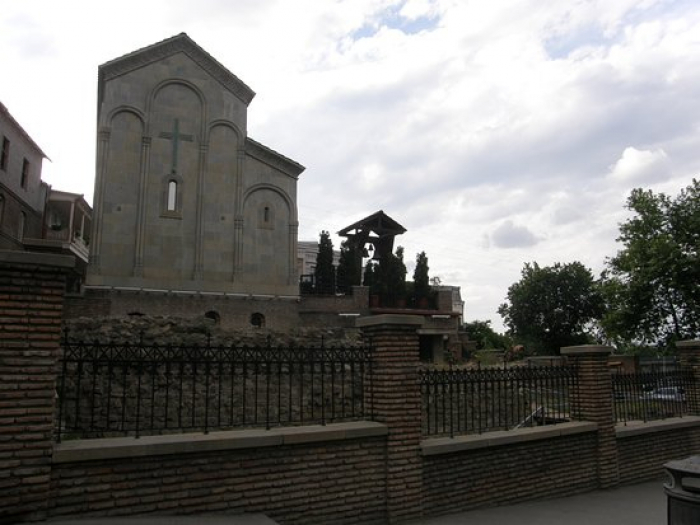 The references available about St Forty Martyrs of Sebaste Church are the following:

The first mention of St Forty Martyrs of Sebaste Church in Georgian hagiographic literature occurs in The Martyrdom of Abo by Ioane Sabanisdze. On Friday, January 8, 786, Abo, Arab martyr for Christian, was taken out from the fortress (Narikala) and an Arab executor “beheaded him at the portal of St Holy Forty Church.”

Another reference is by Pl. Ioseliani, telling that Greeks and Armenians disputed over this church and claimed their rights.

Prof. Melikset-begi found the following in the work of the Syriac writer Bar Hebraeus (Abulpharagius): in 1197, there was a clash between Georgians and Armenians concerning the celebration of Easter. Armenians did not agree to celebrate the holiday a week earlier than Georgians. Georgians burned the church; 40 thousand Armenians were involved in the conflict, 4 04 40 Armenians were killed. Everything ended so that Georgians as though paid 100 thousand Dinars for the restoration of the church and thousand Dinars for each killed Armenian.

The reference about Tbilisi as a scene of Georgian-Armenian clashes has not been considered trustworthy by some Georgian scholars, believing that, under Queen Tamar, nobody would have dared it; it is composed by some malevolent historians in order to state that in 1127 the church was not Georgian and to allow following ones to render it as an authentic source and a fact.

My comment on the viewpoint in question is the following: first, the clash took place in 1179 and not 1127; second, L. Melikset-begi assumed that the conflict might have occurred at St Forty Martyrs of Sebaste Church in Tbilisi. This assumption was not accepted as “an authentic source” by anyone except P. Muradyan, S. Karapetyan, and other Armenian scholars. As for the argument that under Queen Tamar nobody would have dared it, this is not unconvincing. Religious conflicts were possible; such clashes were more widespread in Europe and Asia in the medieval centuries.

In my opinion, judging from the tolerant nature of the Georgian people, that such a clash took place because of Easter celebrations. Georgians respected all religions. This is best illustrated by the presence of an Orthodox Christian church, a Catholic church, a Muslim mosque, a Jewish synagogue, and an Armenian cult monument in a single neighborhood within Tbilisi. If the clash, described by Bar Hebraeius, actually took place, that it would have been due not to the date of Easter but rather some more serious factor.

With a vie to the Armenian clergy’s morbid historicism and disease of misappropriation of others’ churches and monasteries, probably, they tried to capture St Forty Martyrs of Sebaste Church in Tbilisi which annoyed the ethnic Georgian population and the clash took place.

As far as the reference is not based upon a source, L. Melikset-begi assumes that the Syrian writer heard an oral narrative from his fellow countrymen from the Caucasus. He also doubts that the number of killed Armenians is correct.
Irrespective of the aforementioned, L. Melikset-begi, however, tried to transfer the Georgian-Armenian conflict to Tbilisi and associate it with St Forty Martyrs of Sebaste Church. For the sake of this, he refers to the 13th-century Armenian scholar Vanakan Vardapet (Hovhannes Tavushetsi), according to whom in 1226 he sold the Armenian manuscript Gospel at St Forty Martyrs of Sebaste Church in Tbilisi.

P. Muradyan needed to transfer the dates because he knew that in 1226 Jalal ad-Din Mingburnu ravaged Tbilisi and its churches; it was disregarded by L. Melikset-begi. Jalal ad-Din’s hordes would not have spared St Forty Martyrs of Sebaste Church either. Thus, Vanakan Vardapet would not be able to make a note on the Gospel in the destroyed church. Muradyan considered that factor and moved the date for 12 years to allow the assumption that, for twelve years, the church would be restored and, hence, a note made on the Armenian Gospel in it would not be questioned.

This is why he needed to manipulate the dates.

The authors adequately comment on the note: “St Forty Martyrs of Sebaste Church might not have survived destruction (1226). It is slightly non-serious to assume that someone sold a newly copied (perhaps, expensive as well) Armenian Gospel in the deserted city.

I believe that it is not “slightly non-serious” but rather a groundless point, confirming that Vardapet’s note is a fraud. Armenian clerics have been known to have been masters of such fabrications.

Let us go back to Ioane Sabanidze according to whom there was St Forty Martyrs of Sebaste Church in 786. The question is: Was it the Georgian Orthodox Christian Church or the Armenian Monophysite one?

According to Gyut Aghayants, St Forty Martyrs of Sebaste Church was the oldest Armenian church in Tbilisi which in 754 was built by Safraz Jughaetsi (Journal Taraz, No 1-2, 1919; p. 45 [in Armenian]); however, he does not refer to any source. Hence, it cannot be assumed as scholarly proof.

L. Melikset-begi does not support the sadi date (754) but sees some truth in this reference and cautiously recognizes the church as Armenian; however, he does not exclude that initially, it was Chalcedonian.

P. Muradyan cites some references and tries to show that as if St Forty Martyrs Church was initially Armenian.

The data, drawn by Myradyan, doe not attest that St Forty Martyrs of Sebaste Church was Armenian but rather that, in certain years, Armenians temporarily misappropriated it. It happened when foreign aggressors invaded and ravaged Tbilisi. Armenians made use of those misfortunes and got hold of Georgians’ churches. That was how St Forty Martyrs of Sebaste Church used to appear to be repossessed by Armenians. This is what happened during the invasion of Agha Muhammad Khan Qajar (1795); Armenians embezzled the Georgian churches: St George of Teleti, Tsavkisi, Shavnabada.

S. Karapetyan and other Armenian authors are well-known biased scholars; it is not a surprise that they try to demonstrate that St Forty Martyrs of Sebaste Church (and not only it) is Armenian; however, they have no basis for that.

Apparently, St Forty Martyrs of Sebaste Church was built before the Arab invasion (642-643), and even earlier. It was the church of indigenous Georgian Orthodox Christians and that of visiting Armenians, contrary to what some Armenian scholars try to demonstrate. As a matter of fact, an Arab executor did not care where he would behead Abo, either in front of a Georgian Orthodox Christian church or of an Armenian Monophysite cult facility; however, it was not all the same for the Georgian Orthodox Christian writer Ioane Sabanisdze, as far as it was a principal religious factor for him. Abo was martyred for the Orthodox Christian faith and not for the Armenian Monophysite (profane) religion. Had it been so, Ioane Sabanisdze would, by all means, mention that Abo was beheaded in front of the Armenian church after St Forty Martyrs. As far as he did not mention that, it means that the church was Georgian. As a matter of fact, had it been Greek, he would have mentioned it as well. it has been accepted in scholarly literature that Ioane Sabanisdze has described facts realistically and accurately; however, we should better return to the history of the issue in point. In Prof. S. Kakabadze’s opinion, St Forty Martyrs of Sebaste Church was built in the 5th c., under King Vakhtang Gorgasali. In that period, Kartli began to get oriented towards Byzantium. It should also be considered that King Vakhtang’s second wife was ethnic Greek, and the queen might have been accompanied by numerous retinue and servants from Greece; this circumstance might have evolved in the necessity of constructing of a Greek church. To his mind, St Forty Martyrs Church could not have been built in the 6th-7th cc. as far as there were no appropriate conditions for this in Kartli, and, specifically, in Tbilisi.