The Georgian Orthodox Church is with the people, and the Armenian Catholicos Garegin II tried to escape from the coronavirus, leaving the flock 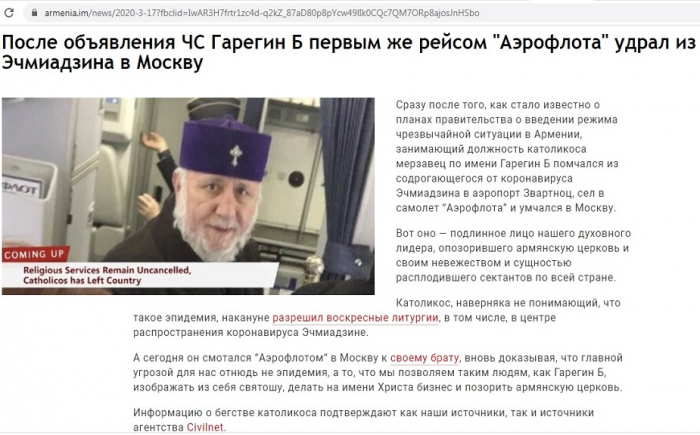 In the difficult days of the outbreak of the coronavirus epidemic, the Georgian Orthodox Church is doing everything to raise the spirit and strengthen the faith of its flock. In the temples, there is a prayer. The Georgian Patriarchate called on clergy and believers to pray especially for those who are infected with the coronavirus, and those who spare no effort in their recovery. And on March 17, with the blessing of the Catholicos-Patriarch of All Georgia Ilia II, clergymen consecrated the streets of Tbilisi.

The water was consecrated in the Cathedral of the Holy Trinity - Sameba, from there the clergy on off-road vehicles, went to different parts of the city to consecrate the streets. In addition to the consecration of the streets, clergy call believers to prayer. In addition, a decision was made after each service to consecrate the places around the church and the surrounding area with holy water. On March 20, a meeting of the Holy Synod in the Georgian Patriarchate will be held, which will be devoted to combating the spread of coronavirus. The main topic will be the situation that has developed in the country due to the coronavirus pandemic, and what role the Church has in overcoming this problem.

Catholicos-Patriarch Ilia II himself sets an example. He is not leaving Georgia anywhere. Georgian bishops and priests do not leave their flock. As in previous centuries, the Georgian Orthodox Church and its clergy together with the Georgian people in the days of the most difficult trials.

Now let's see how the head of the Armenian Apostolic Church (AAC) behaved in a difficult situation of an impending epidemic. The one that only officially claims to 442 Georgian churches (but actually most of the Georgian churches). The very same AAC, which illegally appropriated all Georgian churches on the territory of the Republic of Armenia without exception.

Recall that in the Republic of Armenia, almost the majority of those infected with the coronavirus was initially detected in Echmiadzin, where the residence of Catholicos Garegin is located. According to some reports, this provoked a mood close to panic among part of the clergy of the AAC. And Geregin II himself, instead of remaining with the flock, tried as soon as possible to slowly flee to a safer place. Moreover, Armenian sources themselves write about this.

The Georgian Orthodox Church, like the government of the country, calls on parishioners to refrain from going abroad and not leave Georgia for the period of a pandemic unless this is absolutely necessary.

Here is a note from armenia.im: “After the state of the emergency call, Garegin B flew the first Aeroflot flight from Echmiadzin to Moscow” (https://armenia.im/news/2020-3-17) we give it in full:

“Immediately after it became known about the government’s plans to introduce an emergency regime in Armenia, the Catholicos bastard named Garegin rushed from the trembling Echmiadzin coronavirus to Zvartnots airport, got on an Aeroflot plane and rushed off to Moscow.

Here it is - the true face of our spiritual leader, who dishonored the Armenian Church and, with its ignorance and essence, has propagated sectarians throughout the country.

The Catholicos, who probably does not understand what the epidemic is, on the eve allowed Sunday liturgies, including in the distribution center of the coronavirus Echmiadzin.

And today he flew Aeroflot to Moscow with his brother, proving once again that the main threat to us is not an epidemic, but that we allow people like Garegin B to pretend to be holy, do business in the name of Christ and shame Armenian church.

Information about the Catholicos’s flight is confirmed by both our sources and those of the Civilnet agency. ”

In principle, this is an internal matter of Armenia and the Armenian Church - the behavior of Catholicos Garegin II. But the question arises among the Armenians themselves about the moral level of the leadership of the AAC.

However, as is known from the point of view of Orthodoxy, the Armenian church is heretical. There is no Grace in it. Therefore, it is in vain to expect from heretics high morality, courage, and selflessness in difficult times.

With a similar level of morality in Georgia and the Georgian Church, one can expect any surprises from the AAC regarding its absolutely deceitful and unfounded claims to Georgian shrines. Hereby, heretics can by cunning, falsifications and lies to seize and appropriate another's without stopping at nothing. They have long been "trained" in this matter (which is just what the capture of the Albanian Church by Etchmiadzin is worth).